Thank Holiday: PM to back NEW bank holiday to honour the Queen

Royals: Queen ‘saving up her energy’ for Platinum Jubilee events

The move, which will give 66 million Britons something to cheer after two Covid-ravaged years, is also backed by Chancellor Rishi Sunak who was “looking at proposals carefully”. The Thank Holiday will become a fixture of the calendar from next year in recognition of The Queen’s devotion to public service. But it will also be a nod to the sacrifices of ordinary Britons who served their communities throughout Covid, the greatest health emergency in living memory.

The move, which will give 66 million Britons something to cheer after two Covid-ravaged years, is also backed by Chancellor Rishi Sunak who was “looking at proposals carefully”. The Thank Holiday will become a fixture of the calendar from next year in recognition of The Queen’s devotion to public service. But it will also be a nod to the sacrifices of ordinary Britons who served their communities throughout Covid, the greatest health emergency in living memory.

Brendan Cox, the campaigning husband of murdered MP Jo Cox and driving force behind the idea, said: “The last two years have been tough for us all, but we have also seen what we can do when we pull together. This is a brilliant, warm, generous country and no one represents that better than our Queen. So what better way to mark the Platinum Jubilee than with a new permanent Thank Holiday – an annual opportunity to come together and celebrate what makes our communities great.”

The campaign – revealed exclusively in and backed by this newspaper last year – has garnered support at the highest level.

Experts said the bonus day off, endorsed by the Confederation of British Industry, would pump billions into the economy. The Treasury will now embark on a detailed cost analysis, before a final decision is made by Mr Johnson.

The multi-million pound business heavyweight said: “The Great British Bank holiday is enjoyed by one and all across society. We all have fond memories of trips away, gatherings with friends, or just enjoying some relaxing time with loved ones. But it’s also a major boon for many businesses – especially those sectors that have struggled during the pandemic.

“I think it will be a fitting tribute to Her Majesty’s 70 years of public service, and that of all the people who make our communities kinder, nicer places to live. But I also think the Thank Holiday will provide the country with a social and economic stimulus we need after a difficult few years.” 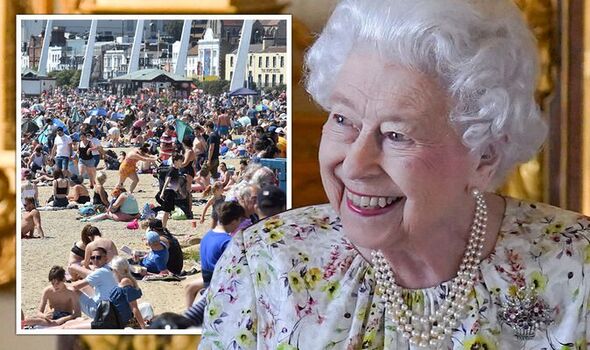 The Thank Holiday will become a fixture from next year in recognition of The Queen’s devotion (Image: Getty)

The call for this year’s extra Jubilee bank holiday to be made permanent from 2023 would bring the total in England and Wales to nine, still considerably lower than many European countries including Germany and France who enjoy 11. England and Wales currently enjoy just eight bank holidays compared to the EU average of 12.8 days off. Scotland has 11 while Northern Ireland has 10.

The news that Mr Johnson will sanction an extra day off comes as the UK gears up for the Queen’s Platinum Jubilee jamboree in June.

Royal biographer Gyles Brandreth, 74, added: “We need this day more than ever. To remind us what connects us, to create an excuse to engage our neighbours in something more than small talk and to express our thanks to a lifetime of service to Her Majesty the Queen. It is, as they say, for Queen and Country.”

The campaign is also backed by charities and businesses including the Royal Voluntary Service, UK Hospitality and Trades Union Congress.

Adventurer Bear Grylls, 47, said: “Our Queen is a shining light – someone who serves our communities, day in and day out. She represents the very best of our national character.

“The Queen deserves our thanks for her incredible lifetime of service, and so do millions more across the country for their own daily acts of sacrifice, love and support.

“A Thank Holiday each year in honour of the givers, the heroes, the ones who deserve it most would be a fitting legacy to the Queen’s extraordinary life and generosity.”

Bank holidays can be changed by Royal Proclamation. If a bank holiday is set by legislation, the Queen can proclaim it will be changed to a different day.

The Queen can also proclaim extra bank holidays. This most recently happened in 2012 to mark her Diamond Jubilee.

Backing for an official extra day of rest comes as Britain prepares for a four-day jamboree to mark the momentous Platinum Jubilee.

On June 5 – the final day of the weekend – communities across the UK will come together for National Thank You Day. It will be a chance for a grateful nation to pay reverence to a monarch who has led by example.

Former Tory leader Iain Duncan Smith said: “I support this idea of a holiday to celebrate Her Majesty the Queen’s Jubilee but also at the same time the nature of who we are as a nation. As we come out of the pandemic, where so many people have sacrificed so much we have much to be proud of and The Queen’s own dedication and service represents that so well.”

Research by PwC found sectors torpedoed by the pandemic, including retail, hospitality and tourism, would greatly benefit from additional economic activity an extra day off would generate.

Tony Danker, director general of the CBI, said: “The proposal for a new Thank Holiday to recognise the Queen’s selfless service and to extend that notion of service across communities is a really exciting one. “Business is keen to support and we at the CBI will work with supporters and employers to make it a real success.”

Kate Nicholls, chief executive of UK Hospitality, added: “It is time for a Thank Holiday to mark the astonishing and enduring service of Her Majesty the Queen. Such a day would also provide the chance to recognise the fortitude of the entire nation, and local community heroes, in pulling through the challenges of the past two years.”

Kate shows up in support

The Duchess of Cambridge made a surprise joint appearance with husband William at Westminster Abbey for Anzac Day, writes Royal Correspondent, Richard Palmer.

She was a late addition to the royal party honouring Australia and New Zealand’s war dead at events in London – aides said her diary commitments had changed.

The Duke had been due to attend, and Kate’s arrival came as the future of the monarchy in those countries and in 12 other realms was put in the spotlight.

The Cambridges – likely to tour Down Under next year – have said they will serve all 54 Commonwealth lands, whether they retain the monarch as head of state or not. The pair’s recent tour of Belize, Jamaica and the Bahamas was hit by issues over slavery, colonialism and calls to ditch the monarchy.

In the white McQueen coat dress she wore to daughter Charlotte’s christening in 2015, inset right, Kate, 40, and William, 39, joined Australian and New Zealand expatriates at the Abbey.

Earlier he laid a wreath on behalf of the Queen at the Cenotaph, 107 years after First World War landings at Gallipoli left 36,000 Australians and New Zealanders killed or wounded. The Very Rev Jo Kelly-Moore, Dean of St Albans and New Zealand Society UK chaplain, asked the congregation to pray for people in war-torn Ukraine too.

Meanwhile the Queen used her 96th birthday Sandringham break to visit her beloved horses. In a trademark headscarf, she was driven by racing manager John Warren to the Royal Stud.

Kate topped the dress off with a Jane Taylor headband (Image: Getty)

Every woman has a favourite outfit she uses time and again, writes Fashion Editor, Emma Johnson.

And this classic Alexander McQueen ivory design could well be Kate’s.

She debuted it at Charlotte’s 2015 christening, wore it again at Trooping The Colour the next year and then to mark the centenary of the Battle of Passchendaele in 2017.

Kate topped it off with a Jane Taylor headband. Stylish, sustainable – no wonder she has it on repeat.