Horizons may have shrunk once again, with non-essential trips banned and flights cancelled for the next few weeks — but don’t let that stop you seeing the world.

Go online, find the right webcam (video cameras streaming live internet pictures) and you can soon feel as though you’re almost — but not quite — in your favourite spot or dream destination.

How better to escape the confines of your living room than to immerse yourself in ‘live time’ in another country and culture, or somewhere in the UK? And look forward to when you can actually be there… 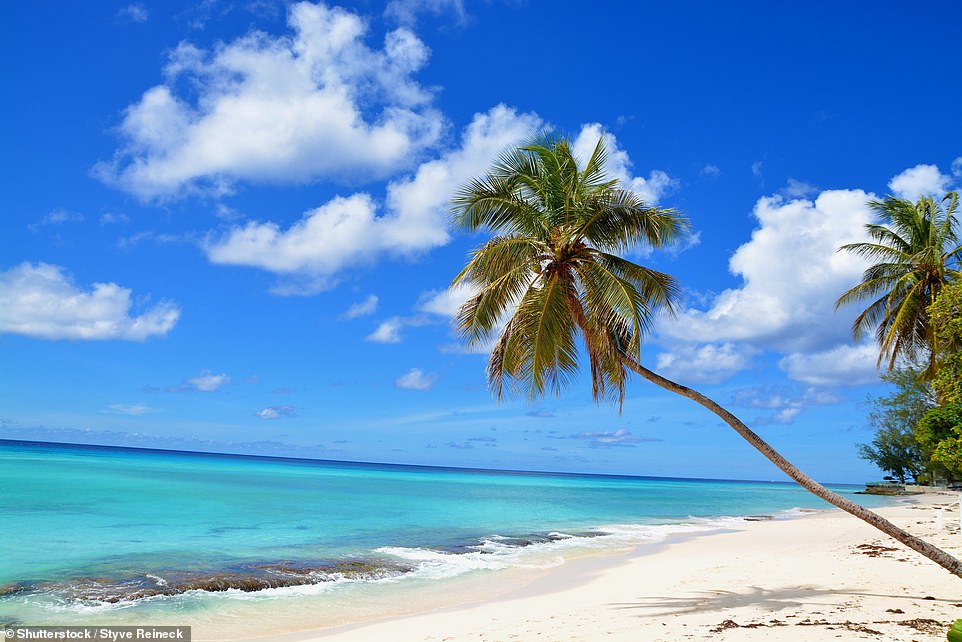 You can watch the waves and the palm trees on the beaches of Barbados, including Accra Beach, pictured, on the webcam page of Barbados.org (picture not from webcam)

Listen to breaking waves and watch palm trees flutter on the beaches of Barbados via the webcam page of Barbados.org. It’s wonderfully relaxing. Barefoot tourists stroll across the soft sands as seabirds swoop by — you can almost feel the breeze off the water.

For other islands including St Lucia and Jamaica, see Livebeaches.com, which has a good ‘Best Webcams in the Caribbean’ section. One camera on St Maarten, set up by the Sunset Beach Bar, faces a pretty curve of sand above which planes occasionally swoop to land at the tiny island airport: all part of the webcam show.

WHEN THE TIME COMES: Seven nights all-inclusive at Sandals Barbados from £1,910 pp in April with Heathrow flights (britishairways.com). 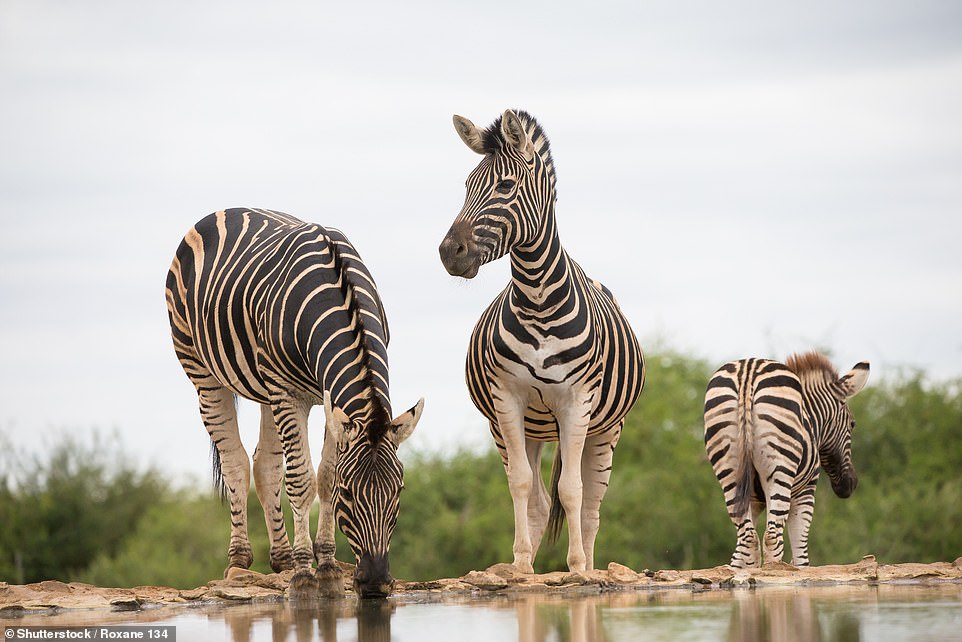 On Explore.org’s Live Cameras in Africa section, you might be able to spot zebras in the Madikwe Game Reserve, pictured, in South Africa (picture not from webcam)

Leopards, lions and giraffes can all feature — if you are lucky — on the brilliant ‘Live Cameras in Africa’ section of Explore.org.

Spot zebras swishing their tails by a waterhole in Madikwe Game Reserve in South Africa, kingfishers diving into the muddy water of the Olifants River, also in South Africa, or elephants munching contentedly on shrubs in Laikipia County in Kenya.

Get up early to enjoy the sunrise in Africa: a splendid change from a grey winter morning in the UK. Also take a look at Africam.com and Alluringafrica.com for more in South Africa, Malawi and Kenya.

WHEN THE TIME COMES: Eight nights in Kenya from £2,355 pp on a ‘Cheetah Safari’ with most meals and Gatwick flights in May (kuoni.co.uk). 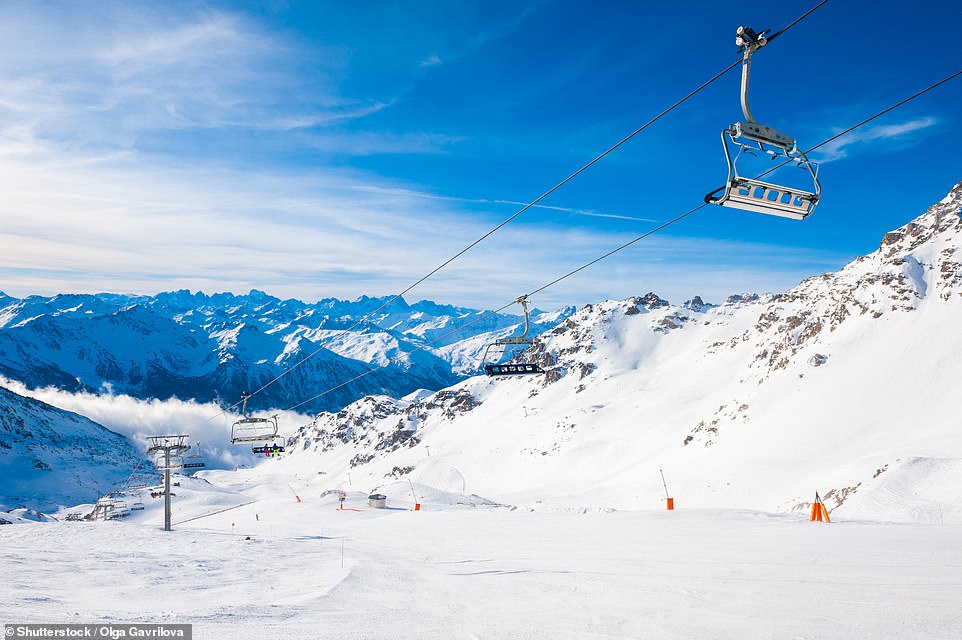 See live shots from the webcams on the snowy slopes of Val Thorens in France, pictured (photo not from webcam)

WEBCAMS THAT CHANGED THE WORLD

Webcams were invented at Cambridge University in 1991, when a version was pointed at a coffee machine in the Computer Science Department.

The longest continually running webcam was at San Francisco State University, from 1994 to 2019.

They began to be used at tourist attractions around the turn of the 21st century, sometimes set up and financed by tourist boards.

At around the same time, hotels, cafes and restaurants realised webcams were a good way of attracting customers to their websites.

Some sites, such as Earthcam.com, Skylinewebcams.com, Livebeaches.com and Webcamtaxi.com, act as hubs for multiple webcam feeds and make good places to browse what’s on offer.

Some webcams require that you watch an advert before ‘going live’ but this is usually for no more than 30 seconds and can sometimes be skipped after a few seconds.

Do you dream of the mountains? The ski season may have been wiped out so far, but it’s still possible to go… virtually. Seeing the live shots from the webcams at Val Thorens in France (Valthorens.com) is tantalising: the snowy slopes, the sunny peaks, all that fresh powder waiting to be explored.

Most resorts have cameras. In Switzerland, where some pistes are open to locals, you can jealously watch skiers at Adelboden on Feratel.com and Verbier on Seeverbier.com. For a wider selection of Alpine resorts, try the ‘Webcams Europe’ page of skiresort.info. To see the slopes at Whistler in Canada, go to whistler.com/webcams. Or for Park City in Utah, U.S., click on the ‘Live Mountain Cameras’ section of Parkcitymountain.com.

WHEN THE TIME COMES: Seven nights all-inclusive at Club Med Val Thorens from £2,015 pp in April, with flights (skisolutions.com).

WONDERS OF THE GLOBE

Listen to the wind whip across the ancient rose-red city of Petra in Jordan, with no tourists where hundreds once came. Birdsong echoes eerily in the surrounding cliffs on Skylinewebcams.com’s ‘Petra — The Treasury’ page. Or watch the ‘Western Wall Cam’ showing the holy centre of Jerusalem with sunlight catching the golden Dome of the Rock during the day at Earthcam.com.

The view from Yavapai Point facing the Grand Canyon in America is updated every few minutes on the National Parks Service website Nps.gov. The same arrangement is in place for Table Mountain on Capetown-webcam.com. Or for a spectacular view of Sydney Harbour, go to Webcamsydney.com.

WHEN THE TIME COMES: Nine-night Classic Jordan tour, with a visit to Petra, from £2,049 pp with hotels, guides and flights (trailfinders.com).

Watch sunset and sunrise over Manhattan in New York as well as other U.S. cities on Earthcam.com within its ‘City Skylines’ section. Pittsburgh, San Francisco and Chicago also feature — it’s fun to zip about the country seeing what’s happening. There’s even one covering the Capitol in Washington DC at senate.gov/general/capcam.htm.

It is often possible to zoom in on specific places. Go to Worldcams.tv for views of Times Square in New York. Try ‘Golden Gate Bridge Live Webcams’ at Parksconservancy.org for San Francisco, or watch the nightly parties on Bourbon Street in New Orleans via Earth.cam (but remember the time difference). 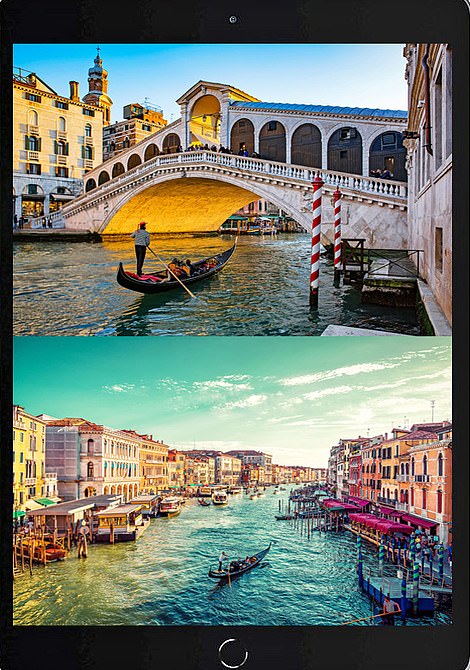 Venice’s Rialto Bridge and Grand Canal, which you can watch on a webcam via skylinewebcams.com (picture not from webcam)

It is strange to watch St Mark’s Square in Venice as a handful of people stroll about. It’s the same at the Rialto Bridge: just the occasional person crossing. Where once tourist hordes descended, now there is solitude. Watch the ‘action’ via Skylinewebcams.com.

The same website covers the Spanish Steps in Rome, the Eiffel Tower and Prague’s old town. For more on Venice, set to classical music, see ’10 Live Webcams of Venice’ at Makotrav.com.

WHEN THE TIME COMES: Eight-night ‘Venice & Verona’ trips with flights from £1,595 pp later this year (kirkerholidays.com).

Perhaps most relaxing of all: go underwater via Explore.org at the Tropical Reef Aquarium in Long Beach, California… and just watch the colourful fish swim about.

WHEN THE TIME COMES: 12-day fly-drives in California with car and accommodation from £1,100 pp, flights excluded (trailfinders.com).

Enjoy views of Eilean Donan Castle by the Kyle of Lochalsh, Scotland, in storms or sunny conditions at Eileandonancastle.com. Take in the surrounding mountains and valleys from the turrets of the romantic 19th-century Neuschwanstein Castle in southern Bavaria, Germany, at Feratel.com.

Or, for something completely different, see inside the Hindu ISKCON Temple in Delhi, India, via Webcamtaxi.com, where the colourful ceremonies are sometimes streamed online.

WHEN THE TIME COMES: Ten-day ‘Essential India’ tours from £1,865 pp including flights and hotels later in the year (transindus.co.uk). 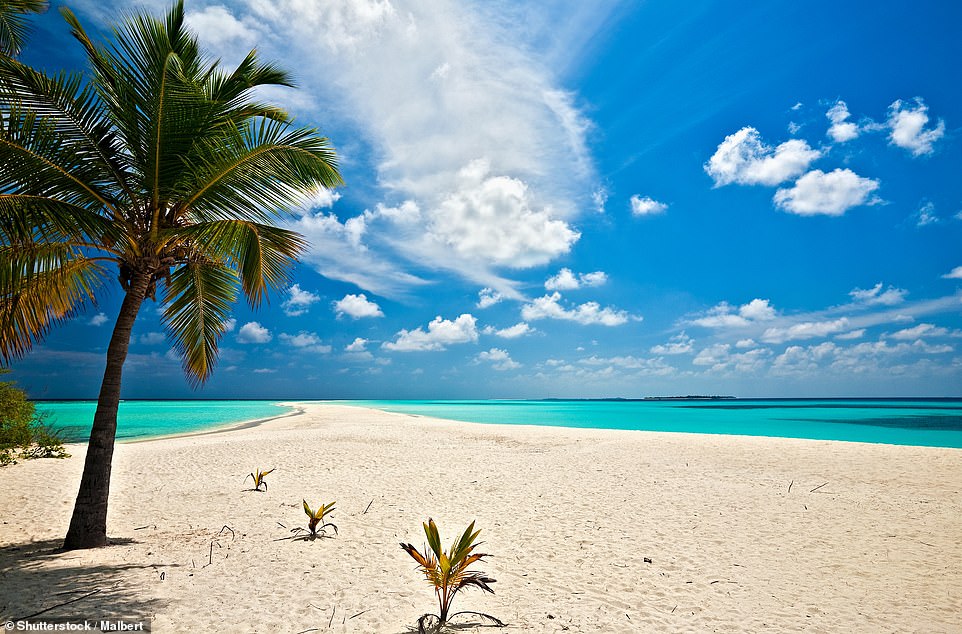 Almost 11 million viewers have logged in to a webcam showing the white sands of Kuredu Island Resort in the Maldives, pictured (picture not from webcam)

Away from the Caribbean, the white sand of Kuredu Island Resort in the Maldives looks so tempting, you may want to book a holiday later in the year. The sound of the waves gently washing on the shore is wonderfully calming, as almost 11 million viewers have already found at Kuredu.com.

Skylinewebcams.com has a page on Copacabana Beach in Rio de Janeiro, Brazil, and the shingle beach by old ochre-coloured buildings in the fishing village of Boccadasse, near Genoa, Italy, which has attracted 17 million hits. Or you can see Miami Beach on Earthcam.com.

WHEN THE TIME COMES: Seven nights full board with flights from Manchester to Kuredu in the Maldives in May from £1,544 pp (tui.co.uk).

ZOOM IN ON ZOOS 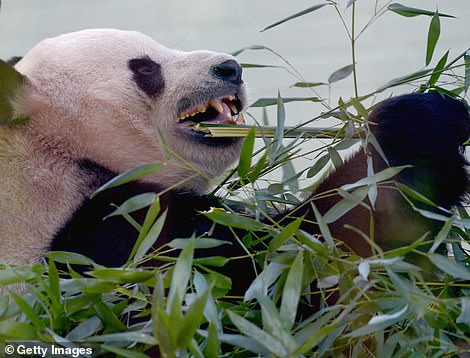 Viewers can watch Edinburgh Zoo’s giant panda Yang Guang, pictured, in his enclosure on one of the zoo’s webcams (picture not from webcam)

Watch the giant panda Yang Guang in his enclosure at Edinburgh Zoo at the ‘Webcams’ page of Edinburghzoo.com. He is incredibly popular — more than 11 million people have clicked in during recent lockdowns. Alternatively, check out the ‘Tiger Camera’ and ‘Penguin Camera’ at Dudleyzoo.org.uk.

Or how about escaping to the Great British seaside? Enjoy views of the harbour at St Ives, Cornwall, from various angles at Skylinewebcams.com and Orangeroofs.co.uk. Or watch the pebbly beach at Bognor Regis in West Sussex in real time at Bognorregisbeach.co.uk/live.

Relax with the view from Rick Stein’s restaurant facing Poole Harbour in Sandbanks, Dorset, at Rickstein.com.

Whitby in Yorkshire has an excellent webcam that shows the abbey, a view up the River Esk and a perspective facing the North Sea at Quaysidewhitby.co.uk. Fine views are also to be had of Llandudno in North Wales, taking in Puffin Island and part of the mountains of Snowdonia at Westshorebeachcafe.com.

WHEN THE TIME COMES: No travel around the UK now, obviously, but stays at the plush St Ives Harbour Hotel and Spa from £186 B&B in April (harbourhotels.co.uk).

Biden to prioritize legal status for millions of immigrants

Sturgeon blasted: SNP spark fury by setting up own ‘college’ to preach nationalism

DR ELLIE CANNON: Why do I get breast pain after a scan gave me the all-clear?