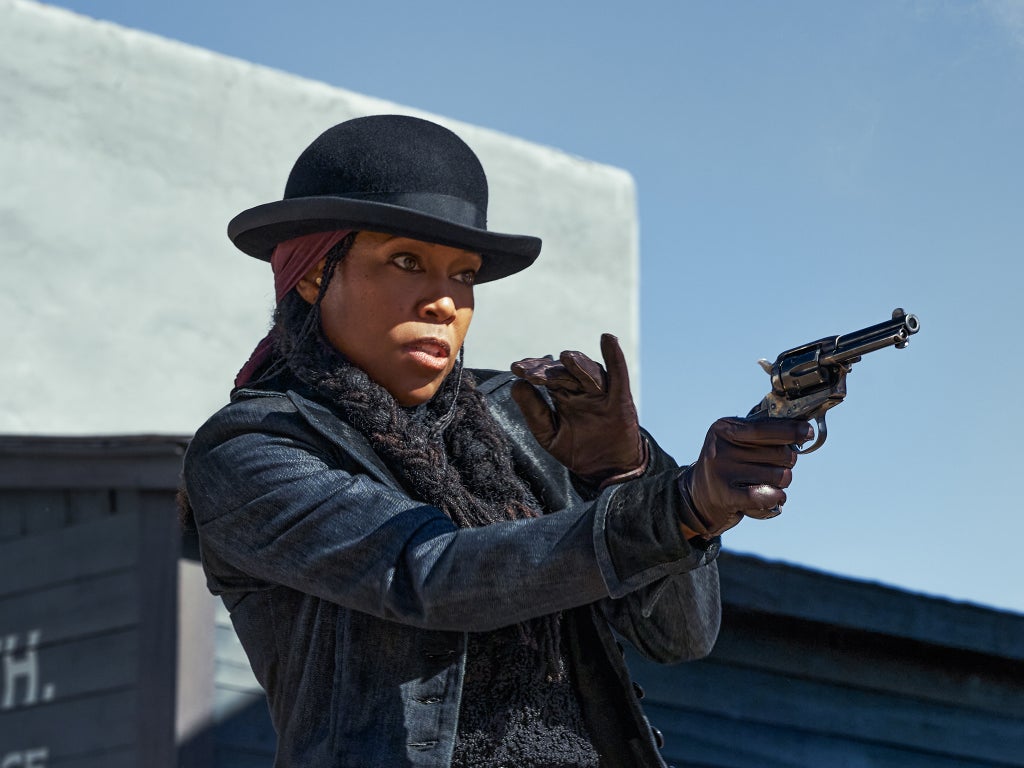 Historical correctives don’t often come in as sexy and stylish a form as Netflix’s The Harder They Fall. The work behind it is rigorous and desperately needed – a firm redress of the whitewashed history of the American West, to better realign it to a historical reality in which a quarter of all cowboys and rodeo riders were Black. It’s a misconception widely perpetuated by Hollywood itself, where Black stars like Woody Strode were treated as rare exceptions in the western genre, in a way that’s only started to shift in the past few decades. And underneath it all lies the uglier truth that the myth of the white cowboy is pure propaganda for the philosophy of “manifest destiny”, a belief by white settlers that they had a right to expand westwards, colonise, slaughter, and destroy native communities.

But musician-turned-director Jeymes Samuel’s film doesn’t simply recite history, it rewrites iconography. Though the names of his characters are all borrowed from real-life figures – Nat Love, Stagecoach Mary, Rufus Buck, etc – the story is pure western fantasy. Nat (Jonathan Majors) sets out on a revenge mission against the man, Rufus (Idris Elba), who murdered his family when Nat was only a child and carved a cross into his flesh as an eternal reminder of the crime. There are heroes: Mary (Zazie Beetz), Bass Reeves (Delroy Lindo), Jim Beckwourth (RJ Cyler). And there are villains: Trudy Smith (Regina King) and Cherokee Bill (Lakeith Stanfield) – though the villains can’t be all that bad since they look so cool and will call out “unscrupulous s***” when they see it.

Samuel and Boaz Yakin’s script neatly fits these characters into the broad archetypes of the genre: the upstart, the romantic, the damsel, the sharpshooting poet. That level of fictionalisation does have its drawbacks – the film erases the indigenous heritage of several of these real-life outlaws, except for Bill and his single, cast-off line spoken in the Cherokee language. But these characters are all so electrifyingly inhabited by a cast of universal, movie-star magnetism. Even Majors, who would be counted as a relative newbie compared to his co-stars, leaps off his roles in The Last Black Man in San Francisco, Lovecraft Country and Loki and arrives here oozing more leading-man confidence than ever.

These actors are the true heart of The Harder They Fall. They feel so giant onscreen, so untouchable, that it feels like they could singlehandedly carve out new legends for Nat Love or Rufus Buck and finally place them on a cultural pedestal as high as Billy the Kid or The Lone Ranger, a character based on Bass Reeves but played by a white actor. Samuel works in the language of iconography – the lone figure on horseback, defiantly stationed on the train tracks. Hands wrapped around golden pistols. Crimson blood wetting a silk neckerchief. The characters themselves seem aware of the weight of legacy, as they boast about who has the quickest draw or the most maligned reputation.

The film is an expansion of Samuel’s 2013 short They Die by Dawn, starring Erykah Badu and the late Michael K Williams, which itself was spun out of his studio album They Die by Dawn & Other Short Stories, produced under the stage name The Bullitts. The Harder They Fall, which happens to be produced by Jay-Z, draws from that musical background through Samuel’s hip hop, reggae and afrobeat-based soundtrack. Every aesthetic decision here seems carefully made, even down to the brightly painted frontier towns (the historically accurate choice), which play in jokey contrast to a literal “white town”, in all meanings of the phrase. That’s what makes The Harder They Fall feel so thrilling – it’s a film that exists in the past, present, and future, all at the same time.