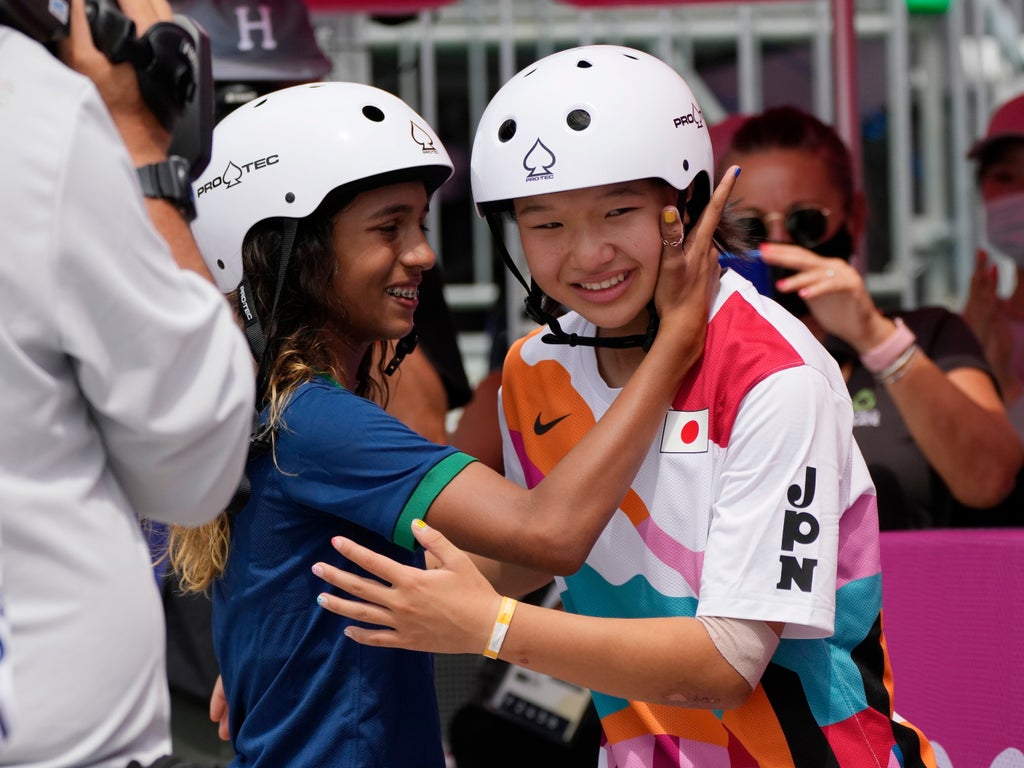 How young are they?

Sky Brown of Team GB, who recently turned 13, has been making all the headlines ahead of the street sport’s Olympic debut, but she is not the youngest competitor in her disciple: Japan’s Kokona Hiraki is just 12.

To put that in perspective, she was born two days after the 2008 Beijing Olympics finished!

But even then, neither are the youngest athletes competing in Tokyo: that honour went to Syrian table tennis prodigy Hend Zaza, also 12, who has sadly already exited the tournament after being beaten by 39-year-old Liu Jia of Austria, which hardly seems fair.

It is skateboarding though that particularly attracts younger competitors, although not exclusively: “The Danish Destroyer”, Rune Glifberg, is a comparatively geriatric 46 and so old he appeared as a playable character in the original PlayStation version of Tony Hawk Pro Skater way back through the mists of time in 1999.

Skateboarding has already seen its first medals handed out in Japan, with Yuto Horigome, 22, and Momiji Nishiya, 13, both winning gold for the home nation at the Ariake Urban Sports Park in the men’s and women’s events respectively.

Nishya was joined on her podium by Brazil’s Rayssa Leal, also 13, and Japan’s Funa Nakayama, 16, giving the trio of medallists a combined age of just 42.

“I have no particular feeling about my age,” Nishiya said afterwards. “That’s really nothing to do with the age.”

Why is their youth such an asset?

Perhaps it’s precisely because the likes of Momiji Nishiya and Sky Brown do not dwell on peripheral factors like their age that makes them so uniquely qualified to excel at their sport.

While older competitors might be burdened by memories of past trauma or more aware of their physical frailties and susceptibility to injury, 13-year-olds are freer to be fearless in the daredevil, risk-taking world of skateboarding.

Speaking about Sky Brown’s potential, BBC commentator Ed Leigh told the i newspaper: “Sky is so talented she could hold this position for two decades, despite the toll. It’s terrifyingly physical and you have to understand how much commitment it takes.

“Anyone who has stepped on a skateboard has fallen off, and there’s a good saying, it doesn’t matter how rich you are, you can’t buy a trick, you have to pay with pain. That’s the only way around it. That’s something shared between all skateboarders. A camaraderie. You know to get that good you’ve overcome some big slams and stayed committed to it.

“Action sports are based in skill acquisition,” he continued. “The younger you are, the bendier and softer you are when you try and get those skills, the quicker you can recover. You have athletes by 21, 22, talking about recovery time, the fact is they can’t just keep skating.”

Why are we asking this now?

After a year’s delay and months of controversy, criticism and hand-wringing about whether it was wise to press ahead amid the coronavirus pandemic, the Tokyo Olympic Games is finally underway and drawing audiences around the world.

Skateboarding is one of several new sports making its debut in Japan and one of the most exciting and keenly anticipated, already bringing fresh energy through performers like American Jagger Eaton, who wore AirPods throughout his runs over the weekend and immediately began broadcasting live on Instagram when he picked up his bronze medal.

Team GB has meanwhile got off to a good start at these Games, picking up three golds on Day Three courtesy of breaststroke champion Adam Peaty, synchronised divers Tom Daley and Matty Lee and mountain biker Tom Pidcock.

There has also been disappointment, not least Jade Jones’s early exit from the taekwondo, but many of our star athletes like sprinter Dina Asher-Smith have yet to take to the track.

Sam Quek: Who is A Question of Sport team captain and Olympic hockey champion?

Climate strikes: Why are young people across the world taking to the streets?