Connor Cruise is killing it in the high seas.

The fishing team of the adopted son of Hollywood heavyweights Tom Cruise and Nicole Kidman took the grand prize at the Sarasota Slam tournament in Florida over the weekend by reeling in a massive Grouper.

Cruise and company caught the fish on Friday, which is actually a Warsaw grouper to be exact, and had it on ice until the official weigh-in on Saturday.

The crowd that had gathered along the docks roared when the presenter for the tournament announced the fish had tipped the scales at a whopping 301 pounds. 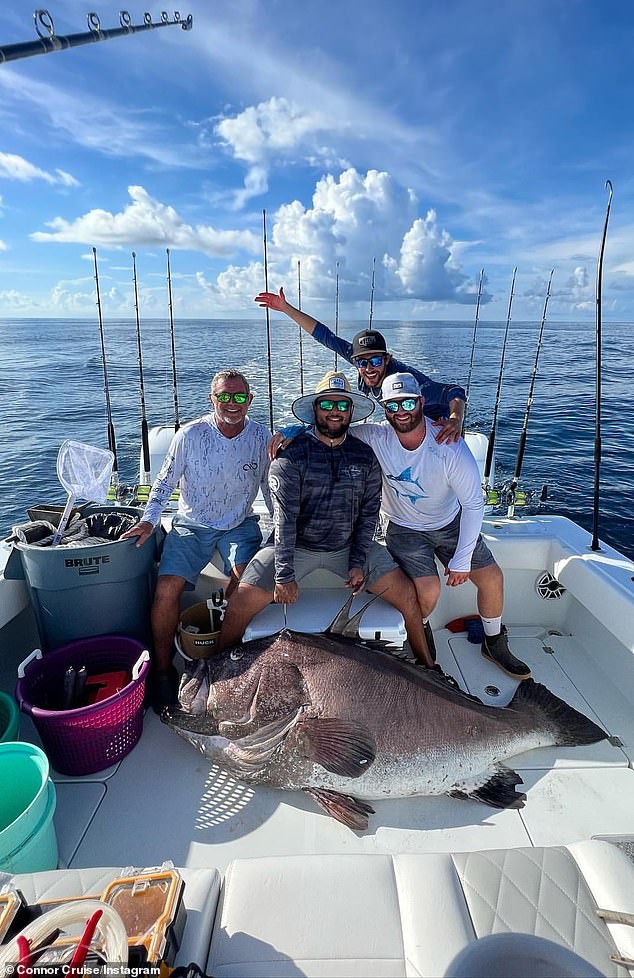 The big catch: Connor Cruise (center), 27, and his fishing team reeled in a massive Warsaw grouper, which was good enough to win the Sarasota Slam fishing tournament in Florida

Dressed in a gray and black camouflage hoodie, grey shorts and a matching baseball cap and sunglasses, Cruise and his team could be seen sharing hugs and high-fives upon the announcement that the fish’s weight was good enough to be the winner.

The four men then gathered together for some photos alongside their big catch.

‘Got it done yesterday with the boys. 301# Warsaw on the hand crank @gomx_fish @freemanboatworks @nick_chicouris_ @thereelborn2catch @fountainofyouthfishing #TopFish,’ he declared in the caption of a video he posted on his Instagram page. 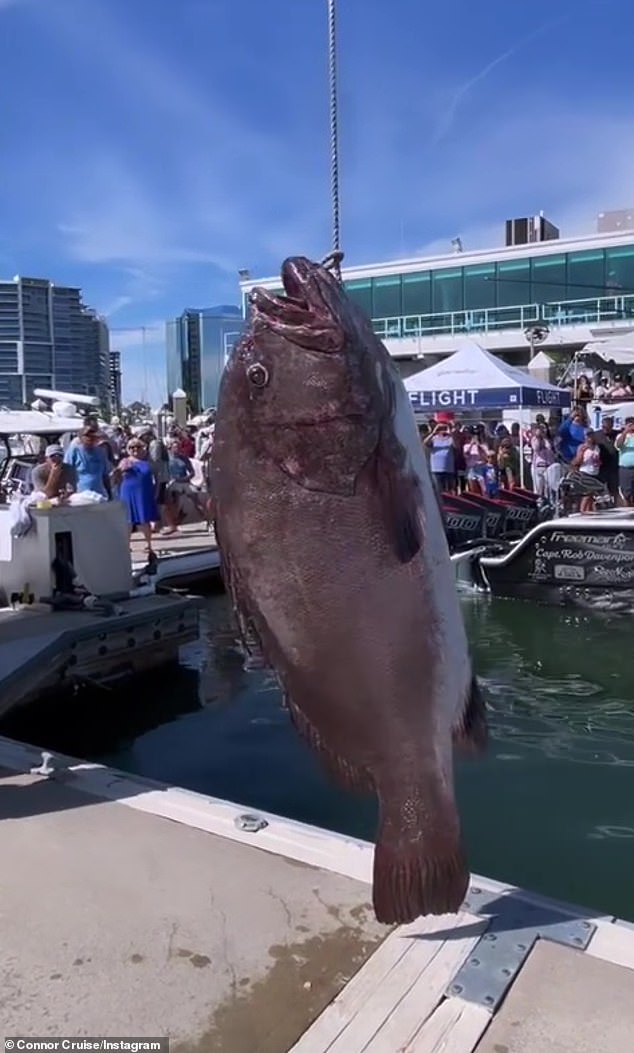 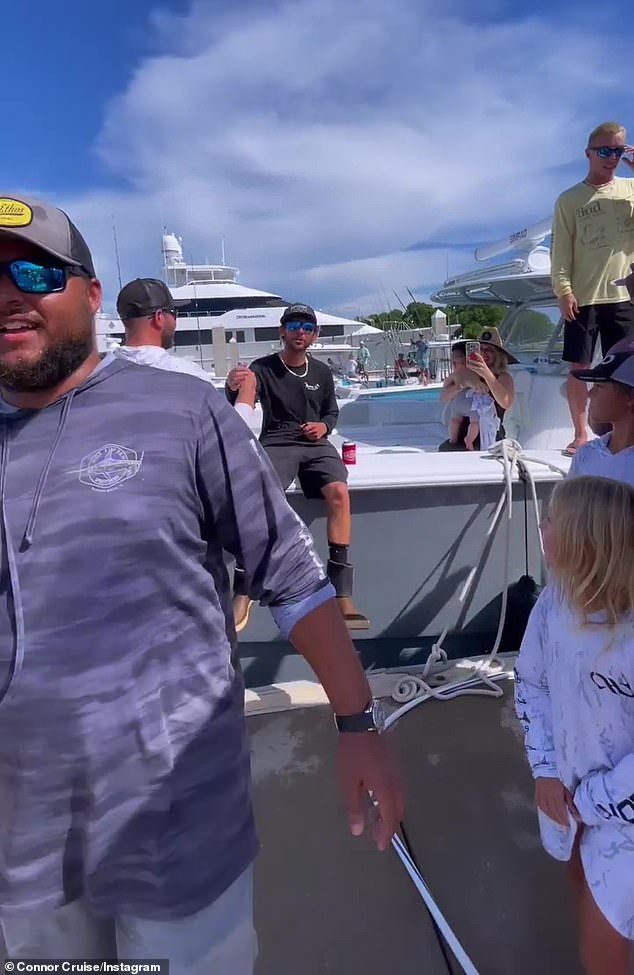 Glowing: Cruise (left) was all smiles when the weight of the fish was revealed. as the winner 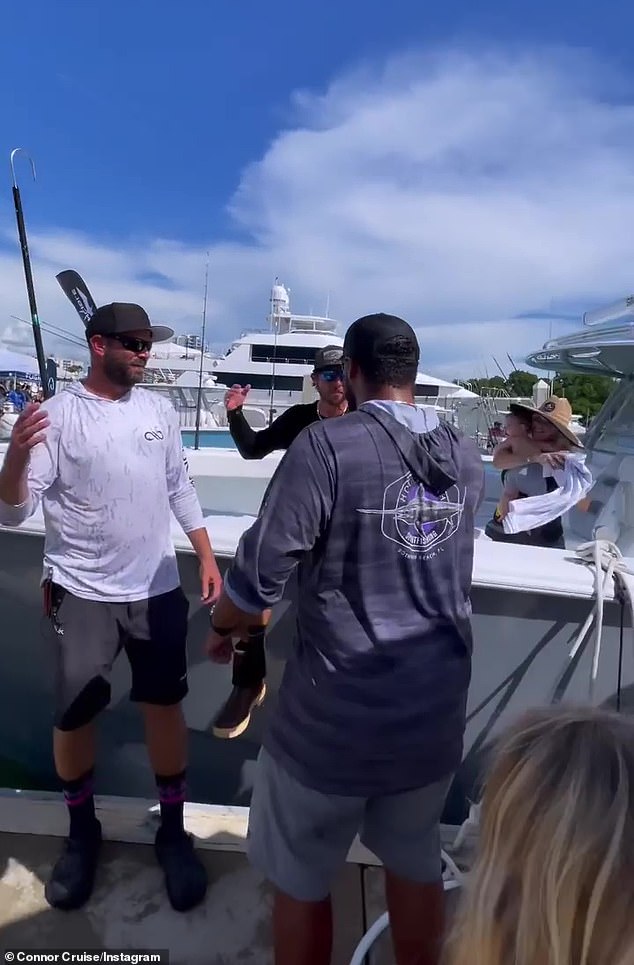 While their 301 pound Warsaw grouper is an impressive haul, this species of grouper can actually grow up to 7.7 feet and weigh 440 pounds, according to the National Oceanic and Atmospheric Administration (NOAA).

The fish is long-lived, up to 41 years, and has a slow growth rate.

While Cruise, 27, has given it a go at following in his parents’ footsteps as an actor, as well as a DJ, he has reportedly directed much of his attention to being a deep-sea fisherman in more recent years. 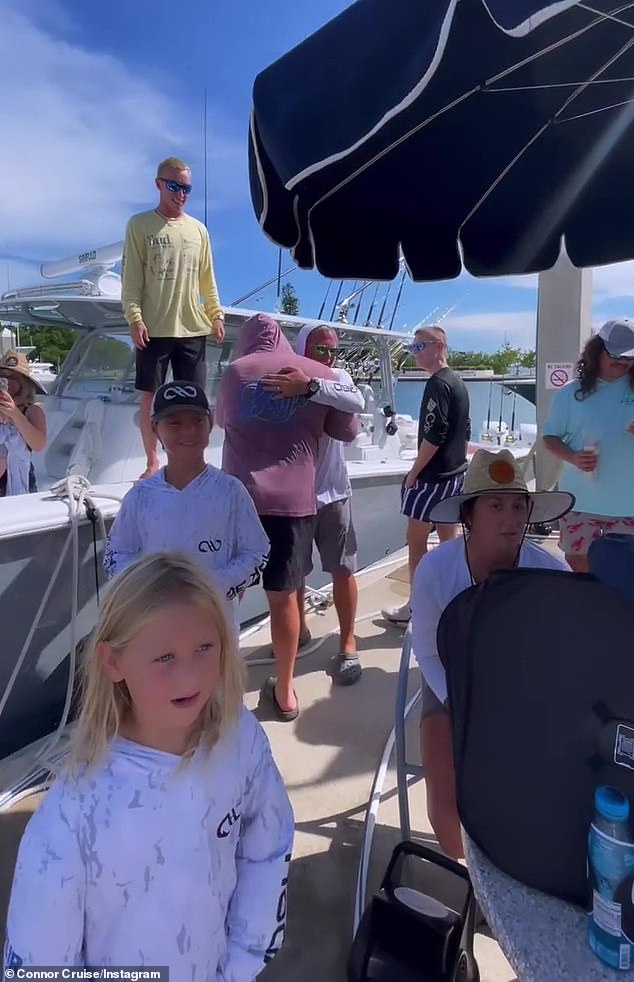 Celebratory: The rest of the fishing team were overjoyed with their big win 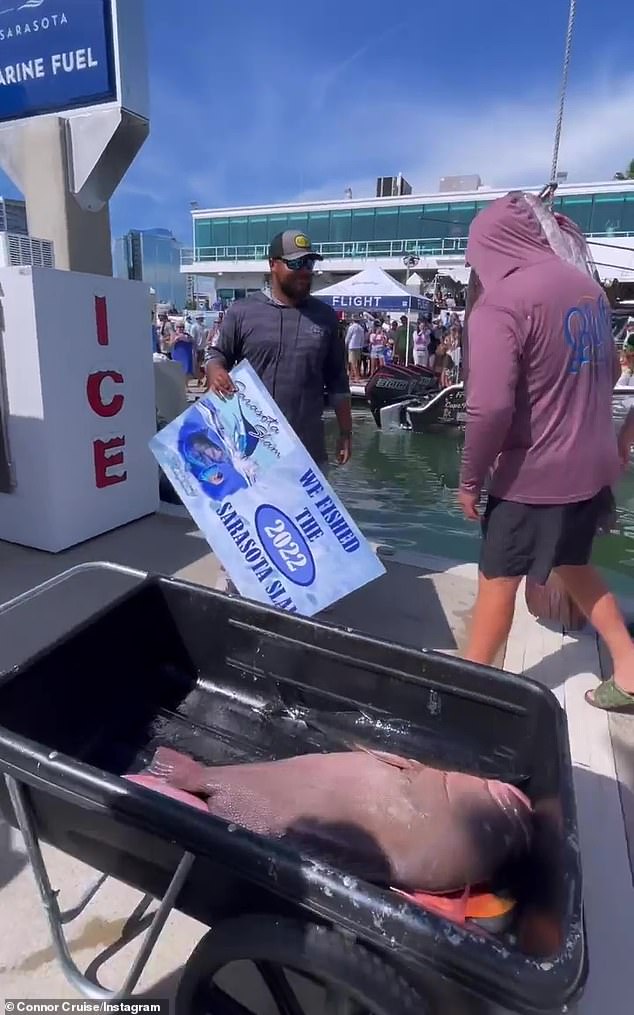 Taking charge: Cruise, who’s a DJ, held a tournament sign for some photos 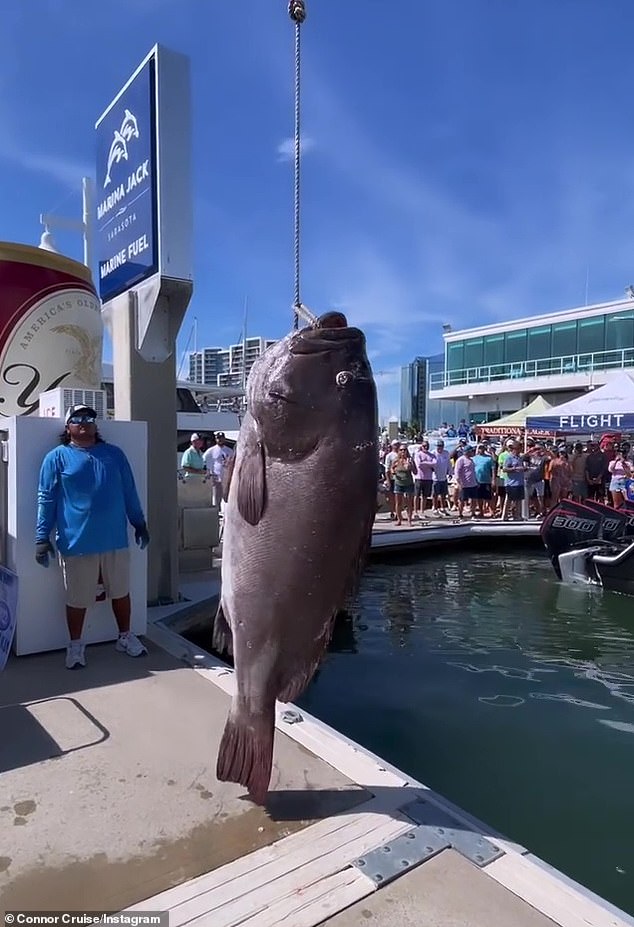 Massive species: While Team Cruise’s 301 pound Warsaw Grouper is an impressive haul, this species of grouper can actually grow up to 7.7 feet and weigh 440 pounds, according to the National Oceanic and Atmospheric Administration (NOAA)

His social media platforms, including Instagram, are filled with photos and videos of himself posing with some of his larger catches that dates back over six years.

In one instance, the avid fisherman showed off a 200-pound yellowfin tuna he reeled in during a fishing trip in 2021.

It turns out Connor has been living in Clearwater, Florida, which makes it easy for him to head out on his deep-sea expeditions.

‘Connor lives in Clearwater, which is the church’s main hub. He still deejays but he has really become a big fishing guy. He’s content with living a quieter life,’ a source told People in February 2021 of the Florida beach town, where the Church Of Scientology has its headquarters. 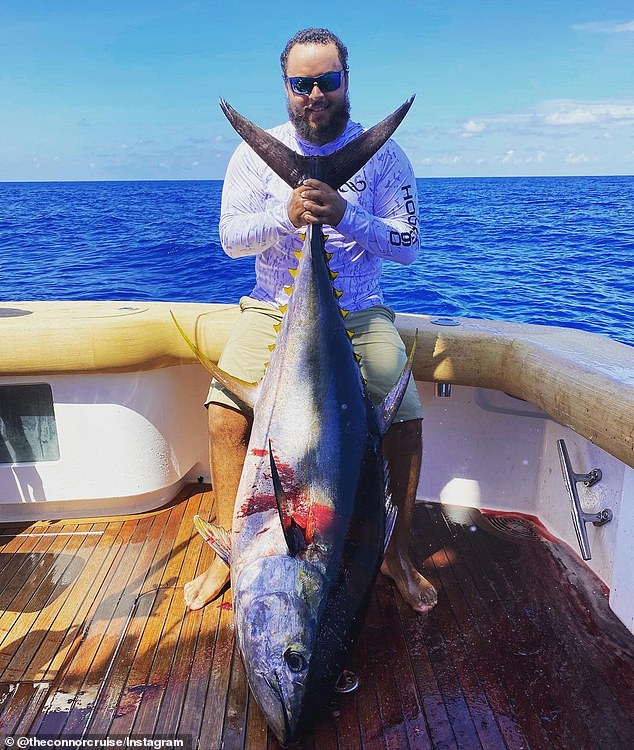 Another big catch: The avid fisherman showed off a 200-pound Yellowfin tuna in January 2021 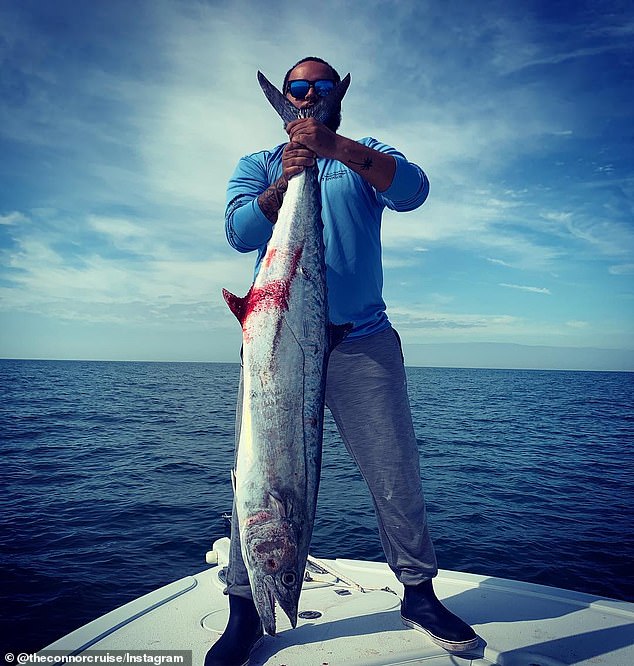 Avid: Cruise has directed a lot of his attention to deep sea fishing over the last six years 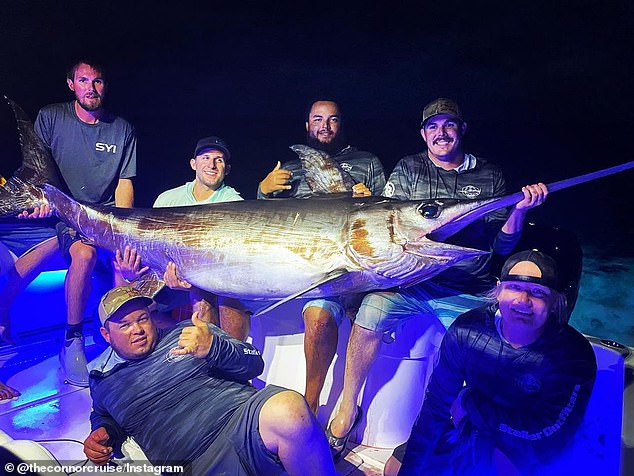 After the big ones: Most of Cruise’s recent posts on Instagram are images of his big catches

The former couple also adopted a daughter, Isabella, in 1992, not long after she was born.

The Top Gun: Maverick star, 60, went on to have a biological daughter Suri, 16, with his third wife, Katie Holmes, while Kidman, 55, went on to have daughters Sunday, 14, and Faith, 11, with her current husband Keith Urban, 54. 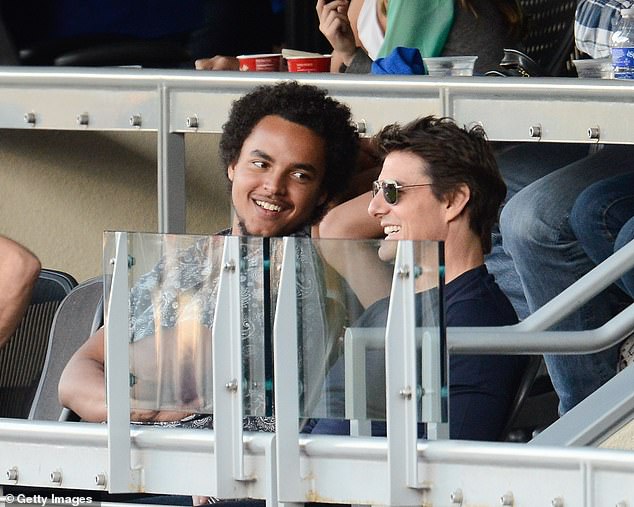 Famous parents: Tom Cruise and Nicole Kidman, who were married from 1990 to 2001, adopted Connor in 1995, about a month after he was born; he is pictured with his dad at a Dodgers playoff game in October 2013 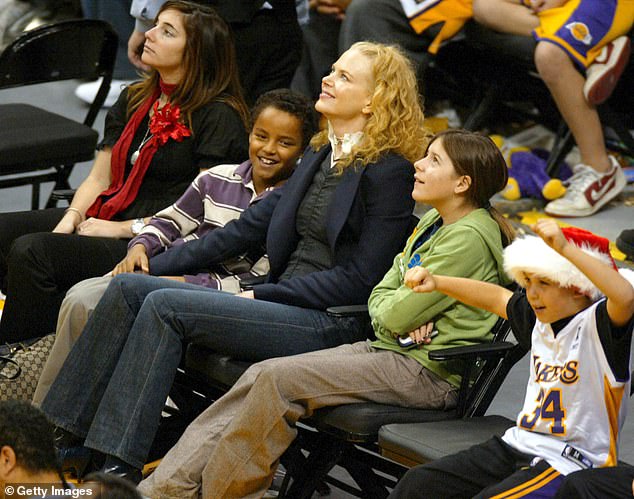 The celebrity life: Cruise and Kidman tried to keep Connor and Isabella out of the spotlight as much as possible during their childhood: Connor and his sister Isabella, now 29, are pictured with their mom in December 2004 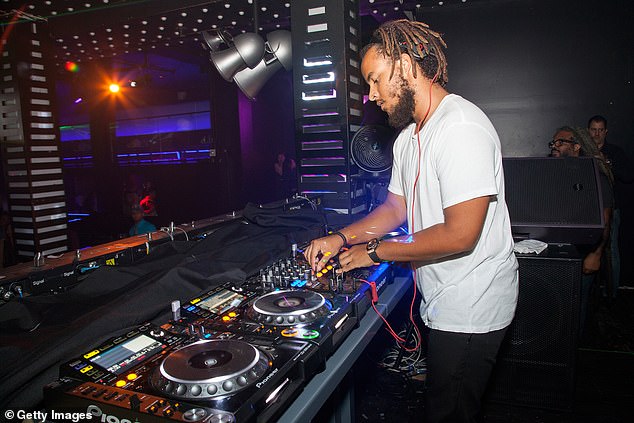 DJ: Connor has been working as a DJ, and has given it a go at acting, but in more recent years he’s directed much of his focus on deep-sea fishing; he is seen in San Francisco in 2016