Tom Daley has revealed his best advice to keeping a happy marriage after five years with his American director husband.

The Olympic gold medalist, 28, spoke to Cosmopolitan UK and gave insight into his relationship with Dustin Lance Black, 48, who he wed back in May 2017.

He said that opening up to each other about how their day had gone while in bed helps keep the pair well connected. 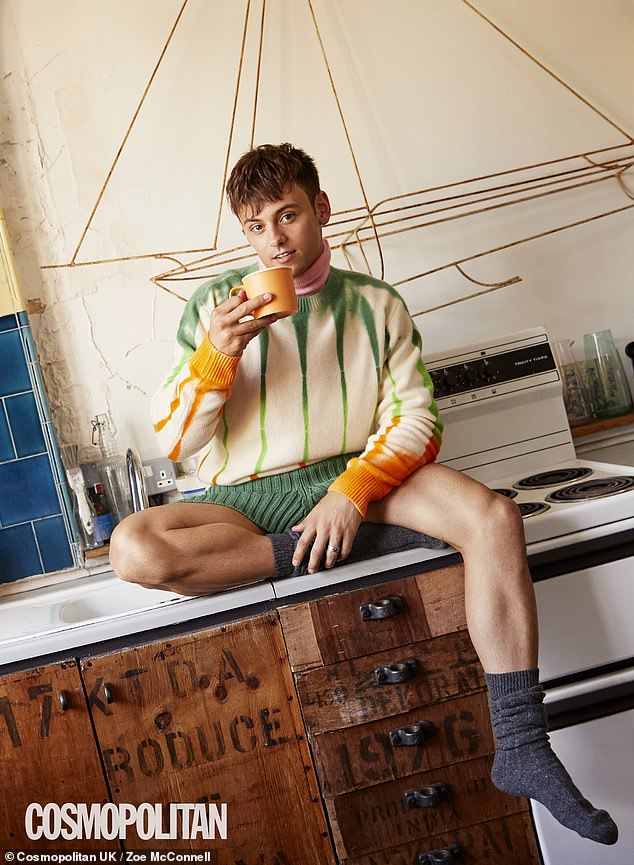 Candid: Tom Daley has revealed his best advice to keeping a happy marriage after five years with his American director husband

Speaking to the publication, he said: ‘When we get to bed, we always ask each other what our best and worst part of the day was.

‘It doesn’t necessarily have to mean I’m p***ed off about him, it could be anything, but just being able to create that conversation.’

The LGBTQ campaigner and new Cosmopolitan UK cover star also opened up about how the Tokyo Olympics being under such strict Covid rules left him in ‘disbelief’ after winning the gold medal. 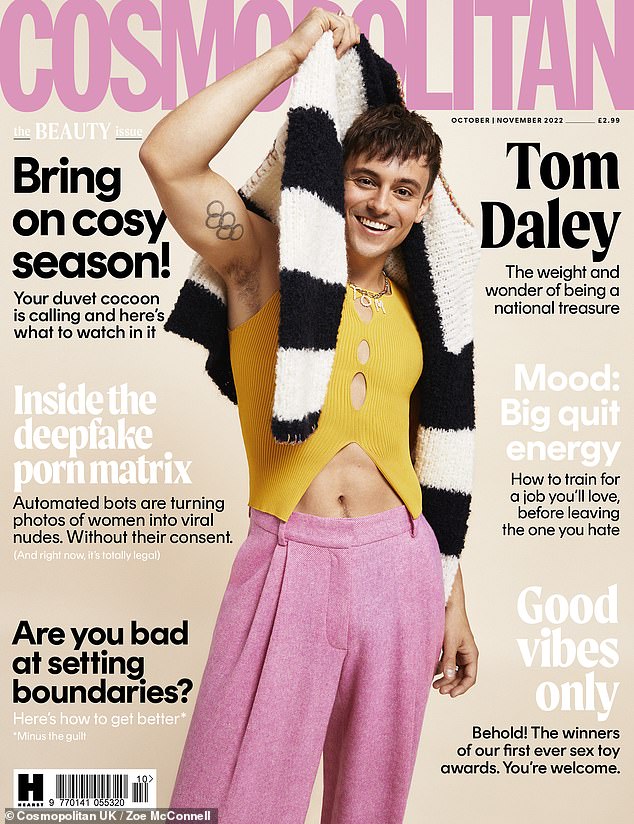 Opening: The Olympic gold medalist, 28, spoke to Cosmopolitan UK and gave insight into his relationship with Dustin Lance Black, 48, who wed back in May 2017

‘I was thinking of all of the things I had to do to get to that point, all the times my Dad had taken me to training, how I wished he was there to see it,’ he said. ‘How I wished Lance, Robbie and my Mum were there to see it.

‘It was almost disbelief, but also the first moment where I really felt a true sense of peace and contentment within myself.

‘For the longest time, I felt like a fraud.

‘I had impostor syndrome, because I’d never won. People would refer to me as an Olympic champion or whatever, but I wasn’t, and I never felt like I could correct them. So, to finally have just done it, was just really nice. ‘

And on his love for knitting, which has got him a book deal, a knitting kit line with John Lewis, and plenty of fans looking forward to his next knitted item, he has also revealed that he is hoping for his very own fashion week show.

He continued: ‘I zone out, switch off and can be completely in my own little world. Honestly, it was like my secret superpower for the Olympics…

‘One day, I’d love to have my own fashion week show. I’d like to be able to walk in and see things in stores, too. 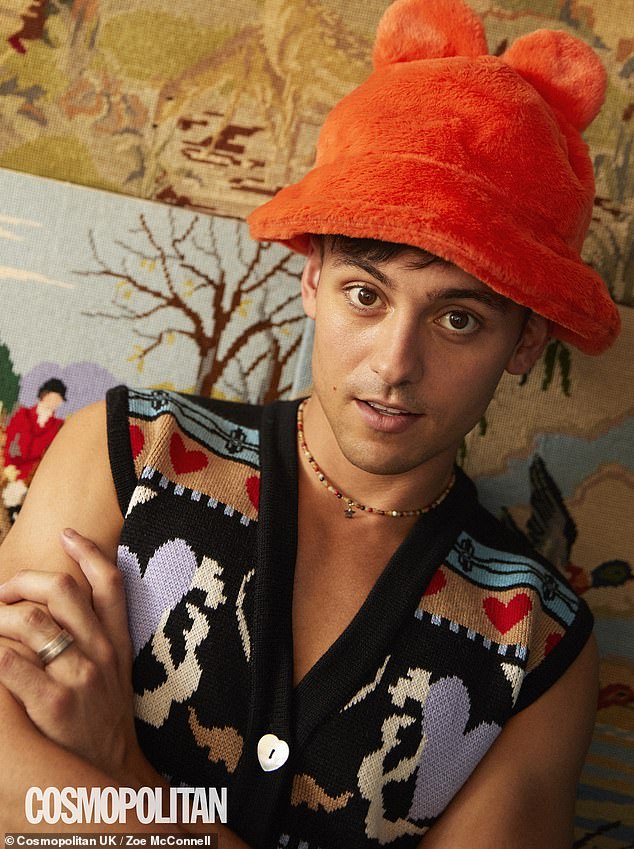 Looking forward: Tom has also revealed that he is hoping for his very own fashion week show after finding success with his passion for knitting

‘One of my favourite things is if a friend tells me they’d love to learn how to knit, I’m like, “Come over, I’ll teach you, we’ll have a couple of glasses of Prosecco and sit and knit.” That is literally heaven for me.’

He explained that he was worried about exploring his sexuality because of being in the public eye and ‘people asking questions’.

‘I didn’t know if anyone was trying to out me or be spiteful,’ he said.

‘There were many different areas that I had to be careful about. It was just a lot… But I got to the point of, “I don’t care.” I have to be me and I never want to be seen to be lying or ashamed of who I am.’

The Olympic champion has since taken a year off diving after standing on the top of the podium at the Tokyo Olympics last summer.

He said that since taking a break, he has focused on his son and husband entirely: ‘When you become a parent, you realise how much your parents did for you and how much they sacrificed.

‘Then you realise all the lessons they taught you and how you can then adapt them for your kids. I would love to have the same relationship that I had with my Dad with Robbie.’

The full Tom Daley interview can be read in the October/November issue of Cosmopolitan UK, on sale from 13th September. 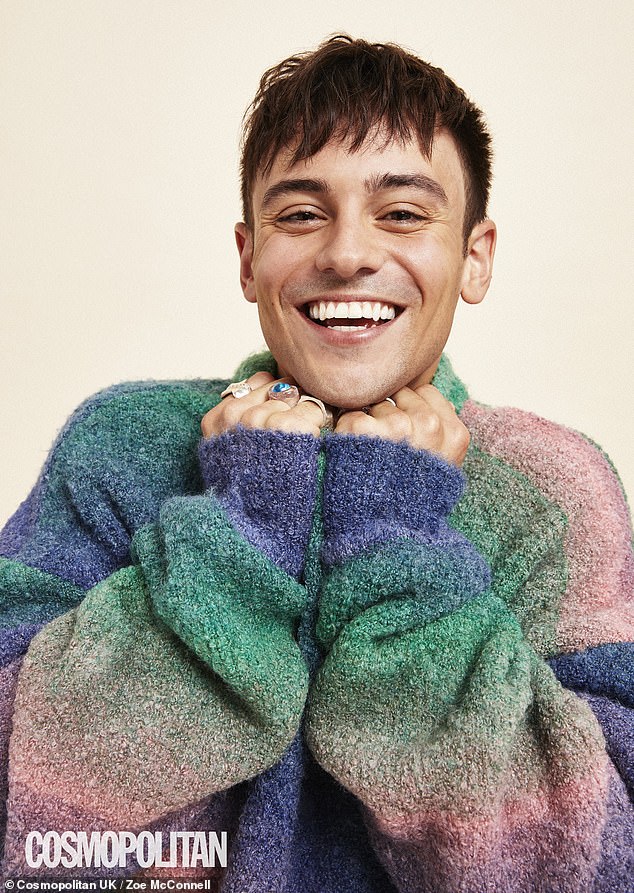 Break: The Olympic champion has taken a year off diving after standing on the top of the podium at the Tokyo Olympics last summer