After quitting as a senior royal in 2020, the Duke and Duchess of Sussex left the UK and moved to Montecito, Santa Barbara. After moving stateside, the couple took part in an interview with their A-list neighbour Oprah Winfrey.

During the sit-down with the US chat show host, Meghan Markle and Prince Harry made a series of bombshell claims about their time as members of the Royal Family.

In the interview, the couple claimed “concerns and conversations” had been raised by a member of the family about what colour Archie’s skin would be.

Following his wife’s allegation, Harry said: “That conversation, I am never going to share.”

“At the time, it was awkward, I was a bit shocked.” 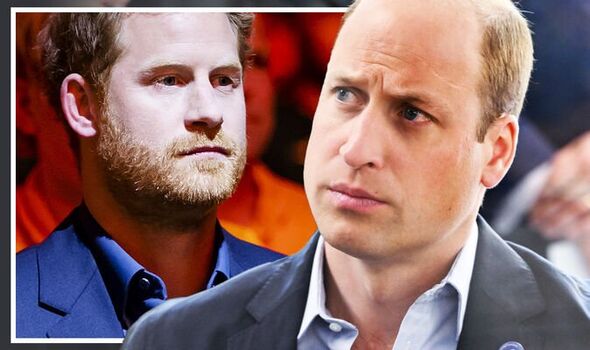 Harry also claimed his brother was “trapped” within the royal system and lifted the lid on their fraught relationship.

The Duke of Sussex said: “My father and my brother, they are trapped.

“They don’t get to leave. And I have huge compassion for that.”

The Duke of Cambridge said the Royal Family “is very much not racist” in response to a reporter’s question whilst on a school visit after the interview aired.

Royal author Robert Jobson detailed the fall-out from the interview in his upcoming book ‘William at 40: The Making of a Modern Monarch’.

Within it, he claims Harry’s comments “infuriated” his brother and that William was left “staggered” by the allegation that he was trapped.

Instead, he claims that William had told friends he “fully embraced” his royal destiny.

In an extract from the book, Mr Jobson writes: “Not surprisingly, Harry’s remarks infuriated William.

“‘We are very much not a racist family,’ he told reporters afterwards.

“He was also staggered by his brother’s claim that William and Charles were ‘trapped’ by their roles, and ‘don’t get to leave’.

“Far from feeling trapped, William told friends, he now fully embraced and understood the path laid out before him.”

The author then reported a senior royal figure as saying the Duke of Cambridge was left “furious” and that Harry’s comments were “total nonsense”.

Reporting the words of the source, Mr Jobson wrote: “He was furious. He thought it was not only bad manners, but frankly bloody rude to make those claims on his behalf, with no authority, and made worse because it was total nonsense.”

Mr Jobson then went on to claim that the interview where the Sussexes made the seismic claims “destroyed any remaining trust” William had in his brother.

He added: “As far as William was concerned, say friends, Harry had ‘totally lost the plot’”.

A statement was issued by Buckingham Palace in the aftermath of its airing last March which said the Royal Family was “saddened to learn the full extent of how challenging the last few years have been for Harry and Meghan”.

It added that “while some recollections may vary” the issues were “taken very seriously and will be addressed by the family privately”.

During the interview, Harry said that he and his brother “were on different paths”.

He said: “I love William to bits. He’s my brother. We’ve been through hell together.

“We have a shared experience, but we were on different paths.

“The relationship is space at the moment. And time heals all things, hopefully.”

Since moving to the US, the brothers have only reunited publicly on two separate occasions.

The pair were among the 30 mourners who attended the funeral of their grandfather Prince Philip last April.

Harry and William also reunited that summer to unveil a statue of their late mother Princess Diana in the Sunken Garden at Kensington Palace.

Representatives for the Duke of Sussex were contacted for comment

'None of his business!' Joe Biden warned to butt out of talks on hated Brexit deal