She became one of Australia’s most powerful and in-demand models who blazed a trail for the transgender movement in the fashion industry.

But life for Andreja Pejic looks very different these days.

The Bosnian-born model, who grew up in the outer Melbourne suburb of Broadmeadows, is all but absent from the world of high fashion she once dominated and lives a life far removed from her glamorous past.

The 31-year-old, who now calls Los Angeles home, has replaced her blonde locks with a long, dark shaggy style and is rarely seen walking red carpets or runways since stepping away from the public eye in 2019. 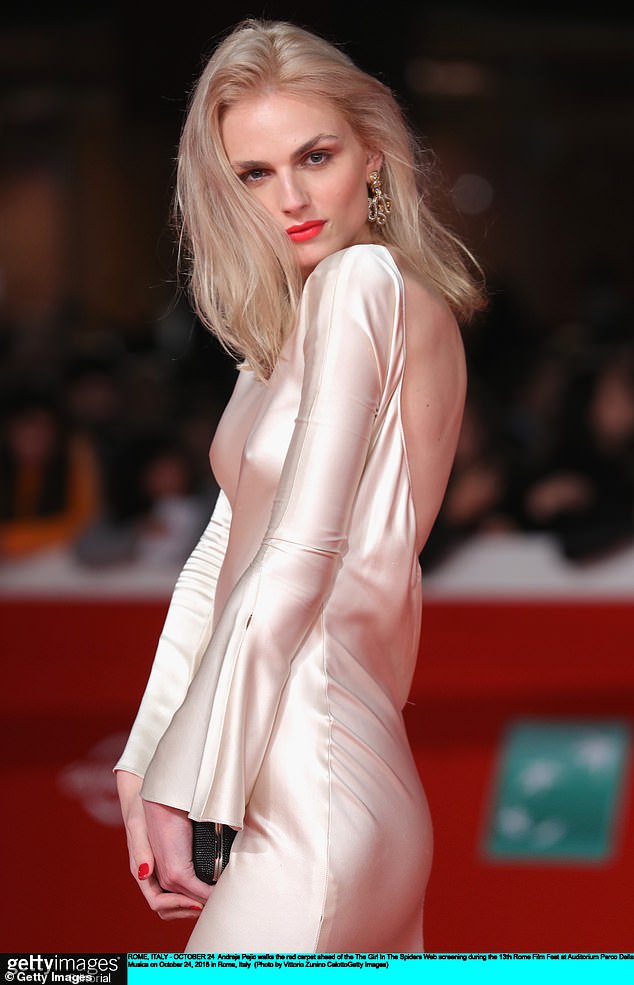 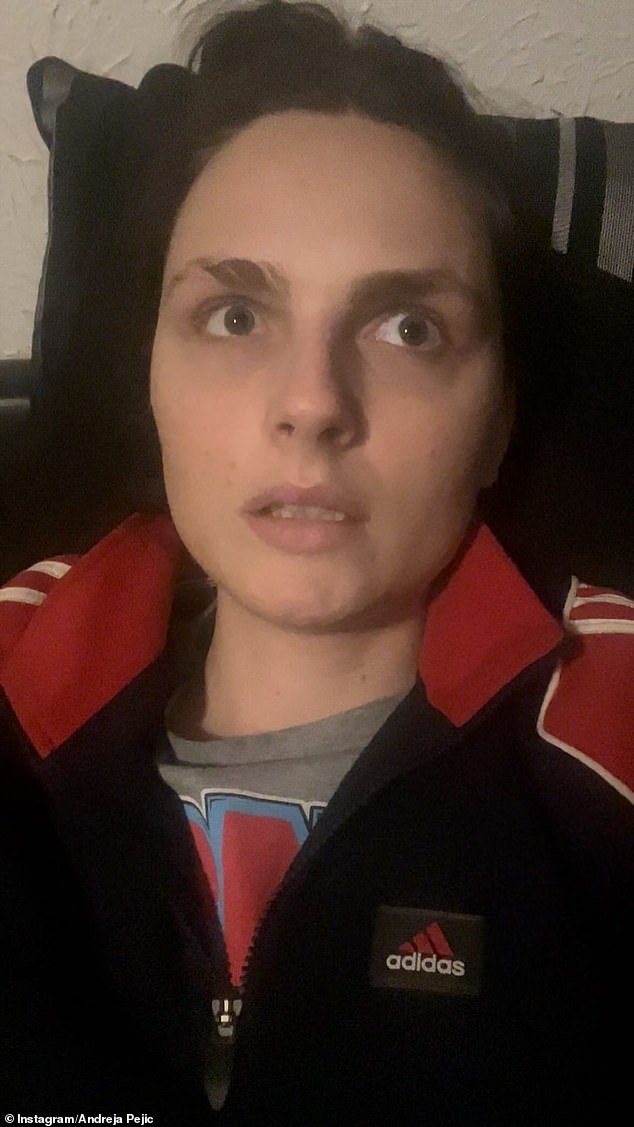 Sporting darker hair and dressed down in an Adidas tracksuit, Pejic posted these most recent images three weeks ago from her LA apartment

Instead the one-time fashion superstar, who underwent gender re-assignment surgery in 2013, is quietly hitting the audition scene and has appeared in a number of small, independent films including the 2022 thriller The Other Me and the 2021 comedy Habit opposite Bella Thorne.

The film has been received mixed reviews from critics with Variety noting Pejic’s performance as ‘(Dali’s) paramour…Amanda (Pejic) a transgender beauty with a husky knowing voice’. 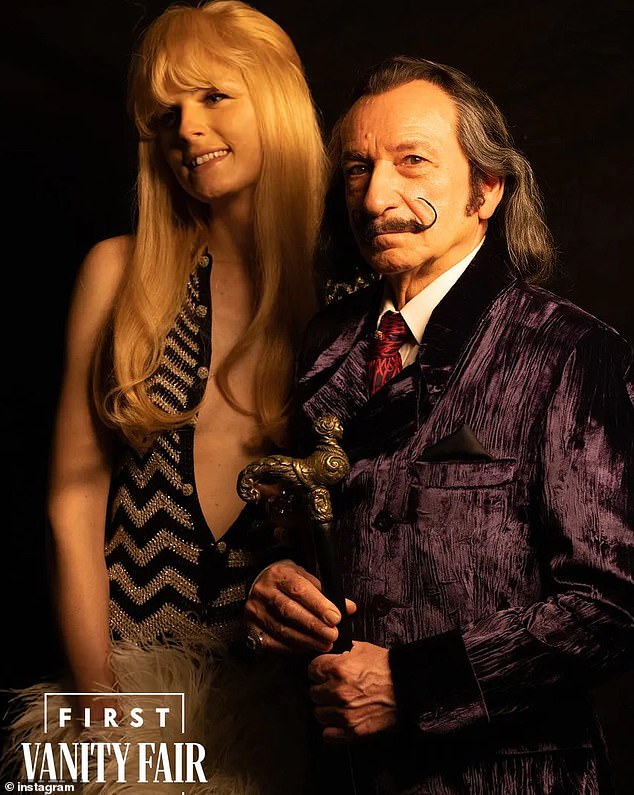 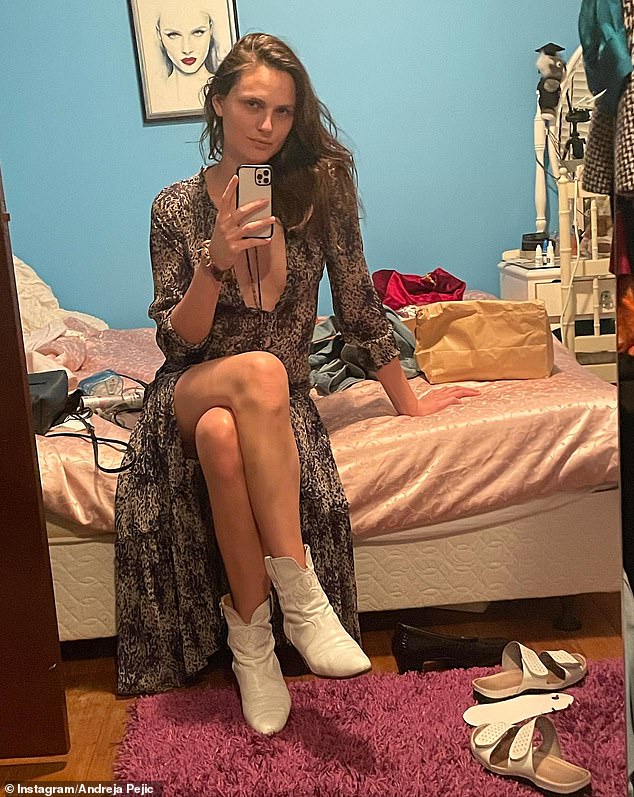 Far from the bright lights of the fashion world, Pejic appears to be living a very different life and often posts photos of her dressed-down style

The role marks Pejic’s biggest foray onto the big screen since making a shift to acting in 2019 with her film debut The Girl In The Spiders Web.

Off camera the history-making model, who became the first openly transgender model profiled by Vogue in 2015, has become increasingly vocal on a number of issues on her social media platforms.

Regularly updating fans with long and sometimes abstract monologues, Pejic talks about everything from the war in Ukraine and Covid-19 theories as well as frequent pledges of support for transgender whistleblower Chelsea Manning and Wikileaks founder Julian Assange

In one video, in which a dishevelled Pejic appears wide-eyed in heavy make up, the former model slams what she identifies as ‘the capitalist elite’ and warns of an incoming ‘revolution’.

‘There is a storm coming… and it’s not a goddess, magical spiritual wave…it not QAnon it is the storm of revolution, it is the masses in revolt,’ she says directly to the camera.

‘It will bring the capitalist elite and their upper middle class servants to their knees.

‘And they will stop looking at their stupid horoscopes and stupid stock prices and they will have a lot to answer for.’ 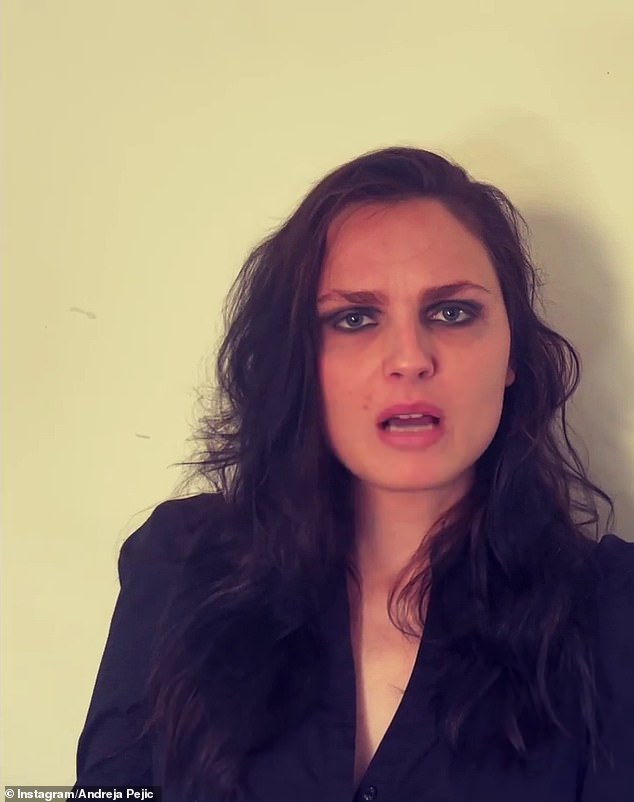 In one of the many monologues posted to her Instagram account, Pejic rails against the ‘capitalist elite’ and warns of a ‘revolution’ to come 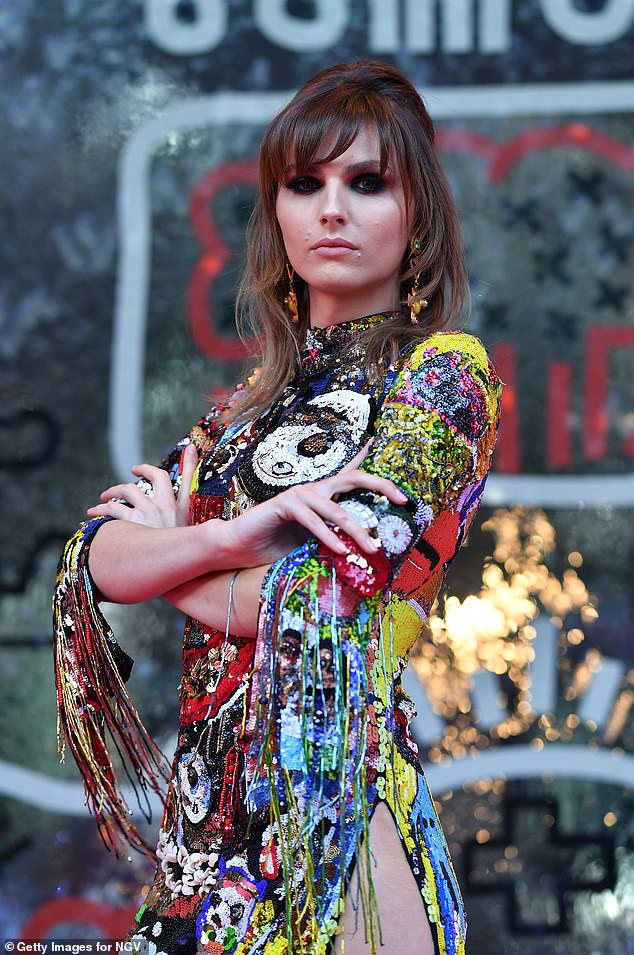 Pejic pictured here in 2019, appearing on the red carpet at a gala held at the National Gallery of Victoria

Identifying as a ‘socialist-minded artist’, Pejic gave her last interview of note back in 2019 when she spoke with the World Socialist Website (WSWS.org) and discussed at length about the Australian government’s treatment of Assange.

In a long and sometimes animated sit-down, Pejic accused the Liberal government of deliberately failing to protect Assange and described the situation as an ‘internationally organised witch-hunt’.

‘I think Labor should be putting up a real opposition to the government’s failure to protect Australia’s greatest anti-war journalist from political persecution,’ she said. 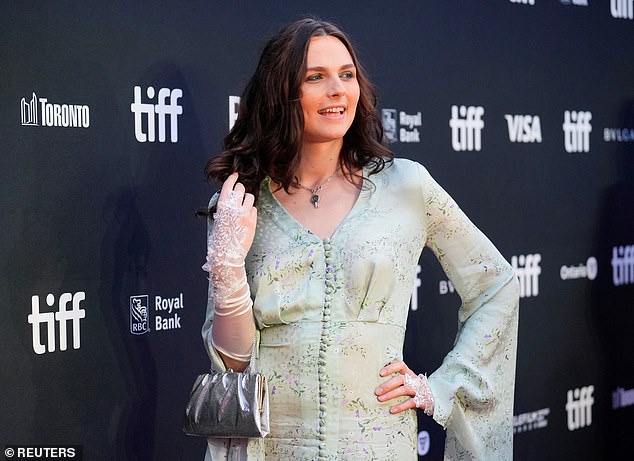 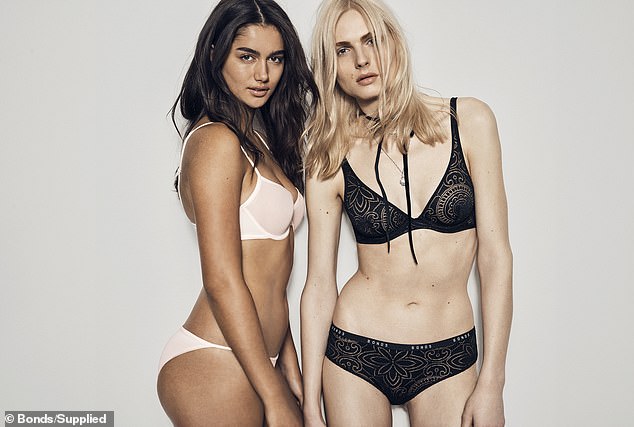 ‘It should admit its past failure and work to expose this issue to the biggest audience, so that a movement can be built to stop the extradition.’

Prior to that, Pejic’s last major appearance on the world modelling stage was on the cover of GQ Magazine in 2017 – making her the first-ever transgender model to do so.

The previous year she also became one of the first trans models to secure a cosmetics contract, inking a deal with beauty line Make Up For Ever. 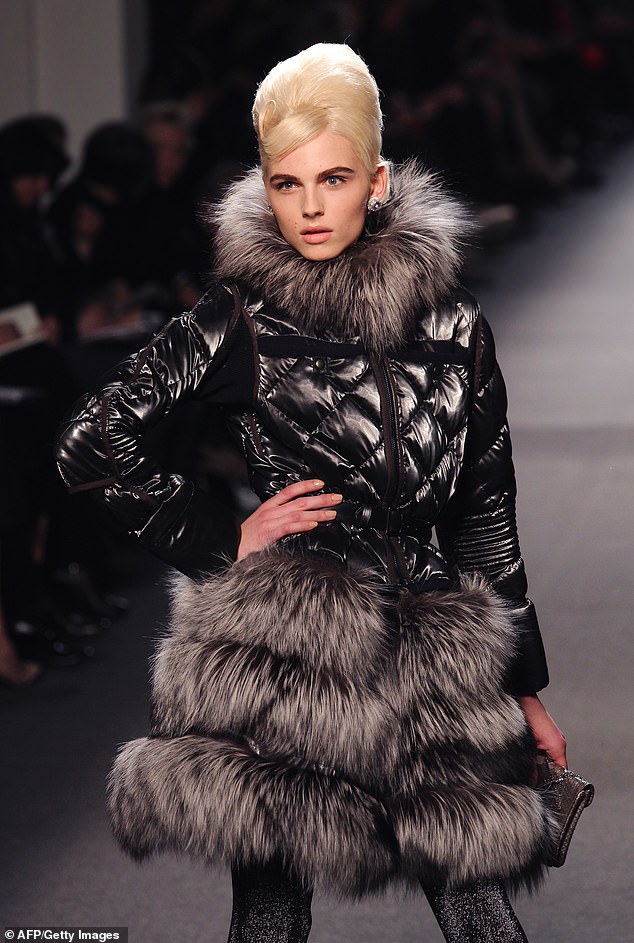 At the height of her career Pejic – who was scouted in 2009 while working at McDonalds in Melbourne – appeared on the covers of international editions of Elle, Marie Claire, Harper’s Bazaar and L’Officel.

She also once ranked at number 98 on FHM’s list of 100 Hottest Women in the world. 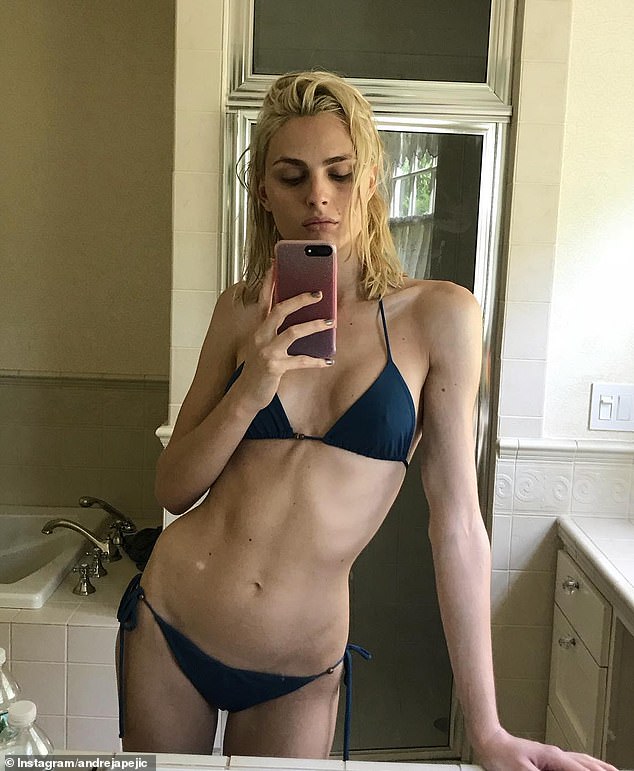 The Bosnian-born model became one of the first transgender models to secure a cosmetics contract, inking a deal with beauty line Make Up For Ever