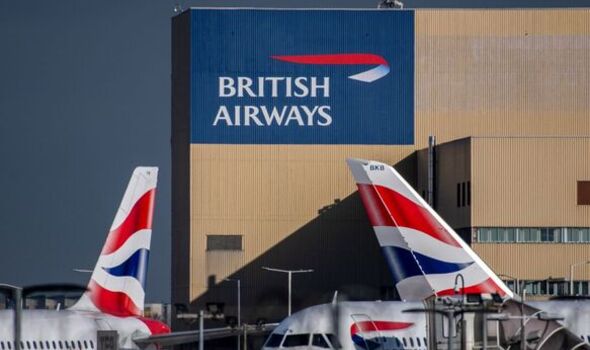 Disruption on BA flights could last until September (Image: Bloomberg/Getty)

More than 700 BA check-in staff and ground-handling agents could walk out after members of the GMB and Unite unions overwhelmingly supported a vote on industrial action because of pay.

Paul Charles, chief executive of travel consultancy The PC Agency, said: “Thousands more passengers will be on the edge of their seats fretting about whether their flight may be impacted.

“I suspect the GMB will want to sit around the table with BA management urgently and try to reach a compromise on pay before giving any firm dates.

“But there’s a mountain to climb before any deal is reached, and BA may try to stay the course, as the Prime Minister has recently advised firms, by using back-up staff to cover any strike days.” A No10 spokesman said: “This is obviously a matter for British Airways and the unions, and we would strongly encourage both to find a settlement.

“We don’t want any further disruption for passengers.

“We expect BA to put in place contingency measures to ensure that where there is disruption, passengers can be refunded.”

The unions are seeking to reverse a 10 per cent pay cut that was imposed during Covid lockdowns.

Around 13,000 jobs were also cut by BA. The airline has offered a 10 per cent one-off bonus but not a return to the same pay as before.

There are no plans for pilots to take strike action. Unions claim “bosses’ pay has returned to pre-pandemic levels”. Luis Gallego, chief executive of BA’s parent company IAG, is in line for a £4.9million payout this year.

“GMB members at Heathrow have suffered untold abuse as they deal with the travel chaos caused by staff shortages and IT failures.

“At the same time, they’ve had their pay slashed during BA’s callous fire and rehire policy. What did BA think was going to happen?”

When asked by BBC Radio 4 if people should book a flight in late July, August or early September, she replied: “Not at this stage.”

Unite officer Russ Ball said: “The problems British Airways is facing are entirely of its own making.

“It brutally cut jobs and pay during the pandemic even though the Government was paying it to save jobs.” Two weeks’ notice of industrial action must be given to an employer, meaning the earliest that a stoppage could begin is July 8. Rory Boland, editor of Which? Travel, said: “Passengers must not be made to bear the brunt of these strikes.

“Strikes by airline staff are within the airline’s control because it is negotiating with its staff.

“If your flight is delayed or cancelled because of this then you’ll likely be entitled to compensation under Denied Boarding Reg-ulations. BA must also reroute customers as soon as possible using other carriers if necessary, and explain these rights to customers.”

BA said of the strike vote: “We’re extremely disappointed with the result and that the unions have chosen to take this course of action.

“Despite losses of more than £4billion, we made an offer of a 10 per cent payment, which was accepted by the majority of other colleagues.” A Heathrow spokeswoman said: “We will support British Airways to minimise any potential disruption to passengers.”

Several professions have plans to strike next week and into July.

The Communication Workers Union will ballot Royal Mail workers in a dispute over a pay offer of two per cent. The National Edu-cation Union will ask its 460,000 members to vote if a pay rise in line with inflation is not offered.

Yesterday was the second day of needless strike action on our railways. I know an apology is not enough, but I am truly sorry for the disruption.

Before the pandemic, almost 100 million passengers used Waterloo station every year. But on Tuesday it was a wasteland. It took me back to the dark days of Covid. But this time it was avoidable.

The RMT union refuses to constructively negotiate on the future of our railways. Some of us can remember the dark days of the 1970s.

Industries such as car manufacturing and utilities were stuck in outdated and decaying ways of working.

They knew change had to happen. They adapted and made services more reliable and sustainable. But the rail industry failed to change.

Our railways are stuck in the past with outdated practices. Different teams refuse to travel in the same van, so we have to send multiple vehicles to an incident. This isn’t about us denying workers a fair pay rise, it’s because the RMT refuses to remove such practices.

These are steps that would enable us to save millions of pounds and improve the safety of everyone on the railways.