Canadian military chiefs accused China of using its warplanes to harass its patrol aircraft while they were monitoring alleged sanctions breaking by North Korea. Beijing warned Ottawa on Monday of the potential for “severe consequences” of any “risky provocation”.

Canada’s military accused Chinese planes last week of not following international safety norms on a number of occasions and of putting a Canadian crew at risk.

In a statement, the military said Chinese planes tried to divert a Canadian long-range patrol aircraft from its path and the crew had to quickly change direction to avoid a possible collision.

Mr Trudeau slammed China’s actions as “irresponsible and provocative”, adding they were “putting people at risk” while at the same time not respecting decisions by the UN to enforce sanctions on North Korea. 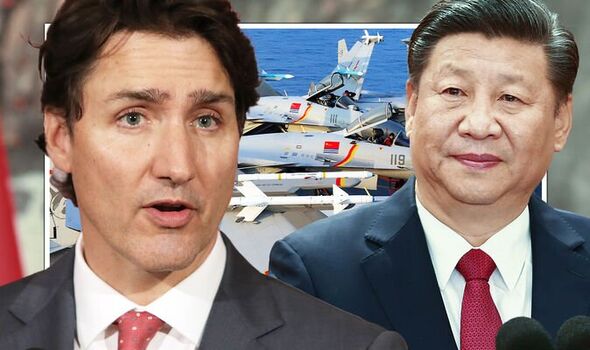 Justin Trudeau has denounced China over a clash between warplanes (Image: Getty)

Canadian daily National Post reported that Canada’s plane was deployed from April 26 to May 26, joining other countries by watching for fuel transfers between ships at sea which could be helping North Korea evade UN sanctions over its missile and nuclear tests.

It said Chinese ships are suspected of taking part in the transfers.

Chinese President Xi Jinping waves as he drives after inspecting the troops during a parade in 2019 (Image: Getty)

The ministry said in a statement that Canadian military jets have stepped up reconnaissance and “provocations” against China “under the pretext” of implementing UN Security Council resolutions, endangering China’s national security.

A rise in tensions between Ottawa and Beijing comes after Canada’s decision in May to ban the use of 5G gear from China’s Huawei Technologies Co. over national security concerns.

That decision was delayed by Canada’s detention of Huawei executive Meng Wanzhou in 2018 on behalf of the United States and Beijing’s arrest of two Canadians on spying charges.

Who is Justin Trudeau? (Image: Express)

The standoff ended when all three were released in September after US prosecutors reached a deal with Ms Meng.

The department added: “The intercept resulted in a dangerous manoeuvre which posed a safety threat to the P-8 aircraft and its crew.”

Newly elected Labour Prime Minister Anthony Albanese told reporters in Perth that his government had expressed its concerns to Beijing “through appropriate channels”.

Australian Defence Minister Richard Marles said China’s jet flew very close in front of the RAAF jet, releasing a “bundle of chaff” made up of small pieces of aluminium which were sucked into the Australian aircraft’s engine.

Canberra has in the past joined Washington in stating that Beijing’s claims around contested islands in the South China Sea do not comply with international law.

The Defence Department said that for decades it had undertaken maritime surveillance in the region and “does so in accordance with international law, exercising the right to freedom of navigation and overflight in international waters and airspace”.

Relations between Australia and China, which are major trading partners, have been strained recently over growing Chinese influence in the Pacific.

Also in May, a Chinese intelligence ship was tracked off Australia’s west coast within 50 nautical miles of a sensitive defence facility used by Australian, US and allied submarines.

China and Australia traded barbs over an incident in February in which Canberra alleged that one of its maritime patrol aircraft had detected a laser pointed at it from a People’s Liberation Army Navy vessel.