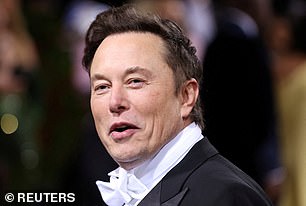 Twitter has agreed to share vast amounts of data about the content on its platform with Elon Musk after the billionaire Tesla boss threatened to walk away from his £35billion takeover of the social media website.

Musk previously challenged Twitter’s estimate that under 5 per cent of its daily active users were fake, but the company refused to give him access to the data trove so that he could verify the numbers.

However, the company appeared to have buckled last night after Musk’s lawyers said its failure to provide access constituted a ‘material breach’ of the takeover deal, according to the Washington Post.

The data includes a real-time stream of tweets, known as a ‘firehose’, which also contains details about the devices they are written from.

It has been suggested the firehose is critical to how Twitter determines the number of fake accounts on its platform.

Despite doubts about the billionaire’s intentions, Twitter reportedly told staff it is planning to hold a shareholder vote to approve the deal in early August.