Zelie Timothy appeared to be trying to patch things up with her boyfriend Tyrese Gibson following his bizarre breakup announcement earlier this month.

In a sweet post shared to Instagram on Tuesday, the influencer included a relaxing video of herself reclining on the 43-year-old singer and actor as the sat on a beach while the water lapped at their feet.

The affectionate display was augmented by a moving apology to her boyfriend in which she revealed that the two were in therapy to move past their issues, which have remained fuzzy. 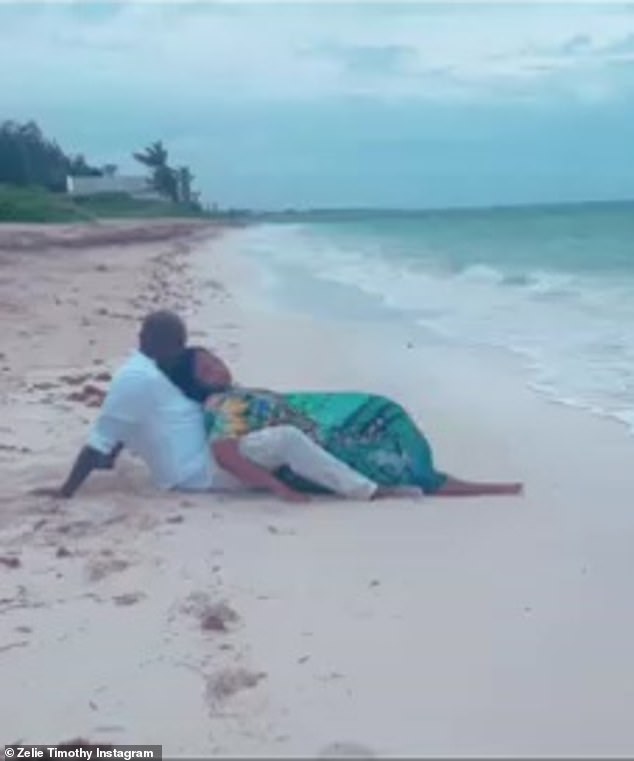 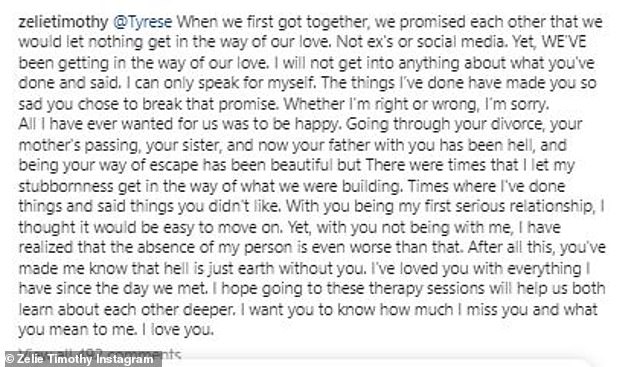 In her video, which was soundtracked with H.E.R.’s song Focus, Zelie wore a colorful patterned dress as she leaned back between Tyrese’s legs. He was dressed casually in a white shirt with khaki pants.

It wasn’t clear if the video was newly filmed, or if it was an old clip from a happier time.

‘I will not get into anything about what you’ve done and said,’ she continued. ‘I can only speak for myself. The things I’ve done have made you so sad you chose to break that promise. Whether I’m right or wrong, I’m sorry.’

She made it clear that she sympathized with whatever emotional issues the Fast & Furious franchise star was dealing with. 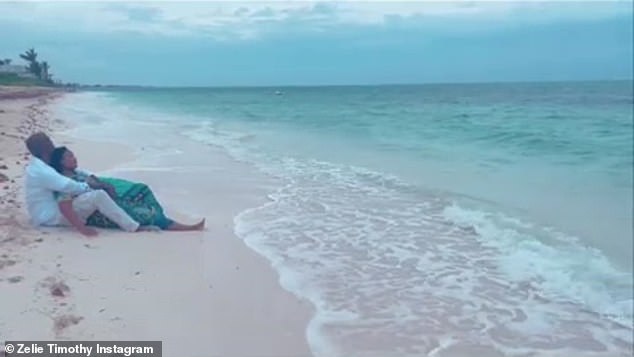 Beach date: In her video, which was soundtracked with H.E.R.’s song Focus, Zelie wore a colorful patterned dress as she leaned back between Tyrese’s legs. He was dressed casually in a white shirt with khaki pants 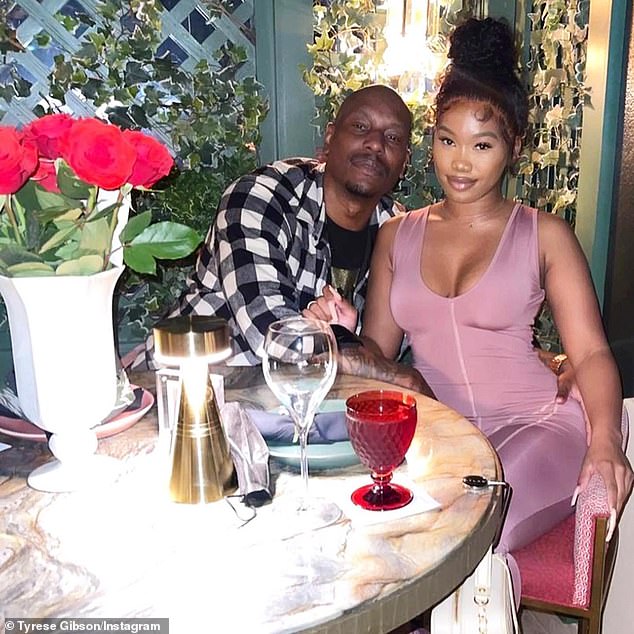 Owning it: She claimed that things she had said or done had led Tyrese to break up with her, which she apologized for. Zelie also shared that they were in therapy

‘All I have ever wanted for us was to be happy. Going through your divorce, your mother’s passing, your sister, and now your father with you has been hell, and being your way of escape has been beautiful but There were times that I let my stubbornness get in the way of what we were building,’ she wrote.

‘Times where I’ve done things and said things you didn’t like. With you being my first serious relationship, I thought it would be easy to move on. Yet, with you not being with me, I have realized that the absence of my person is even worse than that.

‘After all this, you’ve made me know that hell is just earth without you. I’ve loved you with everything I have since the day we met,’ she added. ‘I hope going to these therapy sessions will help us both learn about each other deeper. I want you to know how much I miss you and what you mean to me. I love you.’

So far, Tyrese doesn’t appear to have publicly responded to Zelie’s post. In recent days, his Instagram feed has been dedicated almost completely to reposting humorous videos from around the internet, but the R&B star has shared few personal posts. 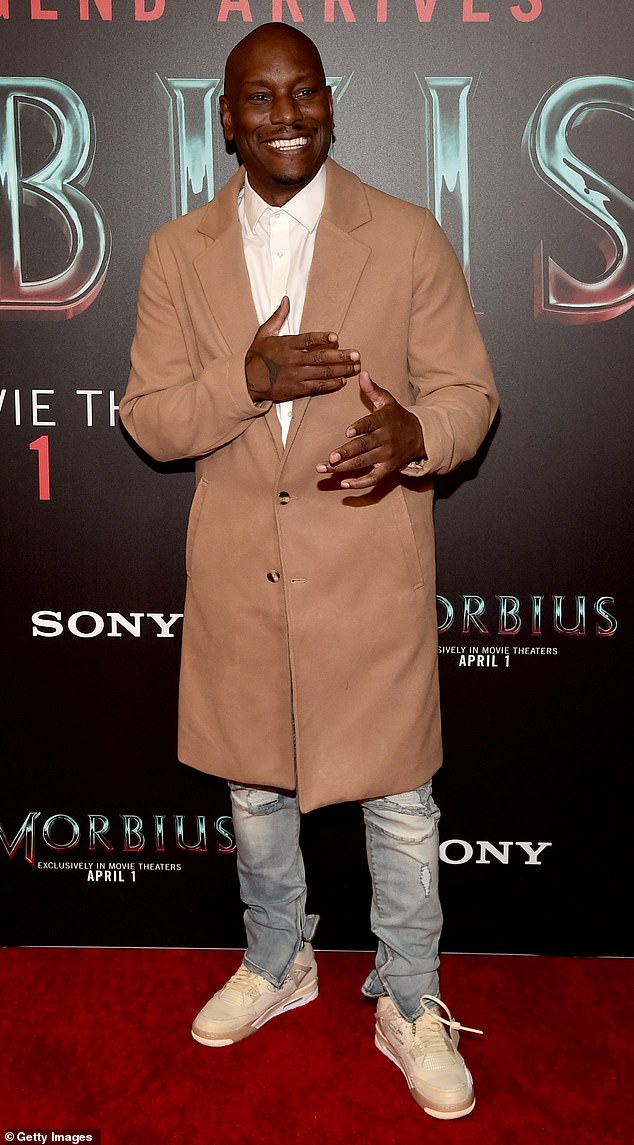 Breakup rant: Earlier this month, Tyrese took to Instagram with a series of impassioned posts following the breakup with his on–off girlfriend; seen in March in LA

Earlier this month, Tyrese took to Instagram with a series of impassioned posts following the breakup with his on–off girlfriend.

In one of his lengthy captions the Fast and Furious actor wrote: ‘I am single now and I want everyone to DM have fun with @zelietimothy.’

It started with a bizarre 16-second video of a small deer wrapped in a snake’s hold.

The musician wrote, ‘Stop trying to convince me that your daughter is not a SNAKE. I just want to be released from this strong devilish allure the sexual seduction of a masterful manipulator who knows how to [ convince everyone that she’s not mean of there to KILL YOU ].’

The strange post continued, ‘Please God RELEASE ME – RELEASE ME FROM YOUR POISON RELEASE FROM YIUR STRONG HOLD RELEASE ME I BELONG TO THE KINGDOM……. I have SO MUCH MORE WORK TO DO.’

The California-bred music artist then declared that he wants to ‘get married and settle down,’ adding that he would like to ‘really really NEST and embrace the COMFORTS of this FAMILY AND MARRIED LIFE.’ 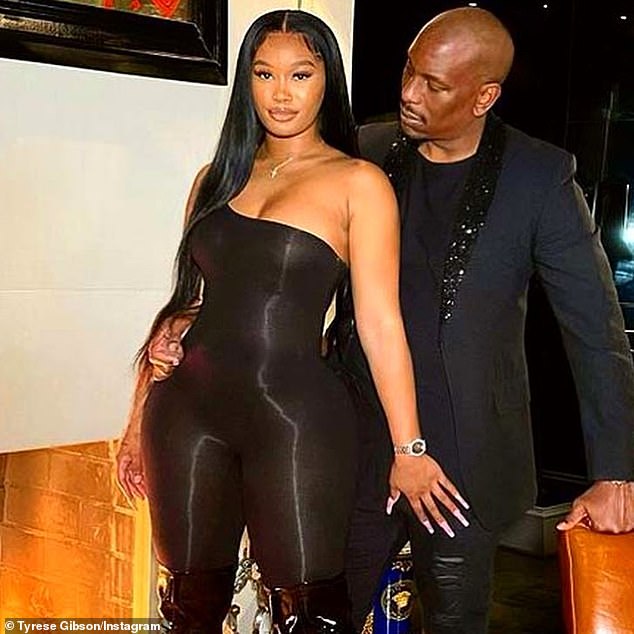 Splitsville: The musician appeared on social media with a series of posts declaring himself a single man

The once-hitmaker continued, ‘I want to stay home and be the hard working family man that I am.’

The former couple first went public with their romance in March 2021 after his divorce from Samantha Lee.

In another post uploaded on Thursday morning the crooner shared a video of Hot97 host DJ Envy.

In a scattered caption speaking to the public figure Tyrese wrote: ‘I want the mansion and the family and the wife and the 4 wheelers and the 700 acres.’

Elsewhere in the note he said, ‘I am single now and hate this sh** everyday I hate it bro I hate it.’

Message: Tyrese shared with fans that he has a desire to ‘get married and stay married for the rest of my life’ 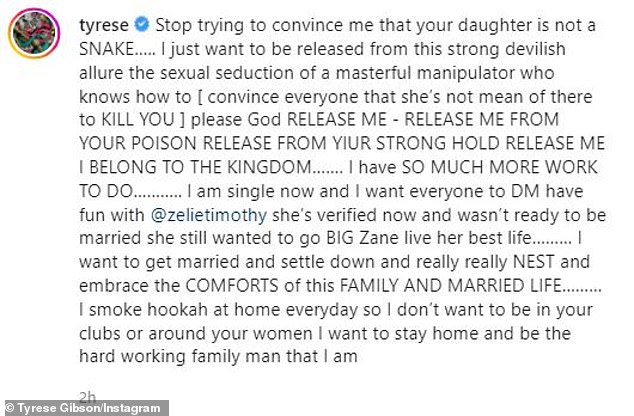 Weakness: Gibson wrote that he wants to be ‘released from this strong devilish allure,’ as he indirectly referred to Timothy

Then he added, ‘I just wanna feed you and we go to church together I’m lost out here without my wife and family……. I can’t be stable if my HOME isn’t stable…..’

Tyrese talked about the importance of ‘stability’ as he penned, ‘Stability is important I got the money I got the [ mansions ] I got whatever you need I just need to figure out how to GET married and STAY MARRIED for the rest of my life……… Who has the secret? I’m ready to listen and lean.’ 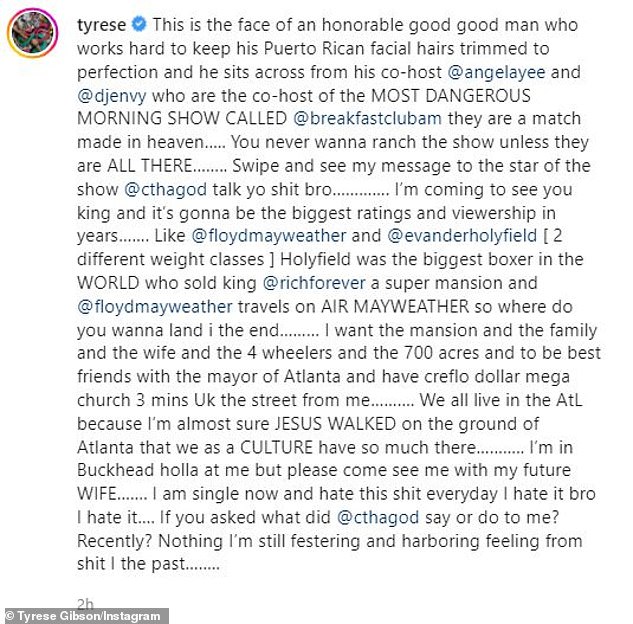 Scattered: In a rambling post the musician said ‘I am single now and hate this sh** everyday’

Amid the series of posts, Zelie also took to Instagram to indirectly address her ex’s rant.

Taking to the app’s Stories feature she wrote for her 530,000 followers to see, ‘Your acting off emotions and NOT facts!

‘Hurt people hurt people and I’m the wrong one to hurt!’

It isn’t the first time the couple has called it quits. Last September Hot97 reported that the pair had broken up.

At the time, Gibson appeared online to post, ‘We had so much potential. We really did. I wish you well, ending on a goo; endings a good thing….. [ link in the bio ] I will forever love you @zelietimothy cheers to you!!’ 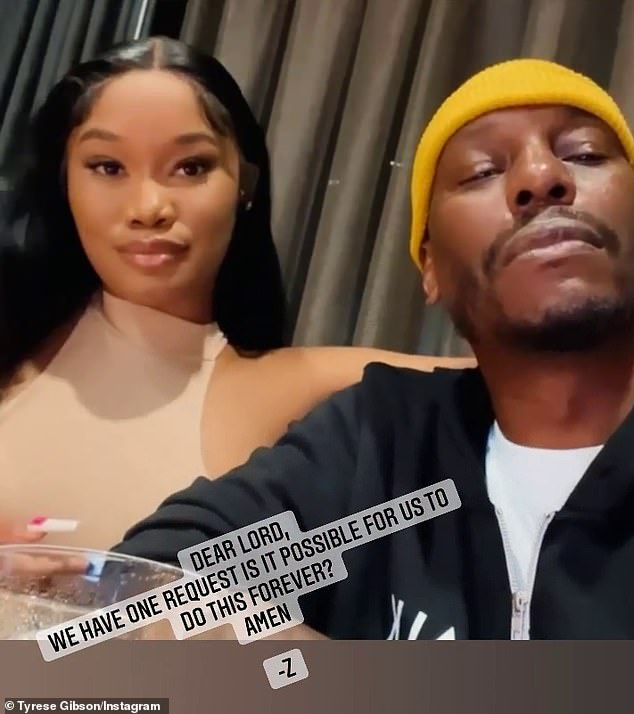 Relationship bliss: Tyrese shared his wish to ‘do this forever’ with now ex-girlfriend Zelie Timothy 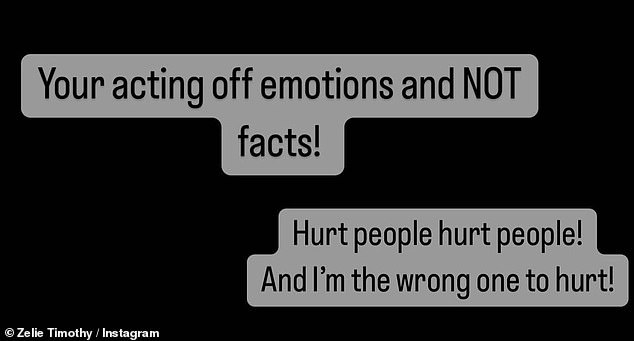 Her response: Taking to the app’s Stories feature Zelie wrote for her 530,000 followers to see, ‘Your acting off emotions and NOT facts!’