The UK is not dependent on Russian natural gas and currently relies on it for just four percent of its supply – but the decision to cut dependency will have severe economic impacts on Russia following its invasion of Ukraine as Western nations tighten sanctions to punish President Vladimir Putin and his allies.

UK Prime Minister Boris Johnson said on Monday, March 8: “In another economic blow to the Putin regime following their illegal invasion of Ukraine, the UK will move away from dependence on Russian oil throughout this year, building on our severe package of international economic sanctions.

“Working with industry, we are confident that this can be achieved over the course of the year, providing enough time for companies to adjust and ensuring consumers are protected.”

And business secretary Kwasi Kwarteng said on Twitter: “While the UK is not dependent on Russian natural gas – four percent of our supply – I am exploring options to end this altogether.”

So where exactly does the UK – well-known for its dependence on gas for energy and heat – get its supply from? 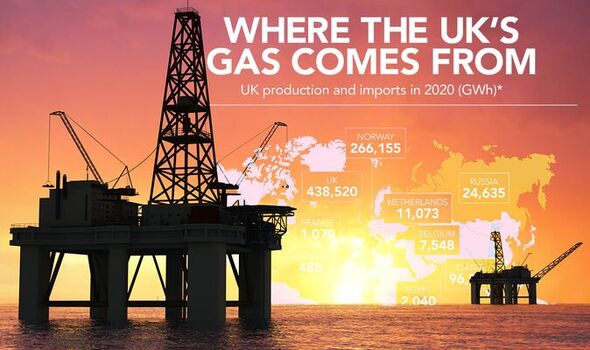 The UK has long produced its own gas from reserves in the North Sea, but this has steadily been decreasing over the past 20 years.

The National Audit Office has said the North Sea “reserves are running out, with the remaining oil and gas becoming harder to find and extract” meaning there is little economic sense in continuing to exploit such stocks.

Today, gas from the North Sea makes up 48 percent of total supplies and despite a decline since 2000, the UK remains the third-largest natural gas producing nation in Europe and within the top 20 globally, according to the Oil and Gas Authority.

More than half of gas is now imported, with around 32 percent coming from Europe through long-distance pipelines – mostly from Norway.

Norway accounts for more than half of total imports due to the UK’s proximity and shared infrastructure in the North Sea.

Where does the UK’s gas come from? (Image: EXPRESS.CO.UK)

The rest is made up from imports of liquefied natural gas (LNG) which are delivered to the UK by specially designed sea in tankers kept at -160ºC mainly from Qatar and the US.

The Russian gas that the UK receives is also supplied in LNG form.

LNG imports have diversified over the past decade thus improving the UK’s energy security.

In 2011 Qatar accounted for 98 percent of total LNG imports – but today the UK imports from nine sources, with Qatar making up just 48 percent of LNG imports to the UK followed by the US with 27 percent.

This means that the UK is “unlikely to face a physical shortage of supplies”, according to a report by the Oxford Institute of Energy Studies.

Liquefied natural gas is delivered to the UK by specially designed sea in tankers (Image: Getty)

European Commission President Ursula von der Leyen said in a statement: “We must become independent from Russian oil, coal and gas. We simply cannot rely on a supplier who explicitly threatens us.”

Energy has been a hot topic in recent months, with a spiralling cost of living crisis hitting British households before the Ukraine crisis had even begun.

DON’T MISS:
How the EU hooked itself on Putin’s gas [ANALYSIS]
Peston: Plans for drilling oil and gas in North Sea will NOT cut Russian import dependency [LATEST]
Putin humiliated: UK faces ‘no threat’ from Russia thanks to ‘secure’ Norway gas supply [INSIGHT]

The UK Government has maintained the country’s energy bill crisis is a result of high prices globally and not due to security of supply.

A spokesperson said: “Thanks to our diverse mix of nuclear, natural gas and renewable technologies, the UK has one of the most reliable energy systems in the world.”

However, as one of Europe’s biggest natural gas users with 85 percent of homes using gas central heating, authorities have said the UK’s supply should not be taken for granted.

The cost of gas for energy supplies has risen by a staggering 250 percent since the start of 2021, according to data from industry group Oil & Gas UK.

Mr Brearley said: “We know this rise will be extremely worrying for many people, especially those who are struggling to make ends meet, and Ofgem will ensure energy companies support their customers in any way they can.

“The energy market has faced a huge challenge due to the unprecedented increase in global gas prices, a once in a 30-year event, and Ofgem’s role as energy regulator is to ensure that, under the price cap, energy companies can only charge a fair price based on the true cost of supplying electricity and gas.

“Ofgem is working to stabilise the market and over the longer term to diversify our sources of energy which will help protect customers from similar price shocks in the future.”