BBC Weather: Thundery spells to dominate ahead of heatwave

After a sweltering Saturday for much of England, the warmth – if not sunshine – has stayed in the air for many parts of the UK. But after intense downpours on Sunday, May 15, sparking flood warnings in some regions, sunny spells are on the cards, although the possibility of thunder continues to lurk.

Jim Dale, senior meteorologist at British Weather Services, told Express.co.uk that the theme of the coming week will be “warm” and “humid” weather, with an “ongoing threat of scattered thundery showers”.

This applies especially across England, he added.

Tuesday will bring the warmest temperatures of the week, with East Anglia likely to see 27C, and temperatures generally warm across the board.

Sky News forecaster, Jo Wheeler, predicted that “eastern parts of the country should have a lovely day with sunshine and a high of 27C”. 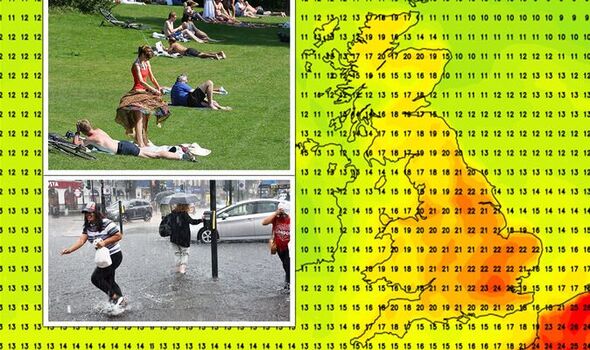 Tuesday will bring the warmest temperatures of the week, with East Anglia likely to see 27C (Image: Getty/ Netweather)

Temperatures were high for many on Saturday, with humid air continuing through the week (Image: PA)

By mid-afternoon on Tuesday, temperatures will soar to a summery 24C in the southeast of England, staying warm throughout the afternoon.

The Met Office predicts that by mid-to-late afternoon, temperatures in the capital could even reach 25C by 4pm, even as cloud cover lingers.

Across much of the rest of England, temperatures will stay above 20C for the afternoon, with temperatures taking a slight hit across Wales and southwest England.

Conditions stay pleasant throughout Scotland, reaching 19C in some areas but dipping to between 12 and 13C in others as the day wears on.

Jim Dale told Express.co.uk that there was an ‘ongoing threat of scattered thundery showers’ (Image: PA)

The east of England will see the highest temperatures (Image: PA)

On Monday afternoon, temperatures will peak in the capital, with much of the country feeling the warmth of a pleasant 19 to 22C.

Across the southeast, many will enjoy 19 and 20C, this figure dipping slightly for those in the southwest down to Cornwall.

Throughout Somerset, Devon down to the tip of the southwest coast, temperatures of 17 and 18C will be more likely.

But the warm temperatures will likely come with a “muggy feel to the day”, according to Ms Wheeler.

Heading north, the warmth lingers for many areas of the Midlands, starting to tail off above Manchester and towards Newcastle.

Scotland will see single-digit temperatures mid-afternoon, as low as 6C in the mountainous regions and 9C on the coastlines in the east.

Northern Ireland will see broadly similar temperatures to swathes of west and south Wales, hovering at 16 or 17C.

The morning of May 18 will start cooler than Tuesday, temperatures firmly staying in the mid-to-high teens at around 9am.

Across the east of England and in London, temperatures will break the 20C barrier, but will not reach much higher than 21C throughout the afternoon.

The mid-afternoon will once again boast the warmest temperatures, but not exceeding 23C, the Met Office predicts, with Thursday expected to be similar.

Friday dawns cooler, but quickly returns to similar temperatures by mid-morning, the warmest of the weather concentrated on London.

Mr Dale added the weather is likely to stay “mixed” with “on and off” thunderstorm threats continuing for the rest of the month.