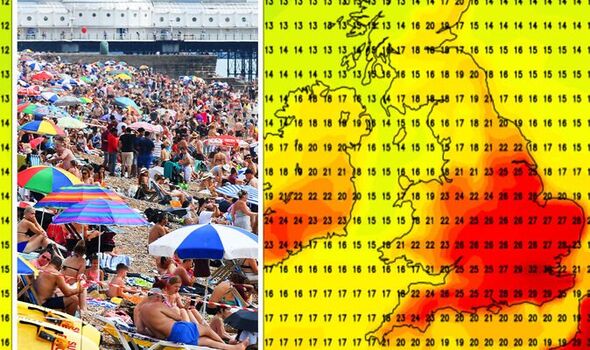 It will bubble towards Britain sparking a the first heatwave of the season prompting forecasters to declare ‘a taste of summer is on the way’.

Netweather forecaster Jo Farrow said: “There are signs the warmth could last from Wednesday through until Saturday, if the push of fresher air from a low to the north takes its time to shove the warmth plume away from the UK eastwards.

“The heat is already showing itself in southern Spain from North Africa. That will build through Spain from Sunday until Wednesday. Then a strong signal for higher UK  temperatures for the second half of next week.

“A taste of summer on the way.”

Exacta Weather’s James Madden said: “Over the next few days high pressure will nudge across the country pushing temperatures into the mid-20Cs or even higher than this  at times.”

Weather models reveal flames of heat smouldering over the Continent licking the UK towards mid-week.

Temperatures in some southern regions could push a stifling 32C while thermometers hit the high-20Cs widely.

Elsewhere the mercury will hover between 15C and 21C, with only the far northern fringes dipping below.

Mr Madden said: “The heat will be confined largely to southern England while further north there will be more in the way of cooler conditions.

“Nevertheless, the sun is likely to burn through at times brining this burst of summer to these parts too.”

The blistering blast of air will surge up from the Continent which is braced  for temperatures later next week to hit record levels.

Britain will start to heat up after the weekend with the peak of the scorcher expected between mid-week and next weekend.

Volatile atmospheric conditions will trigger outbreaks of rain and thunder, according to the Met Office.

Met Office meteorologist Aidan McGivern said: “Heat is building across Spain and that heat pushes into France and the northern edge of that starts to influence the next of next week.

“As well as that there is some instability on the northern edge of that week so there is the potential for some thunderstorms to move up from the Continent.”

It will follow a ‘blustery’ and cooler weekend with an Atlantic low-pressure system poised to give the weather a shake.

Scotland faces gales which will bring down temperatures while exposed regions widely could be windy.

After some chilly nights, temperatures in parts will hit the high-teens or the low-20Cs, Mr McGivern added.

He said: “It will be a blustery weekend because of a deep area of low pressure turning up quite close to the northwest of Scotland, and that is where the strongest of the winds and most frequent showers will be this weekend.

“Winds will be strong to gale-force around exposed parts of northwest Scotland and that is going to make it feel cool but out of the wind and further south there is the potential for high-teens, low-20Cs.”

Hot weather is in part because of the remains of ex-Tropical Storm Alex emptying warm, humid air into Britain.

The storm which struck Florida before hitting Bermuda then U-turned in the Atlantic and made a beeline for Britain.

Its sultry influence prompted bookies to slash the odds on summer heat with Ladbrokes offering 1-2 from 2-1 on this weekend bringing the hottest day of the year.

Spokesman Alex Apati said: “At long last it looks like Brits can strap in for some record-breaking high temperatures for the year.”

Coral is offering 4-5 for this summer to be the hottest since records began with evens on 2022 beating the UK record of 38.7C.

Spokesman John Jill said: “The UK should be sizzling in the sun next week, and with temperatures set to continue to rise, we have slashed the odds on this month ending as a record hot June.

“The odds are even shorter on this summer being the hottest ever in the UK, while we could also see the highest ever UK temperature of 38.7C being broken.”

Temperatures over Spain and North Africa will be rocketed by a high-pressure ‘anticyclone’ pushing temperatures to 40C, Jo Farrow added.

She said: “The Spanish [meteorological] service has just issued heatwave warnings “Ola de Calor” due to a stable anticyclone, strong sunshine and heat from North Africa.

“Majorca could see in the mid 30Cs and local hotspots inland Andalucia could see over 40C.”