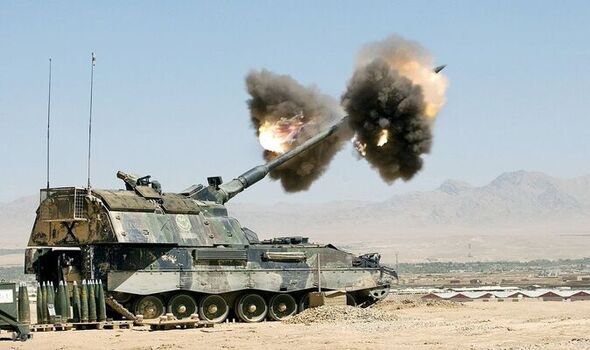 Sources last night confirmed that 45,000 British-made high explosive shells will be sent along with the AS90 self-propelled Howitzers to Poland this week, where Ukrainian forces will be taught to use and maintain them before they are deployed to the front. It comes as all three of Britain’s regular tank regiments and its reserve regiment find themselves deployed on Nato’s flanks in a robust show of force against Russia.

“This will become an artillery conflict, they need support with more artillery, that is what we will be giving them,” he said.

President Zelensky said he was “grateful” for the military aid, adding:”We want more than we’re being given, but we’re satisfied. We cannot refuse or reject anything during the war from the biggest military aid, which is coming from the United States and the United Kingdom.

“There are many other friends in Europe, but I’m talking about volumes of help and I’m grateful for it.”

Despite what most experts have termed a militarily clumsy campaign following the new invasion of Ukraine two months ago, Russian forces have now begun to fight more efficiently, said western officials.

“Russian command and control is more effective, we’re seeing a smarter use of UAVs and a greater integration of electronic warfare,” said one Nato source.

This applied to its use of artillery, also.

This is significant because Russia’s aim is to slowly encircle 30,000 Ukrainian troops.

“If Russia concentrates enough force to surround a significant portion of Ukraine’s best forces, it could make territorial gains which would be difficult to dislodge,“ warned the source.

Britain’s AS90 tracked Howitzers – which have a range of 15 miles – are highly manoeuvrable and can fire three shells in less than 10 seconds. Their armour is strong enough to protect their crew of five from armour piercing rounds.

Ukraine is also receiving 72 towed Howitzers from the US and 144,000 shells – enough for three weeks of intensive operations – as part of a wide-ranging £620m defence package which includes target acquisition drones.

Speaking last night Gen Sir Richard Barrons, former Joint Forces commander, said: “Ukrainian forces have been successful with short range ambushes, but they will need to change the way they fight. Donbas is open country and the Russians are more alert.

“That means destroying Russian armour from beyond the line of sight, which requires artillery and target acquisition drones.

“Artillery has already been by far the biggest killer in this war, and this will only increase now.”

He added: “I once commanded an AS90 regiment. They are easy to fire but they are complex machines to maintain. We need to ensure that we train Ukrainians well and deliver enough ammunition.”

Two squadrons of Challenger 2 tanks belonging to the King’s Royal Hussars have begun to assemble in Poland from Sennelager, Germany, for scheduled month-long wargames.

They may be forced to remain there for years, however, to allow Poland to send its Soviet-era T-72 tanks to Ukraine and await new US replacements, which are scheduled to be delivered in 2025.

In the meantime, Britain is flexing its military muscle along Europe’s northern and southern flanks, too.

A further squadron of 14 tanks, operated by the Queen’s Royal Hussars, was in Finland for the first time last night for wargames designed as a show of Nato unity with the Nordic country.

On Friday, Finland’s parliament voted overwhelmingly to proceed with plans to join the defence alliance.

In Estonia, one tank squadron from the Royal Tank Regiment has been augmented by infantry from the Royal Welsh battlegroup for wargames with Danish and Italian forces, while the RAF increases air patrols on the Romania border.

A senior source said Britain would soon have 6,000 troops on so-called “show of force” deployments above the UK’s normal commitments to Nato.

Justin Crump, ceo of the strategic risk group Sibylline, said: “The deployment of QRH to Finland, the KRH to Poland, and the existing tank commitment to Estonia – currently doubled to two battlegroups – means parts of all three of the regular tank regiments and the one Reserve regiment, the Royal Wessex Yeomanry, are now on the eastern front of Nato.”