BBC weather: Very strong winds and storms on the way

New maps from Netweather show there is a 90 percent risk of snow in an area of northern England, with a 55-70 percent risk factor heading southwards towards the Midlands and Wales. The latest charts from WXCHARTS show snow hitting the UK on Thursday, with the freezing air drifting southwards into northern England by the evening. By midday on Saturday midday, 4cm of snow is forecast for an area located in the far north of the country above Manchester.

This will continue until the early hours of next Monday, with blankets of snow forecast for north east and north west England.

AccuWeather Senior Meteorologist and Lead European Forecaster Tyler Roys warned two areas of strong high pressure are set to crash into each other to form a “storm track” between Iceland and western Europe.

As these storms squeeze their way this “narrow gap”, they quickly “intensify” and help pull the freezing air southwards.

Mr Roys also warned there will be two periods where the UK will be hit by snow, the first of which will hit on Thursday, with temperatures plunging to as low as -11C at the weekend. 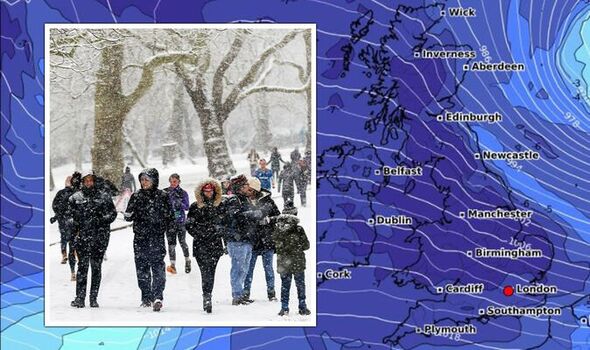 UK snow forecast: A deep freeze is set to hit the country this week (Image: GETTY/WXCHARTS)

UK snow forecast: There is a high risk of snow for much of the country at the end of this week (Image: NETWEATHER)

He told Express.co.uk: “There is going to be two periods that parts of the United Kingdom could see snow this upcoming weekend.

“For Northern Ireland, southern Scotland and northern England this will be a case of snow changing over to rain.

“For these locations, it looks like 1-3 inches (3-8cm) of snow could potentially accumulate.

READ MORE: Storm Eunice map: Exact areas to be hit by second storm of the week

“For the rest of Scotland there is growing confidence of a widespread snowfall. This includes the valleys around the Scottish Highlands.

“While the Scottish Highlands could see at least a foot of snow (12 inches/30 cm), the valleys could see upwards of 6 inches.”

He added: “The second threat is likely to occur on Friday night, following the passage of the major storm mentioned above.

“A quick moving storm will move in from the west and encounter some colder air in place, so locations across Northern Ireland, Wales, northern England and Scotland could see a six hour period of snow that could total up to a couple of inches (5cm).

“The best locations that could see accumulations from this second threat will be in the higher elevations.”

The latest weather maps from WXCHARTS show snow rapidly making its way towards the UK, with 20cm set to fall in a region of Scotland on midday on Thursday.

Heavy snow will fall over the following 24 hours north of the border, with one chart showing 39cm is set to smother Central Scotland on Friday around 3pm.

This will only liken worsen heading into the evening, with as much as 40cm of snow set to hit north east Scotland by 9pm as the freezing air drifts south into northern England.

By midday on Saturday, central Scotland is forecast to be covered in a huge 42cm of snow.

The heavy snow will continue right through until midnight on Monday, with a massive 41cm forecast to fall in north east Scotland.

This will trigger bitterly cold temperatures, with the latest maps from Netweather showing the mercury could plunge to a bone-chilling -12C in central Scotland on Saturday morning.

A huge chunk of the country will wake up to below freezing temperatures, with England just keeping itself in positive single figures.

This deep freeze will return again overnight on Sunday, with minimum temperatures set to plummet to as low as -9C in Central Scotland, with -3C in northern England.

Met Office senior meteorologist said: “Minimum temperatures are going to be the coldest Friday night/Saturday morning across the United Kingdom.

UK snow forecast: Temperatures could plunge to as low as -12C (Image: NETWEATHER)

“Temperatures will range from the teens F (-11C) in the Scottish Highlands to around freezing in northern England and Northern Ireland to 2-4C across Wales, Midlands and southern England.”

Looking ahead to the forecast on Friday, Met Office meteorologist Becky Mitchell added: “Cold with sunny spells and showers in Scotland.

“Showers could fall as snow over the hills.

“Across Northern Ireland, England and Wales, an area of cloud and rain will arrive, possibly with snow on the northern edge.

“This low pressure system could also bring some very strong winds too.”

Vitamin B12 deficiency signs: Four 'neurological symptoms' – are you at risk?