UK storm forecast: Mercury to plunge by 14C as lightning and 'cold front' strikes in HOURS

The heatwave threshold in the UK varies on location, but in London it is met when the mercury reads over 28C for at least three days. In the south east and Home Counties, the threshold is 27C, while most of the country sees a heatwave declared when the temperature reaches over 25C. While Friday is set to see heights up to 34C, Saturday sees a still warm but substantial drop in temperatures.

The Met Office forecasts that by 4pm on Friday, much of London will bake in 31C heat, while the home counties cook in 29C to 30C.

Areas as far north as Lincoln, as well as Essex and Norwich, will also see the mercury hit heights of 31C, while the hottest temperatures at this time will be seen in Cambridge and Peterborough with 32C.

But according to WXCharts, by 3pm on Saturday, the maximum temperature will read 24C in Surrey and Sussex, below the heatwave threshold and a drop of 6C.

London sees a drop of 5C, taking it at 3pm to a much more manageable 26C.

North of London, the heat drops drastically, with 3pm seeing temperatures in Essex and Norwich range between 22C and 17C, dropping by 9C to a staggering 14C. 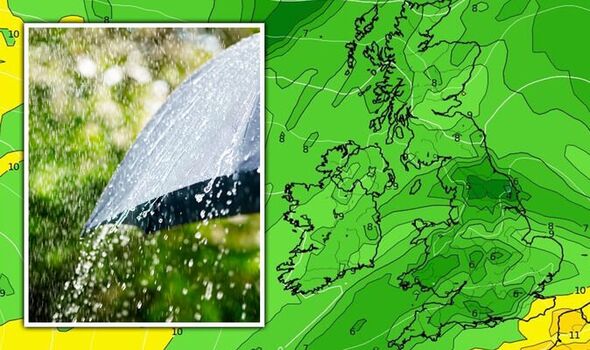 The heatwave is set to end on Saturday with temperatures to fall by up to 14C (Image: WXCHARTS / GETTY)

Storms are also expected to strike on Wednesday due to colliding pressure systems (Image: NETWEATHER)

Temperatures are then set to chill again on Sunday, with midday seeing London and the south east remain the hottest parts of the country but with much more seasonable weather,

At this time, the maximum temperature in London will be 18C, while 16C to 17C will be seen across much of the country.

Things begin to heat up again on Monday, while still remaining below the heatwave threshold.

In addition, maps from Netweather show a risk across the UK for storms from Tuesday.

Wednesday sees most of Britain at risk of thunder storms with small showers, as the hotter air from Europe collides with cold pressure from the North Sea.

Norwich sees the biggest drop with a fall of 14C from 31C to 17C on Saturday (Image: WXCHARTS)

The maximum temperature in London will be 18C on Sunday, a fall of 13C from Friday (Image: WXCHARTS)

In its weekend forecast, the Met Office echoed that cooler temperatures are set to return by tomorrow.

They said: “A cold front from the north introduces more uncertainty on how long the highest temperatures will hang on for Saturday, with areas to the southeast currently most likely to hold on to warmth the longest, although the extent of this is still being determined.”

For their outlook from Sunday to Tuesday, the agency added: “Rain in the far south Sunday, heavy in places.

“Showers in the north, sunny spells elsewhere. Many southern areas dry Monday and Tuesday, but with rain spreading to the northwest.”

Ukraine LIVE: Do it! Lavrov goads UK to ‘force Russia to knees’

Wednesday sees most of Britain at risk of thunder storms with small showers (Image: NETWEATHER)

The Met Office said “the best of the sunshine is expected” towards the end of the month.

In their outlook from June 21 to June 30, they said: “Throughout much of this period, most areas could experience dry conditions with occasional bright spells and some sunshine.

“There is a risk of showers, thundery at times, in the south, where it is more likely to be cloudier than elsewhere, however these areas are still expected to receive some sunny spells.

“The north also has a risk of longer spells of rain at times, which may spread to most areas through the middle of the period.

“Temperatures around normal, perhaps slightly warmer further south and cooler in the north with the chance of some stronger winds here.

“Towards the end of June the best of the sunshine is expected in the south and east, bringing slightly warmer temperatures with it, while the north and west may see more unsettled spells.”

Jo Farrow noted a ‘divide across the UK’ with rain up north on Friday (Image: WXCHARTS)

Jo Farrow, Netweather.tv forecaster, said that Friday, while seeing the hottest temperatures of the year in the south has “a divide across the UK”.

She noted “a weather front bringing cloud and rain and introducing fresher conditions from the northwest” will feature at midday.

Ms Farrow added: “There are also moderate to fresh west to southwest winds affecting some parts which should break up the cloud to the lee of high ground and allow warm sunshine.

“Behind the front, conditions will improve with breaks in the cloud and temperatures moving into the low 20sC for eastern Scotland. Possibly for Co. Down and Co. Antrim too.

“This rain band should weaken as it moves over more of Northern Ireland. It moves from the Central Belt to southern Scotland at lunchtime and then into Cumbria this afternoon. Eastern Scotland is always more sheltered from the rain.

“To the south of this, there is the breeze off the sea for western Wales and NW English coasts of the Irish Sea. Also, around the Bristol Channel and Cornish coasts with low cloud creeping in.”

Statins: The growths on your fingers that could signal potentially fatal rhabdomyolysis