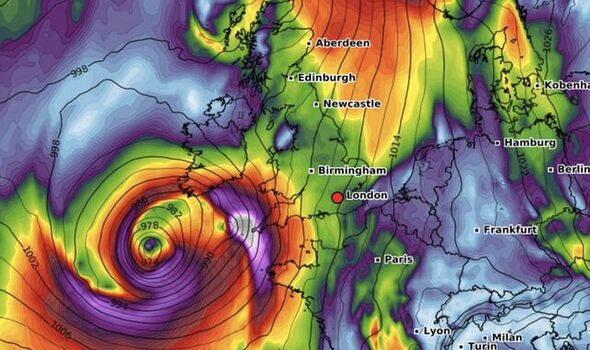 The calm spell is about to come crashing to a wet and windy end amid government warnings for 48 hours of damaging gales and coastal flooding.

Powerful gusts touching 70mph forecast from this afternoon could bring road and bridge closures, traffic disruption and damage to trees and buildings.

The storm will deepen as it sweeps across Britain through tonight and tomorrow, according to the Met Office.

Meteorologist Aidan McGivern said: “This low-pressure system starts off as an innocuous feature in the Atlantic and gets picked up by an active jet stream.

“Winds of 150mph high in the sky will help to spin up this low, and it deepens quickly, and by the end of Saturday it will approach southwestern shores.

“It looks like it will bring gales to western coasts and there is the risk of some severe gales.”

The Atlantic cyclone has been building up in the South West of the UK (Image: WX Charts)

Disruptive weather threatens to continue through next week after a brief respite on Monday, he said.

He added: “Rain and gales will cross the country on Saturday night into Sunday.

“Temperatures will be similar to Saturday, not far from average for the time of year.

“There will be some respite between weather systems, but on Tuesday and Wednesday we will see some more wet weather.”

Britain is back braced for impact with storms back in the forecast just weeks after Storms Dudley, Eunice and Franklin wrought mayhem at the end of winter.

High pressure responsible for the cold snap is retreating across Europe allowing Atlantic low-pressure systems to crash into Britain.

Britons hoping to get out and about this weekend are warned for a ‘rough spell of weather’ ahead.

John Hammond, meteorologist for weathertrending, said: “It’s going to be a pretty rough spell through the weekend.

“An area of low pressure closes in on us, and there will be some wind and rain showers.

“The main theme will be the wind particularly later on Saturday and into Sunday.

“A swathe of very strong winds will push up the western side of the UK.

There is no disguising the fact that it will be a rough weekend of weather, with some impacts possible as well.”

The Met Office has issued a severe weather warning for wind across south-western Britain and parts of Scotland through the weekend.

It warns gusts of up to 65mph threaten to whip up colossal waves putting coastal regions back on flood alert.

After a stormy start to the weekend, winds will continue to gather strength tomorrow as they scour western coasts.

A Met Office spokesman said: “A swathe of strong winds are likely to track up the Irish Sea through Sunday.

“Winds may reach 50-60 mph along mainly coastal districts, with the core of the stronger winds tracking northwards through Sunday over the region.

“There is a small chance of winds exceeding this, possibly reaching severe gales along more exposed coastal regions with winds reaching 65 mph.

“This may lead to some poor coastal conditions and transport disruption.”

A battleground between the Atlantic and cold Continental air over the UK threatens ‘dangerous’ weather conditions.

This weekend’s storm blast could bring a touch of snow to high ground in the north, forecasters say.

Jim Dale, meteorologist for British Weather Services, said: “We are not out of the woods yet in terms of unsettled or even wintry weather.

“It is not uncommon to see snow at this time of year, and when the mild air from the south meets cold air over the UK there is a battle between the two and this could yet bring some snow to high ground.

“It is important to warn people that conditions like we are expecting can be dangerous, especially in exposed regions, and this is particularly relevant in hilly, mountainous regions.”