Oil giant BP faced a renewed backlash over its involvement in Russia after it was accused of earning ‘blood money’ by a top aide to Ukraine president Volodymyr Zelensky.

BP pledged after Vladimir Putin’s invasion of Ukraine in February that it would sell its 19.75 per cent stake in Russian oil firm Rosneft – but nine months later still holds the stock.

Oleg Ustenko, Zelensky’s chief economic adviser, said in a letter to BP boss Bernard Looney that there was ‘no evidence on which to judge BP’s claim’ that it was trying to pull out. 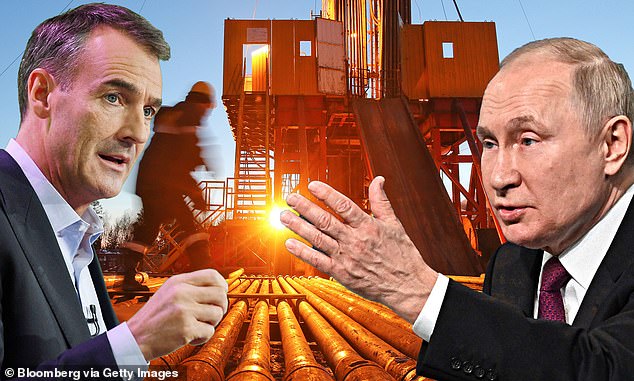 He pointed out that it was still in line for hundreds of millions of pounds in dividends. In the letter received on Wednesday, Ustenko told Looney: ‘No accounting mechanisms or statements from BP will change this fact. This is blood money, pure and simple.’

BP has not received any dividends from Rosneft since it announced that it planned to divest its stake, and took a one off £18.7billion hit as it wrote off the value of the shareholding.

Its dividend from Rosneft is supposed to be paid into a restricted Russian account which it can only access by permission of the Kremlin. In theory, the account should have received a payout of more than £600m though BP said it had not been notified of any such transfer.

In his letter, reported by The Guardian, Ustenko said: ‘BP was among the first of the oil majors to announce its intention to exit Russia by selling its stake in Rosneft, the Kremlin’s oil company.

‘Yet after nine months of Russian aggression, war crimes and the bombardment of civilian infrastructure, all funded and fuelled by Russian oil, gas and coal, BP remains a shareholder in Rosneft. Our position is clear – companies must leave Russia or risk complicity with Russia’s war crimes.

‘Any European company which continues to profit from the Russian fossil fuel sector should establish a fund to dedicate that money to Ukrainian victims of the war.’

Labour MP Margaret Hodge said: ‘I think it’s appalling that BP have not made further progress on getting out of oil in Russia and they are there supporting Putin’s regime in effect.

‘They are saying the money’s locked in Russia but it will get unlocked. The Government ought to insist that that money is for reparations in Ukraine.’ The Moral Rating Agency, a campaign group which exposes Western firms’ presence in Russia, accused BP of immorality.

A spokesman said: ‘BP is ironically actually enjoying vastly higher profits as a shareholder while Russian oil is being sold around the back of international embargoes to collaborating countries like China and India.’

The agency has been highlighting other companies that ‘promise to leave Russia but don’t’.

Consumer goods giant Unilever said in March that it would only supply ‘essential food and hygiene products’ to Russia but was revealed recently to be still selling Magnum and Cornetto ice creams there.

BP has brought in a total of £3.75billion in dividends from Rosneft since 2013.

It said yesterday: ‘BP is exiting Russia. We have absolutely no intention of returning to ‘business as usual’.

‘Just three days after Russia’s attack on Ukraine, BP announced that we will exit our shareholding in Rosneft and other businesses in Russia – we said the attack was ‘a fundamental change’. This is still our position.’