Ukraine spy chiefs claimed Russia’s tyrant was ready to stunt up a “false flag” assault to stop the West from halting his invasion. He would then hold his rival President Volodymyr Zelensky responsible for any lethal nuclear leaks which could once again sweep Europe. A chilling warning from Ukraine’s Intelligence Directorate said Putin was plotting a man-made catastrophe at the Russian-held power station, which blew up in April 1986.

Saboteurs may plant “evidence” such as bringing in bodies from outside. The online statement added: “The creation of a technological catastrophe is planned at the controlled Russian forces of the CAEC [Chernobyl], the responsibility for which the occupiers will try to translate to Ukraine.”

The alarm was raised after Ukrainian authorities lost all communication with staff at the site, less than two hours drive north of the capital Kyiv and close to the border with Putin’s ally Belarus.

Power supplies, which are vital to keep the active part of nuclear reactors cool, were disconnected.

Worried officials in Ukraine’s Ministry of Defence said the Russian president was plotting a man-made disaster. Such “false flag” tactics are known to be used by the Kremlin in military conflicts.

The defence ministry warned Russia was preparing to “create fake evidence” to confirm their version of events. This could see Putin’s troops collecting bodies from Antonov airport in the town of Hostomel near Kyiv before repositioning them around the nuclear site.

Kyiv sources said Belarusian saboteurs posing as nuclear scientists had been brought in to set in train a disaster. The Intelligence Directorate added: “Without getting the desired result from the ground military operation and direct negotiations, Putin is ready to commit nuclear blackmail of the world.

“Putin’s actions will have catastrophic consequences for the whole world. It looks like this is exactly what the Russian dictator is counting on.” 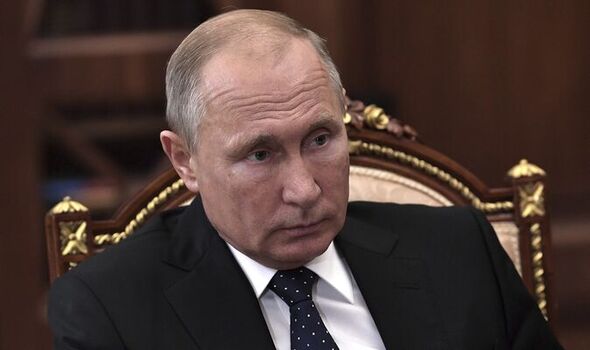 Russia seized control of the nuclear power plant just a day after launching its land, sea and air invasion of Ukraine on February 24. Ukrainian authorities said they did not know what current radiation levels are at the site.

The energy minister Herman Halush-chenko said they had not received any information since the plant was captured.

He added Ukraine also had no control over the Zaporizhzhia nuclear power plant, where 500 Russian troops were stationed.

Ukraine had warned that there was a danger of a radiation leak at Chernobyl after electricity was cut off.

But staff at the UN nuclear watchdog, the International Atomic Energy Agency (IAEA), said that so far they had seen “no critical impact on security”.

State-run nuclear company Energoatom said a high-voltage power line had been damaged during earlier fighting between Ukrainian troops and Russian forces and the Chernobyl plant had been cut off from the national power grid.

It said “radioactive substances” might eventually be released, threatening other parts of Ukraine and the rest of Europe, if there was no power to cool spent nuclear fuel stored at the plant.

Ukraine’s foreign minister Dmytro Kuleba said that reserve diesel generators were capable of powering the plant for no more than 48 hours.

He added: “After that, cooling systems of the storage facility for spent nuclear fuel will stop, making radiation leaks imminent.

“I call on the international community to urgently demand Russia to cease fire and allow repair units to restore power supply.”

The IAEA said online that the “development violates (a) key safety pillar on ensuring uninterrupted power supply” but added that “in this case IAEA sees no critical impact on safety”.

The body had warned that the systems which monitor nuclear material within the radioactive waste facilities at Chernobyl had stopped transmitting data after the power was cut.

The Chernobyl plant, which is still radioactive, lies about 60 miles from Kyiv. Its fourth reactor exploded in April 1986 during a botched safety test, sending clouds of radiation billowing across much of Europe. Although the official direct death toll was put at 31, some sources attribute thousands more to the accident.

Meanwhile Vasily Nebenzya, Russia’s ambassador to the UN, yesterday presented the Kremlin’s allegations that Ukraine and the US had a plot to spread biological weapons via migratory birds, bats and insects.

Nebenzya warned eastern European countries that biological agents could spread across Ukraine’s borders: “We call upon you to think about a very real biological danger to the people in European countries, which can result from an uncontrolled spread of bio agents from Ukraine. If there is a such a scenario then all Europe will be covered.

“Risk of this is very real given the interests of the radical nationalist groups in Ukraine are showing towards the work with dangerous pathogens conducted together with the ministry of defence of the United States.”

President Zelensky again stood firm against the Russian threat and encouraged the Ukranian people to stay strong. He said: “I know that many people have started to feel tired. I understand. Impatient. I understand. This is life.

“When we mobilize, when we see our victories and the loss of the enemy on the battlefield, we expect the struggle to end sooner. We expect the invaders to fall faster.

“But this is life, this is war. This is a struggle. Time is needed, patience is needed. Our wisdom, energy, and ability to do our job to maximum…for us to come to victory.

“It is not possible to say how many more days it will take to liberate Ukrainian land but it is possible to say that we will do that because we have achieved the turning point strategically. We are on the way to victory. This is a patriotic war.”

He added: “A war against a strong, obstinate enemy who doesn’t pay attention to thousands of their own soldiers, who gathered conscripts all over Russia to send them to this war.”

Ten officials from Rosatom, including two senior engineers, then unsuccessfully attempted to enter the plant and take control of operations, Mr Kotin said during a televised interview.

He continued: “On the territory [of the plant] there are around 500 Russian soldiers with automatic weapons” before adding: “Our staff are in an extremely bad psychological state.”

Putin took his “classic Russian playbook” accusation that Ukraine may use chemical weapons to the United Nations yesterday. Experts warned Russia’s move for the world body’s Security Council to discuss the claims was a Kremlin “gaslighting” tactic used in previous conflicts.

Moscow typically makes claims against other nations to justify doing exactly the same thing to them.

And fears grew yesterday that Putin, who says Ukraine has been making deadly, illegal weapons with US backing, may be about to use his own.

Ukrainian forces have seized gas masks from captured Russian troops, indicating chemical weapons could be used. Former US assistant defence secretary, Andy Weber, said: “I think it is a grave concern than Russia, like its ally Syria, will use chemical or biological weapons against the people of Ukraine, then blame it on Ukraine.” He said such “false flag” moves were a common Kremlin tactic, backed by “insidious Russian propaganda”.

Mr Johnson echoed Western fears over the weapons after Moscow accused Kyiv of planning to use them (Image: Phil Noble/PA)

The West warned Putin yesterday that he would face a “dramatic increased response” should he use them.

UK technology minister Chris Philp said it would be an “outrage against humanity”. He accused Russian diplomats in London of spreading disinformation to create a “false narrative” Ukraine may deploy them.

Mr Philp called it “clearly ridiculous and totally untrue” and added: “Sometimes they do that in preparation [for an attack]. But I hope that is not what they are contemplating. The use of chemical weapons in any theatre of war, but certainly one where there are lots of civilians, is totally unacceptable.”

Earlier, Mr Johnson echoed Western fears over the weapons after Moscow accused Kyiv of planning to use them.

He said: “The stuff that you’re hearing about chemical weapons is straight out of their playbook.

“They start saying that there are chemical weapons that have been stored by their opponents or by the Americans.

“And so when they themselves deploy chemical weapons, as I fear they may, they have a sort of maskirovka – a fake story – ready to go.

“You’ve seen it in Syria. You saw it even in the UK. That’s what they’re already doing.

“It is a cynical, barbaric government.”

What is happening where you live? Find out by adding your postcode or visit InYourArea

SIGNS of the growing unease of loyal Russians against Putin’s war was seen on state TV as talk show guests said the war was worse than the disastrous Soviet occupation of Afghanistan, writes Chris Riches.

Bagdasarov called on Putin to end the attack, while warning allies like China and India could soon turn their backs on Moscow, stressing: “We don’t need to stay there longer than necessary. Do we need to get into another Afghanistan, but even worse? There are more people and they’re more advanced in weapon handling. If this starts to transform into an absolute humanitarian disaster, even our close allies like China and India will be forced to distance themselves from us.”

Shakhnazarov fumed on Monday at the Putin line that the invasion is a limited “special operation” to protect Russian separatists in the Donbass region of Ukraine. He added: “Ending this will stabilise things within the country. Others will say sanctions remain, but discontinuing the active phase of a military operation is important.” The pair spoke out despite new laws threatening 15 years in jail for publishing “fake news” about the war.