Britain’s Covid wave is continuing to fizzle out with daily cases, deaths and hospitalisations all trending downwards, official data shows.

There were another 39,656 infections recorded over the last 24 hours, marking a fall of a quarter compared to last Wednesday, according to Government dashboard data.

Daily cases have consistently fallen for more than three weeks in a row now, and the Office for National Statistics (ONS) weekly infection survey is mirroring that trend.

There were also 164 Covid deaths registered today, which are down 17 per cent from last week.

Latest hospital figures show another 970 admissions were recorded on February 19, which was the first time they have dipped below 1,000 so far this year.

The last time there were three-digit daily Covid hospital admissions in the UK was in mid-December before the Omicron surge was felt in the NHS.

A significant share of Covid admissions and deaths are now not primarily caused by the virus — the effect of the milder but much more infectious variant.

The faltering drop in stats combined with the severed link between infection and severe disease has given ministers the confidence to start winding down the official dump of Covid statistics at weekends, with a view to scrapping the daily numbers completely by spring.

It comes as the ONS survey — seen as the most trustworthy surveillance study — estimated England’s cases fell for the second week in a row, dropping 13 per cent to the equivalent of one in 25 people being infected over the week to February 19.

The survey — based on 100,000 random swabs — is set to continue once free testing ends in April, and is seen as the ‘gold-standard’ for monitoring the virus by ministers. 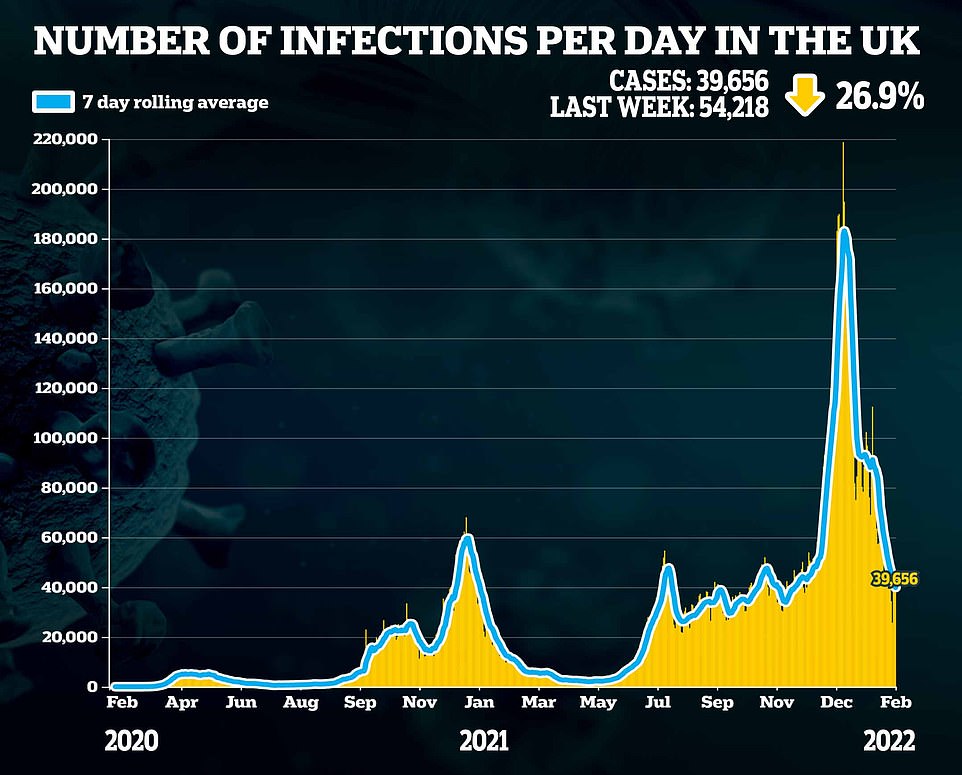 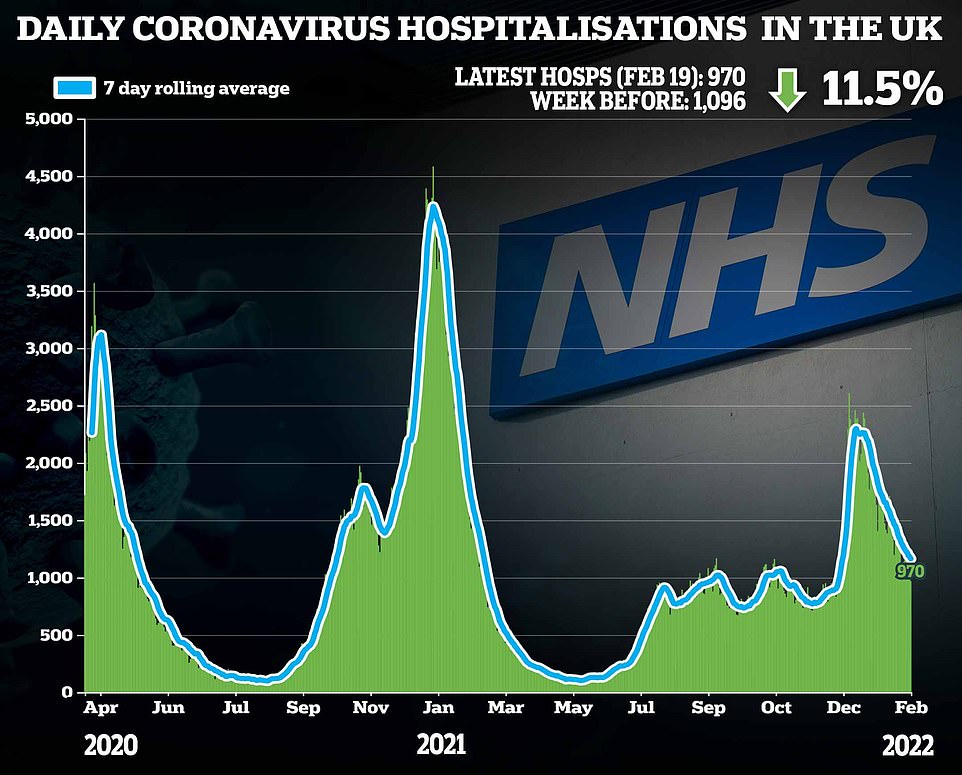 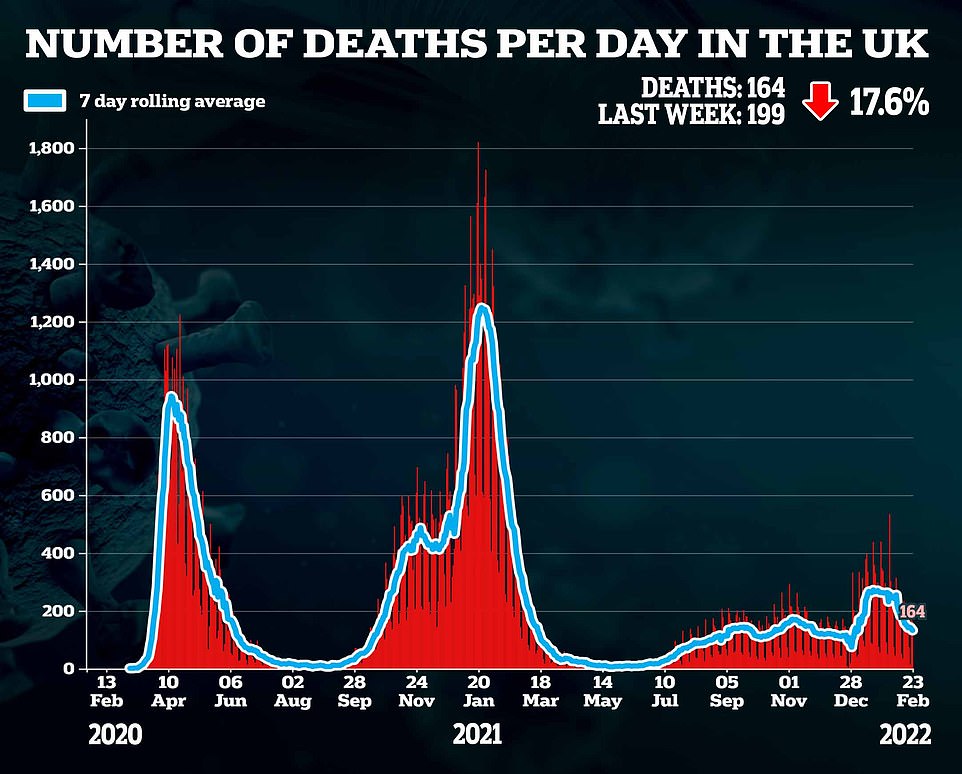 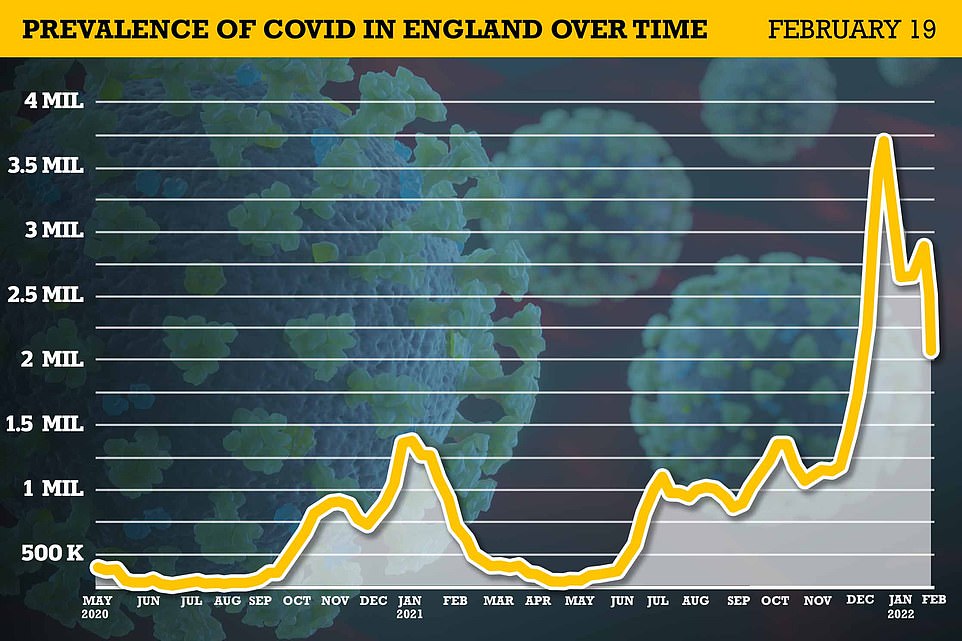 Office for National Statistics (ONS) statisticians estimated there were 2.1million infections on any given day in England in the week up to February 19, down 14 per cent on the 2.4million per day the week before

UK Health Security Agency data showed cases dropped across all UK nations today compared to the same time last week, falling in England (down 30 per cent) Northern Ireland (down 20 per cent), Wales (down 19 per cent) and Scotland (down nine per cent).

The number of Covid swabs carried out every day is trending downwards to around 810,000, which may partially explain the trend.

But the positivity rate — the proportion of swabs that pick up the virus — is also ticking downwards, suggesting there is a real-terms drop in virus cases across the country.

A high street pricing war over lateral flow tests broke out today as Superdrug revealed it will undercut rival chain Boots by offering Covid swabs for just £1.99 each.

Superdrug pledged to sell individual tests for 51p less than Boots, which yesterday became the first pharmacy to unveil its pricing strategy ahead of No10’s move to ditch free swabbing in April.

People who are not vulnerable to the virus and wish to continue testing will have to purchase the rapid kits from supermarkets, high street pharmacies and potentially even petrol stations on the first day of that month.

Superdrug said it would offer the individual swabs at a lower price than its competitor and will also sell multiple tests at a discounted price, with packs of five costing £9.79. It means the tests will be 18 per cent cheaper than Boots, which will eventually charge £12 for a pack of five or £2.50 per individual swab.

And Superdrug confirmed it would start offering swabs at its price in the coming days, significantly earlier than Boots, which started selling them online £6 each today.

The ONS survey, which is currently published twice a week because prevalence is so high, estimated there were 2.1million cases across England last week.

It found infections fell in every region, except for the South East where the trend is ‘uncertain’.

Changes to infection levels in Wales and Northern Ireland over the week were also unclear, statisticians said, although both counties saw clear falls over the last two weeks.

Around one in 30 people had the virus in Wales during the week — the lowest of the four nations — while Northern Ireland had the highest prevalence, with one in 14 people testing positive.

In England, the proportion of people testing positive varied across age groups, with the highest being for children aged two to 11 at 4.84 per cent.

The most vulnerable over-70 age group continued to see the lowest prevalence at 2.08 per cent, the ONS estimated.

Esther Sutherland, head of strategic development for the ONS Covid Infection Survey, said: ‘The number of people testing positive has decreased in all regions of England, apart from the South East where the trend is uncertain.

‘While our numbers indicate a decrease in infections in Northern Ireland and Wales, the trend is uncertain in the most recent week.

‘Only in Scotland have we detected a rise in infections. That appears to have been driven by the Omicron BA.2 variant, the presence of which has also increased in the rest of the UK.’

It comes after Mr Johnson confirmed the UK will keep the ONS surveillance scheme, following fears that the country’s crucial radar was going to be turned off in the coming weeks.

Unveiling his ‘Living with Covid’ strategy in the Commons on Monday, he described the survey as being ‘world-leading’ and promised it would continue tracking the virus in ‘granular detail’ although it will be scaled down.

Under the PM’s post-Covid era blueprint, self-isolation laws will be axed from midnight.

Masks will no longer be compulsory on Tubes and buses in London as well, but people in the capital are still being ‘strongly recommended’ to continue covering up out of respect for fellow passengers.

Transport for London said it will no longer be a ‘condition of carriage’ to wear masks on its services but customers and staff will be ‘strongly recommended’ to wear face coverings regardless, in line with advice to passengers using national rail services.

TfL is also urging the use of face coverings in taxis and private hire vehicles by both drivers and passengers. 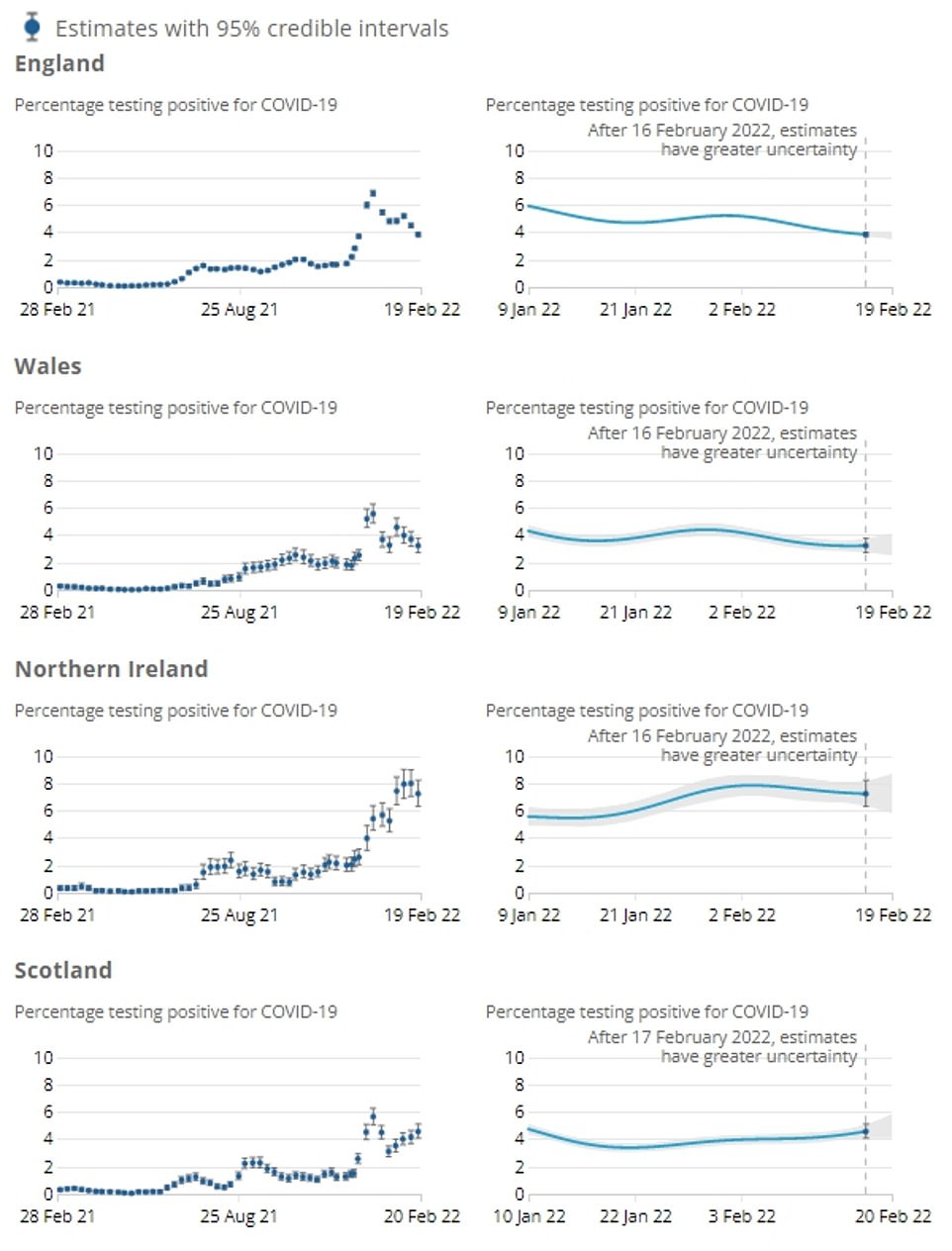 Changes to infection levels in Wales and Northern Ireland over the week were ‘uncertain’, statisticians said, although both counties saw clear falls over the last two weeks. Infections started to rise in Scotland, where one in 20 had the virus daily 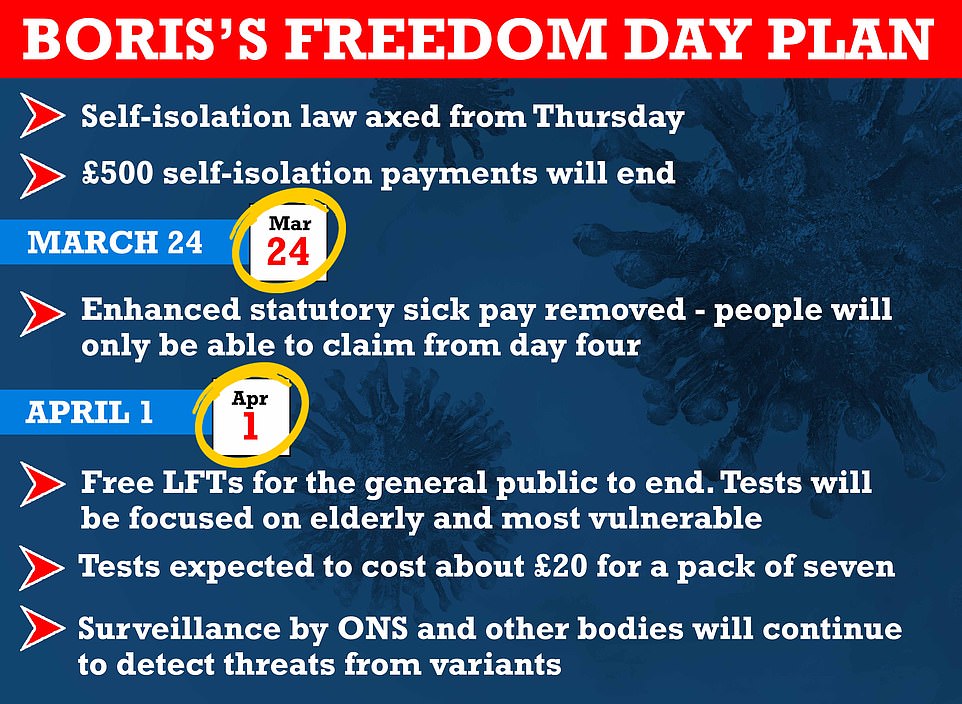 Mrs Sturgeon yesterday unveiled her plan for a ‘sustainable return to a normal way of life’ in Scotland as she promised to axe remaining coronavirus rules amid a furious row with Boris Johnson over scrapping free Covid tests.

The First Minister said the use of Covid certificates will end from Monday February 28 and the legal requirement to wear a face mask in certain indoor settings will be converted to guidance from March 21.

But she said access to free tests will continue ‘from now until further notice’ despite Mr Johnson committing to axing them in England from April 1.

The Scottish government will publish a detailed document in March setting out how it will gradually transition away from mass free testing in a ‘careful and phased manner’.

That raises the prospect of people in Scotland still being able to access free tests when people in England will have to pay for them.

However, it is currently unclear how Mrs Sturgeon would fund continued access to free tests, with Downing Street stressing it will not be providing any extra funding given the provision is ending in England.

The SNP is calling on the Treasury to provide more money but Chancellor Rishi Sunak is not expected to budge on the issue.

That means Mrs Sturgeon would likely have to cut spending in another area if she wants to continue to provide free tests beyond Mr Johnson’s April 1 cut-off date.

Share
Facebook
Twitter
Pinterest
WhatsApp
Previous articleVitamin B12 deficiency: The 'subtle' signs in the way you walk to look out for
Next articleThe Real Dirty Dancing caught up in 'fix' row as fans note Tom Malone Jnr is a professional dancer
RELATED ARTICLES
Heath