Unilever effectively abandoned its pursuit of Glaxosmithkline’s consumer healthcare arm last night by insisting it would not pay a penny more than £50billion.

The consumer goods giant, whose brands include Marmite, Hellmann’s, and Ben & Jerry’s, has had three bids turned down in recent weeks.

GSK chief executive Emma Walmsley, who is planning to spin off consumer health into a separate company listed on the stock market, said even the latest bid of £50billion from Unilever ‘fundamentally’ undervalued the business. 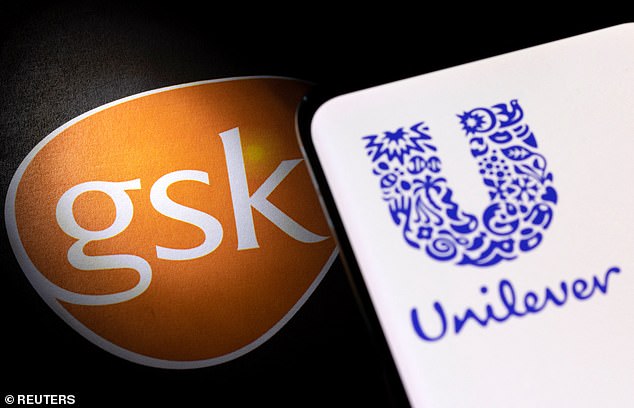 Final offer: Unilever, whose brands include Marmite, Dove, Hellmann’s and Ben & Jerry’s, has seen three bids turned down by GSK in recent weeks

Her company’s brands include Sensodyne, Aquafresh, Panadol and Advil.

But Unilever boss Alan Jope on Monday, insisted GSK was a ‘strong strategic fit’ and he would continue to push for a deal. Shares in Unilever tumbled, however, amid fears it would overpay.

Jope’s plans met fierce criticism in the City as investors and analysts suggested he should fix problems within Unilever rather than embark on an expensive acquisition.

Yesterday, Unilever appeared to throw in the towel, saying: ‘We will not increase our offer above £50billion.’

Sources said it was only interested ‘if the other side wants to engage at that level’.

He said: ‘Rather than having the deal refused by investors it is better not to let it get to that stage. This gives them an exit, meaning it looks like it is their decision not to go any further.

‘But that is damage limitation the market will see through. Many questions will be asked in terms of how they came up with this and the valuation, what else is wrong with the business?’

But he suggested that GSK bosses may also be ‘kicking themselves’, having overplayed their hand trying to flush out a higher offer.

Unilever lost 10 per cent of its value on Monday and Tuesday – reducing its market cap from £100billion to £90billion – as investors reacted with horror to the planned deal.

On Monday, Jope said Unilever was shifting its focus to high-growth health, beauty and hygiene businesses.

He said that it would sell low-growth food businesses, which could include Marmite, to provide the funds for takeovers of beauty, health and hygiene brands.

He said that the FTSE 100 giant could even offload its entire food and refreshments business.

Analysts welcomed the shift in focus to faster-growing areas after years of stagnant sales at the group. But they questioned the value of such a huge takeover.

GSK is planning to press ahead with its plans to demerge the consumer healthcare business, which is 32 per cent-owned by Pfizer.

Its shares rose sharply on Monday on hopes that interest from Unilever could trigger a bidding war.

But they fell back 2.1 per cent yesterday.

Is my state pension too low because the final NI year is missing?