US 'dragon' spy plane lands at RAF base as NATO orders 30,000 troops to Putin's doorstep

The secretive surveillance aircraft, an icon of the Cold War, can fly at an altitude of 70,000 feet, capturing imagery and intercepting signals intelligence, and is said by pilots to be one the hardest aircraft to fly. Such is the height at which it operates, pilots must wear compression suits at altitude, and when landing, rely on a fellow pilot on the ground to guide them as they land on one wheel.

Tens of thousands of troops from Europe and North America are now training in arctic conditions in Norway under “Operation Cold Response.”

The exercise is defensive and long-planned, and it demonstrates NATO’s ability to respond decisively to any threat, from any direction.

Around 30,000 troops from 27 nations, including NATO’s close partners Finland and Sweden, are taking part in the exercise, as well as about 220 aircraft and more than 50 vessels.

A group of elite Royal Marines also form part of the training exercise which although timed and planned, sends a gentle reminder to Moscow of the consequences should the war spread West. 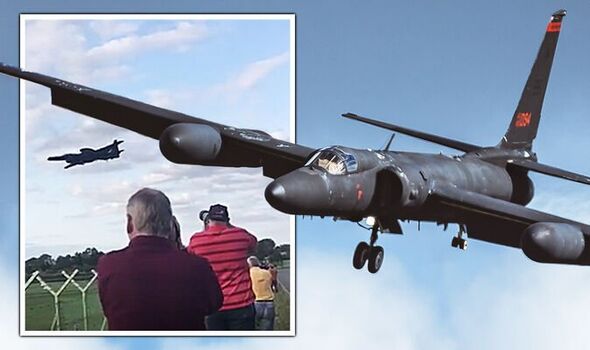 The U-2 is said to be one of the hardest aircraft to fly for pilots (Image: SWNS)

Highlighting the importance of the mission, and remaining highly diplomatic in the process of doing, operation Commander Yngve Odlo said: “It’s a defensive exercise.

“It’s not a military operation with an offensive purpose.”

Organised every two years, the naval, air and ground drills are held over vast areas of Norway, including above the Arctic Circle, and in sub-zero temperatures.

They will, however, stay several hundred kilometres away from Norway’s border with Russia.

A spokesperson for the Russian Embassy in Oslo said: “Any build-up of NATO military capabilities near Russia’s borders does not help to strengthen security in the region.”

Royal Marines are part of the training exercise (Image: Getty)

A statement by NATO says: “Cold Response deals with a fictional scenario where Norway is attacked and NATO’s collective defence clause, Article 5, is invoked.

“NATO Allies are transparent in their exercises and respect their international commitments.

“Observers from all members of the Organization for Security and Co-operation in Europe have been invited to Cold Response, but Russia declined the invitation.

“Norway has extended the registration deadline for observers until the 23 March.”

Although not known if the U-2 spy plane is part of the operation, the mere presence of the aircraft during the ongoing crisis in Ukraine is notable.

However, surveillance aircraft have long been used by both Russia, the US and its allies under the Treaty on Open Skies, an agreement allowing unarmed spy aircraft to conduct missions over the entire territory of member nations.

The treaty is designed to enhance mutual understanding and confidence by giving all participants, regardless of size, a direct role in gathering information about military forces and activities of concern to them.

With 32 nation-state members, the treaty is one of unlimited duration and is open to membership by other states.

Is NATO preparing for the worse? Will the war spread West into mainland Europe? Should NATO assist Ukraine with a no-fly zone? Let us know your thoughts by CLICKING HERE and joining the debate in our comments section below – Every Voice Matters!

Francis Gary Powers and the wreckage of his U-2 aircraft shot down over the Soviet Union in 1960 (Image: Getty)

The U-2 spy plane has made news in the past during times of tension.
During the height of the Cold War, on 1 May 1960, a United States U-2 spy plane was shot down by the Soviet Air Defence Forces while performing photographic aerial reconnaissance deep inside Soviet territory.

The single-seat aircraft, flown by pilot Francis Gary Powers, was hit by an S-75 Dvina surface-to-air missile and crashed near Sverdlovsk.

The US Government denied the aircraft had been on a surveillance mission having taken from Pakistan.

Mr Powers was sentenced to 10 years’ jail time in Moscow but subsequently released back to the US in a prisoner swap with Soviet spy Rudolf Abel in 1962.