Prices in the US are rising at their fastest rate in more than 40 years as the cost-of-living crisis bites.

Inflation hit 8.5 per cent in March, its highest level since 1981 when Ronald Reagan entered the White House, according to the Department of Labour, as the pandemic and war in Ukraine are driving up costs around the world.

The UK is due to release its own data for March today, which is set to show inflation rising from the 30-year high of 6.2 per cent, which was reached in February. 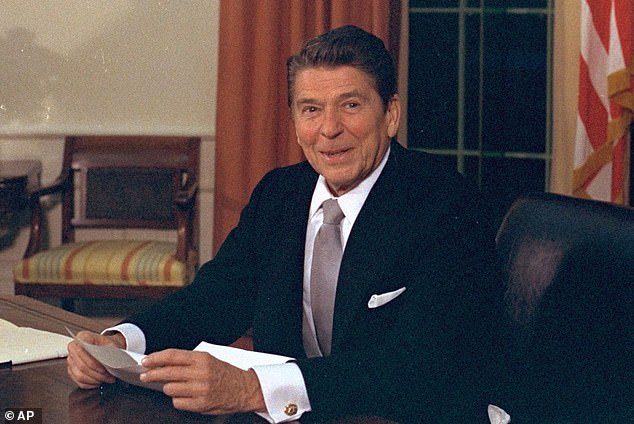 US inflation hit 8.5% in March, its highest level since 1981 when Ronald Reagan (pictured) entered the White House, according to the Department of Labor

Britain’s inflation rate is expected to pass 8 per cent this spring following the latest hike in the energy price cap by regulator Ofcom.

In the US, the prices of fuel, housing and food were the biggest contributors to inflation.

Those costs are particularly hard to dodge for low-income Americans, and their rapid rise will deal a blow to President Joe Biden’s hopes of retaining control of Congress in the November mid-term elections.

Countries around the world have been battling against red-hot inflation in recent months.

Price rises were sparked by the pandemic recovery – households were keen to spend money again, but businesses were struggling with their international supply chains and staffing levels.

Now the war in Ukraine has worsened the problems.

Energy prices are rocketing, due to Russia’s position as a major exporter of oil and gas, and food prices are spiralling higher as both Russia and Ukraine produce vast amounts of the world’s wheat.

SHARE OF THE WEEK: Investors hope for Harbour Energy boost