Used car sales shrank by almost a fifth in the second quarter of 2022 with 407,820 fewer second-hand models changing hands between April and June than a year earlier, latest industry figures show.

Trade body bosses have been quick to suggest this isn’t a result of cost-of-living cutbacks but ‘an inevitable knock-on effect’ of there being fewer new models entering the market.

However, with used car values still at near-record-high levels and showing no sign of tumbling soon, others say the squeeze on disposable income has means drivers are deciding to keep hold of their existing cars for longer. 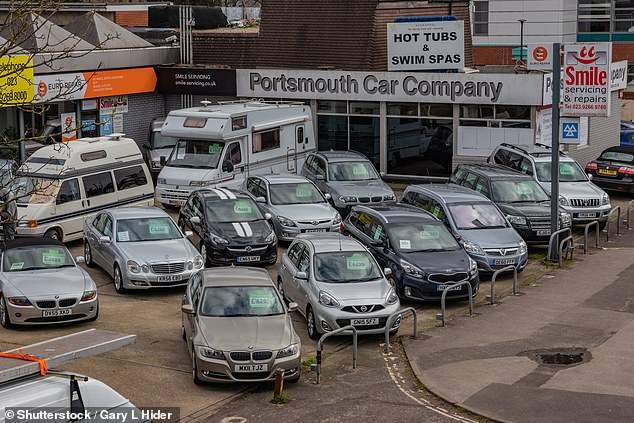 Not enough used cars to sell: The SMMT says an 18.8% decline in transactions in Q2 was an ‘inevitable knock-on effect’ from the ‘squeeze on new car supply’, as dealers run low on stock

The UK’s used car market shrank by 18.8 per cent during the second quarter of 2022, according to results posted by the Society of Motor Manufacturers and Traders.

Declines were recorded in each month in the quarter, with falls in April, May and June of 16.8 per cent, 20.9 per cent and 18.6 per cent respectively.

The SMMT says the drop in transactions should not be attributed to motorists tightening their belts but a knock-on from issues strangling the new car market for the last two years.

The ongoing shortage of semiconductor chips has severely restricted vehicle output since the pandemic – and is now starting to impact the second-hand market, says the industry body.

Mike Hawes, chief executive at the SMMT, said it was ‘inevitable that the squeeze on new car supply would filter through to the used market’.

Sue Robinson, chief executive of the National Franchised Dealers Association, adds: ‘Current new car volumes are restricting the number of part-exchange vehicles reaching the market that would normally help supply dealer forecourts, and at the same time some consumers needing a car quickly are turning to the used car market to source their next vehicle.’

The SMMT confirmed that declines were recorded in each month in the quarter, with falls in April, May and June of 16.8%, 20.9% and 18.6% respectively

‘Given the growing squeeze on consumer finances it’d be tempting to attribute Q2’s weakening used car sales on crumbling levels of demand, but in reality, the market is reeling from a blow in basic economics – there’s simply not enough cars to sell,’ he explained.

‘Due to the double whammy of forecourt closures and a shortage of microchips, nearly two million new cars were ‘lost’ over the course of the pandemic, resulting in a significant shortfall of younger cars re-entering the market for sale.

‘Despite the economic uncertainty around the rising cost of living, surging fuel prices, and the latest hike in interest rates, for now, our data offers a stable outlook for the used car market.

AutoTrader says it expects used car prices to ‘remain exceptionally strong’ for the remainder of the year.

‘Anyone predicting an imminent crash in retail prices will be sorely disappointed,’ Plummer added. 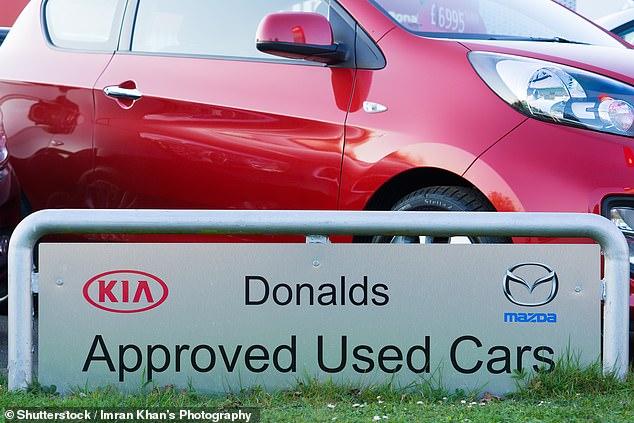 Industry insiders say demand for second-hand cars remains high despite the decline in sales in the second quarter, which will likely keep average prices high

Chris Knight, UK automotive partner at analyst, KPMG, seconded Mr Plummer’s prediction for second-hand car values to remain strong: ‘Consumer demand for used cars may well drop in the coming months, but the supply landscape is such that it’s unlikely that we see major price corrections in the near term.’

However, not everyone is in agreement.

Online used vehicle marketplace, Heycar, says it tracks the average value of three and five-year-old cars advertised on its website and saw a drop in prices last month. 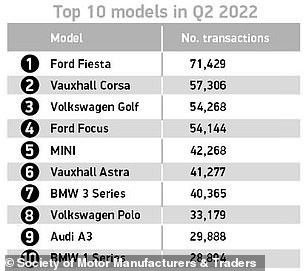 The Ford Fiesta remains the UK’s most popular used car

‘These are indications that the cost of living crisis is having more of an impact on car buying behaviour, resulting in a drop in demand,’ said Heycar’s consumer editor, Sarah Tooze.

While second-hand motor sales as a whole shrank in Q2, there was an increase in the number of transactions of used electric cars.

Pure EV sales grew by 57.1 per cent in the second quarter to 16,782, while plug-in hybrids held stable with 1 per cent growth.

This is likely due to more availability coming onto the market, with makers prioritising production of EVs in recent months as they push to meet strict emissions targets enforced by the EU.

Yet AutoTrader believes the surge in second-hand electric car demand can be linked to fuel prices soaring to record levels during the months of April to June.

The Ford Fiesta was the most popular used car purchase in the second quarter with 71,429 changing hands, followed by the Vauxhall Corsa (57,306) and Volkswagen Golf (54,268).