Best friends Vanessa Hudgens and Ashley Benson arrived in style to their own Margalicious Margarita event in New York City earlier on Sunday.

The two actors have been close friends for years, and along with actress Rosario Dawson, decided to partner with Thomas Ashbourne Craft Spirits to create their own margarita line. 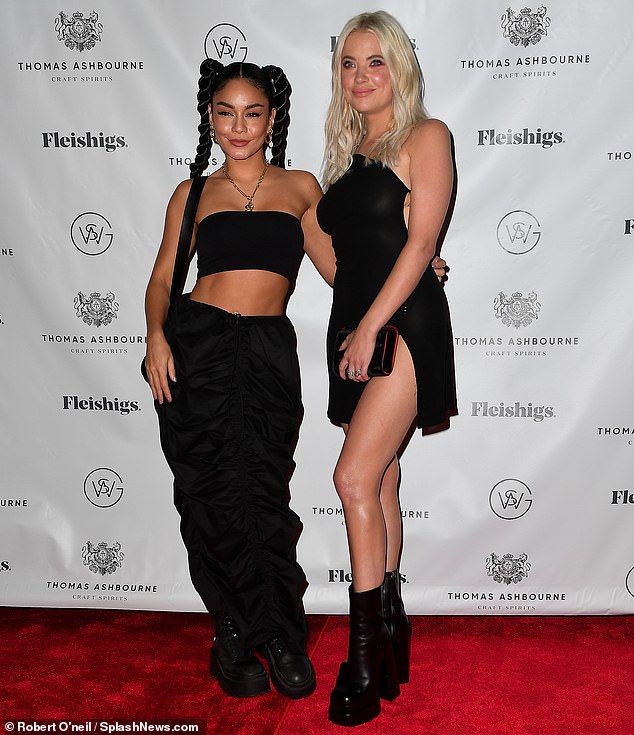 She added a long, black ruched skirt that fell down towards her ankles. The Princess Switch actress slipped into a pair of black combat boots to complete her look for the evening.

Vanessa had a black purse slung over her right shoulder to hold a few items she needed throughout the night.

Her dark brunette hair was slicked back into two long braids that fell down behind her back.

To accessorize her look, the Hallmark channel star added a pair of gold earrings, along with a gold-chained necklace for a finishing touch. 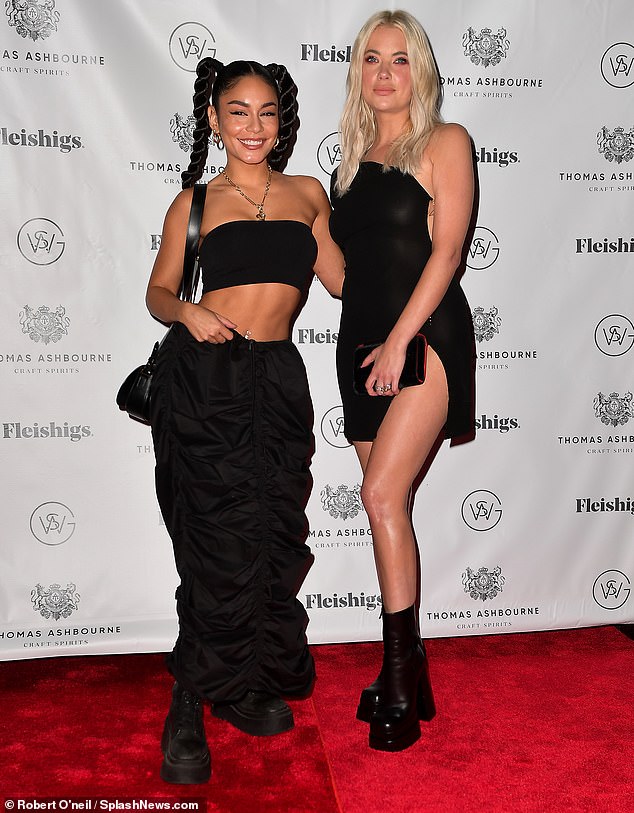 Beautiful: The actresses first crossed paths when they were teenagers, and have developed a close bond and friendship since then 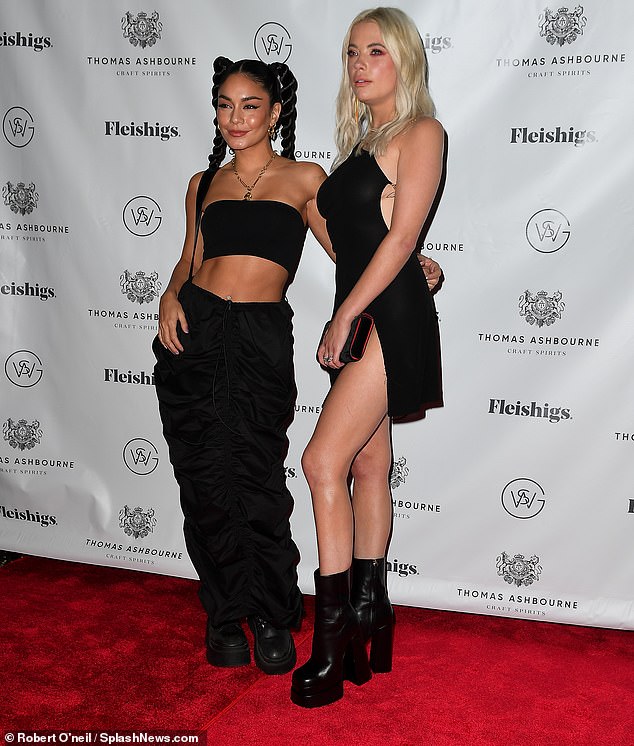 Eye-catching: The two close friends turned heads in color-coordinating ensembles at their special event on Sunday

Ashley followed her friend’s color scheme, and also opted for an all black outfit for the night.

She donned a one-shoulder, black mini dress that showed off her fit physique and toned legs.

The talented actress slipped into a pair of black, platform boots to pull her overall look together. The star held a small, black clutch bag in her hand as she posed for a few photos with Vanessa.

Her blonde hair was parted in the middle, allowing her locks to brush her shoulders in small waves. Ashley’s makeup held a pop of color with a touch of reddish-pink eyeshadow and a nude-colored lipstick.

Vanessa chose a more fierce look with her makeup, comprising of thick black eyeliner and a darker nude-colored matte lipstick. 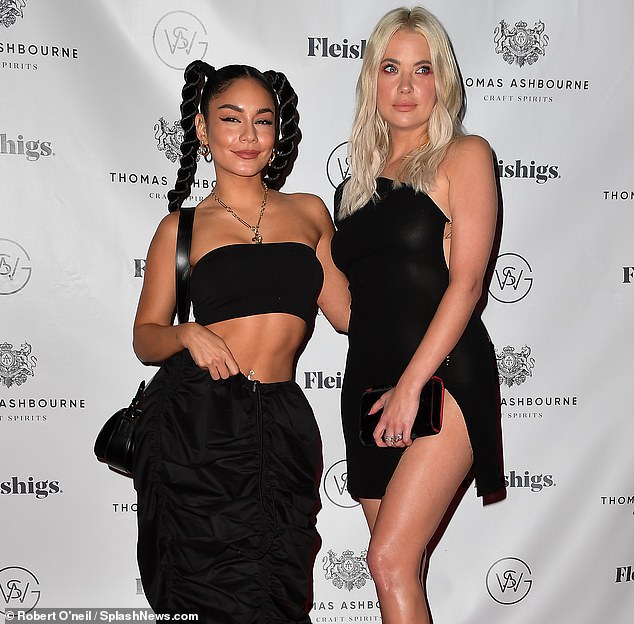 Businesswomen: Both Vanessa and Ashley have partnered with Thomas Ashbourne Craft Spirits to create Margalicious Margaritas with their other close pal, actress Rosario Dawson 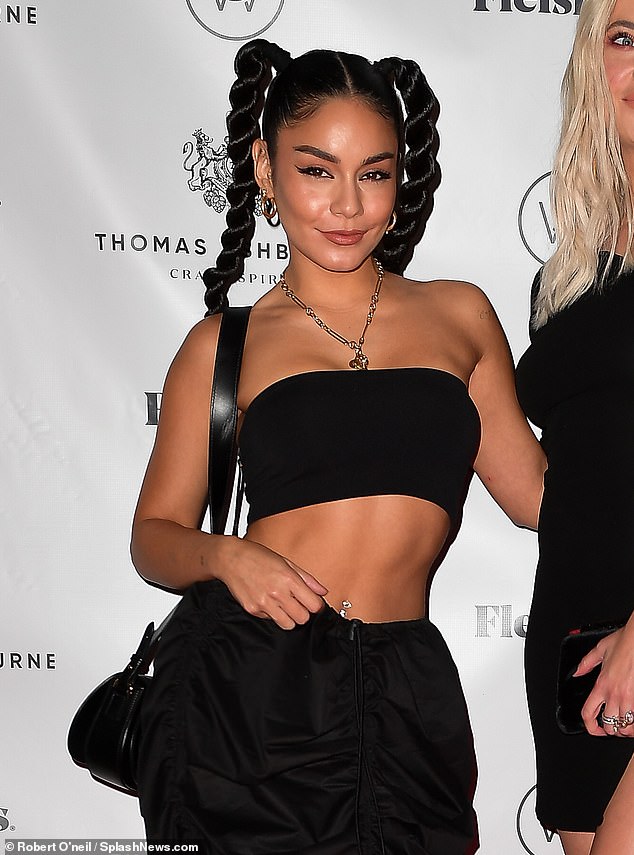 Excited: The close friends appeared to be in high spirits as they celebrated an exciting career venture

Vanessa, Ashely and Rosario recently opened up to People about their business venture together and their long-lasting friendship.

‘These are women that I love and admire,’ the former Disney channel star expressed. ‘I knew that we would be such a great team to put our heads together and create something that we’re really proud of and excited about.’

Vanessa and Ashley have been friends for years, and became acquainted when they crossed paths in acting classes.

‘Vanessa and I have known each other since we were literally children,’ Ashley stated to the entertainment publication.

Rosario, known for her performances in projects such as The Mandalorian, explained that the entertainment industry had brought the three of them together. 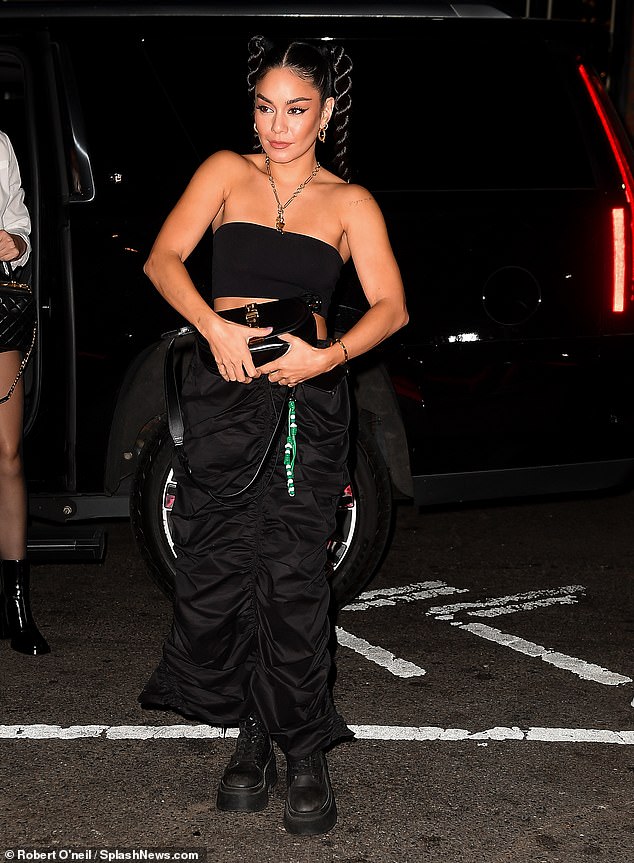 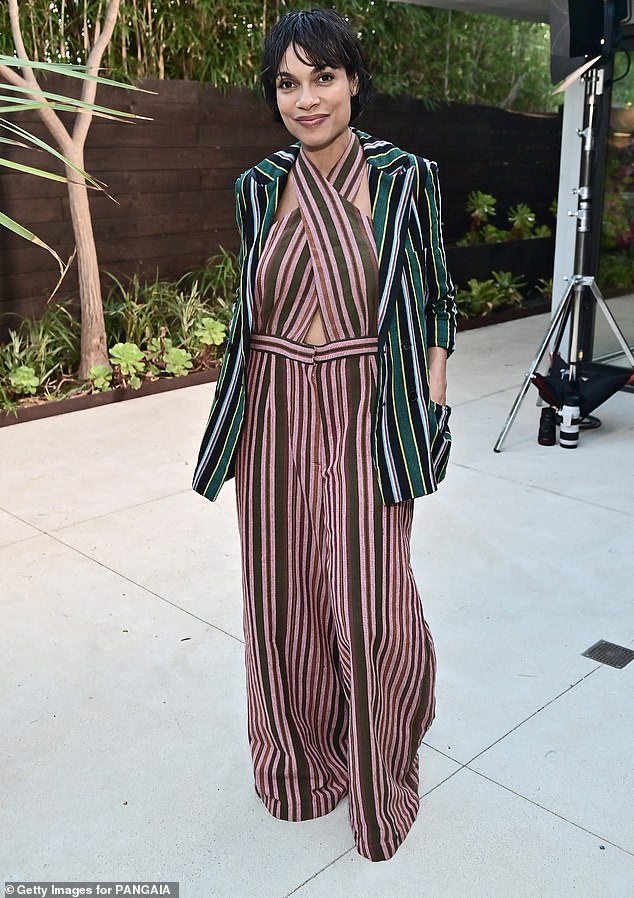 Trio: Rosario joined forces with Vanessa and Ashley to create a specialty margarita cocktail together; pictured earlier in September in Los Angeles

When discussing the Margalicious Margarita to People, Ashley gushed, ‘We’ve had so much fun making it, from perfecting the taste, creating the looks of the cans, the bottles, the colors, and everything.’

Rosario stated that she feels ‘blessed’ to have had the opportunity to be a part of the project, adding, ‘And my offering was the Margalicious name, which was a homage to my daughter Isabella, whose middle name is Margalita. It’s a fun name for a fun product.’

The Bad Boys Life star expressed one of the inspirations behind the margarita cocktail was that, ‘It’s so hard to find a really good, consistent, premium, quality craft cocktail in a can or a bottle, so that was something we were really excited about producing.’

‘With Thomas Ashbourne, you know you’re going to get the same quality every single time. It’s something you can count on.’ The tasty margarita drink can be purchased at around $44 for two 375ml bottles, and goes up to around $60 for the canned version.

Although Rosario wasn’t present at the event on Sunday, Vanessa and Ashley appeared to have a blast in celebration of their milestone collaboration. 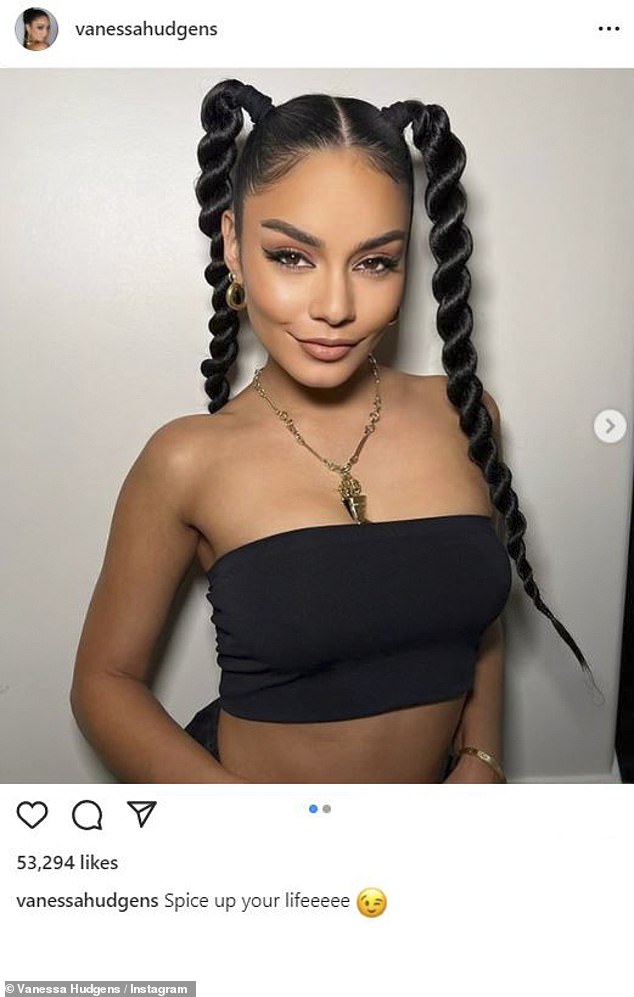 Ready for the party: Vanessa shared a glimpse of her outfit on Instagram, writing the caption, ‘Spice up your lifeeeee’