Vauxhall reaches for the stars with the new Astra: We've driven it

Vauxhall really is reaching for the stars with its new and much improved Astra hatchback.

I should know, because I’ve just been driving one of the new eighth-generation Astras for the first time on UK roads.

‘Per Ardua ad Astra’ – through adversity to the stars – has since its foundation been the Latin motto of the UK’s Royal Air Force. Well Vauxhall, over the years, has also been through its fair share of troubles and adversity. But now, like the RAF, it too is aiming high and has really taken off with its important new Astra hatchback. And it is a bit of a star. 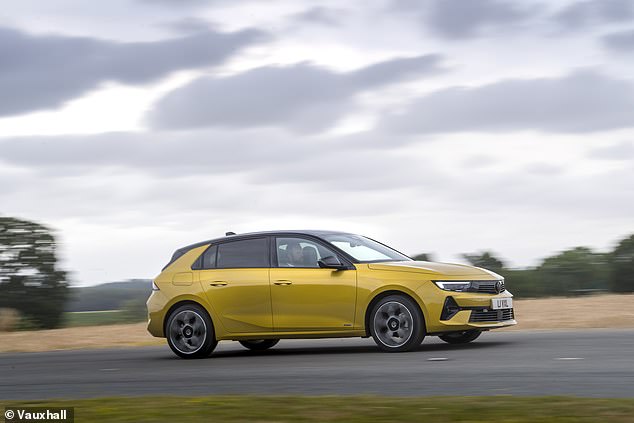 So Stellantis are providing Vauxhall with a sparkling new wardrobe and a dose of renewed confidence to ensure that Astra and its siblings WILL go to the Ball. And to that end, the Astra is also gaining from the in-house Stellantis range of new engines and electrified technology, as well as an injection of contemporary style, inside and out.

Under the eye of Brit design director Mark Adams, new styling has been significantly sharpened up so that first impression of the Astra is of a bold, eye-catching, low-slung hatchback with a distinctive new elongated v-shaped ‘vizor’ front grille and headlight combination showcasing a newly designed Vauxhall griffin badge. And it’s working.

My car definitely was getting admiring glances and double-take head-turns from passers-by and other motorists. Yes, it really is a Vauxhall. And it’s come a long way since the first generation Astra was launched 43 years ago in 1979 – just as Margaret Thatcher was becoming the UK’s first woman Prime Minister.

There are three powertrain options: a plug-in hybrid petrol, pure petrol and a turbo-diesel.

I was driving the frugal but satisfyingly nippy plug-in hybrid-e or PHEV version of the new Astra in a bold, stand-out but fetching electric yellow paint with a black roof and dark tinted rear windows, in the top of the range Ultimate trim level. 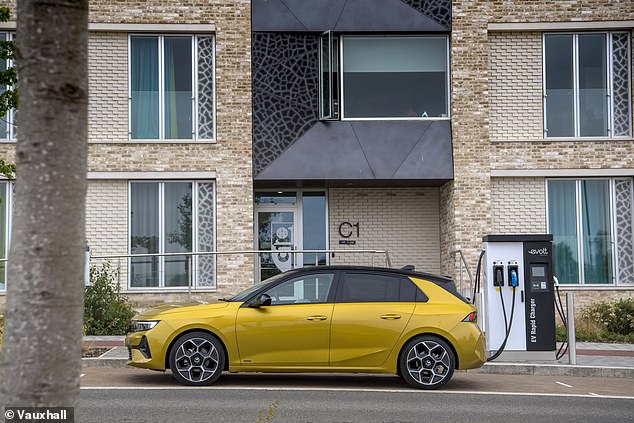 The model we’ve been testing is one of the plug-in hybrid variants, which offers over 40 miles in electric-only mode 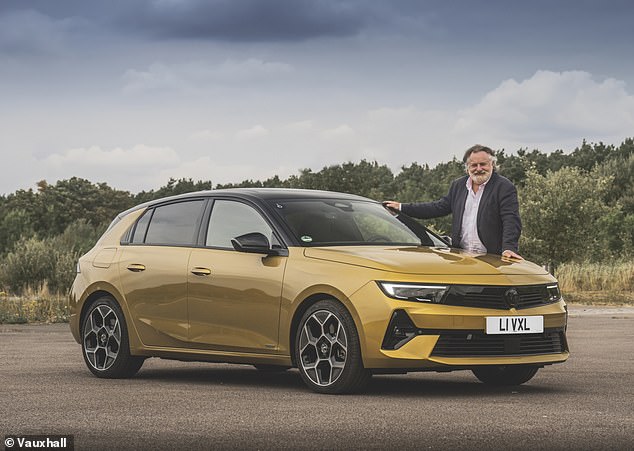 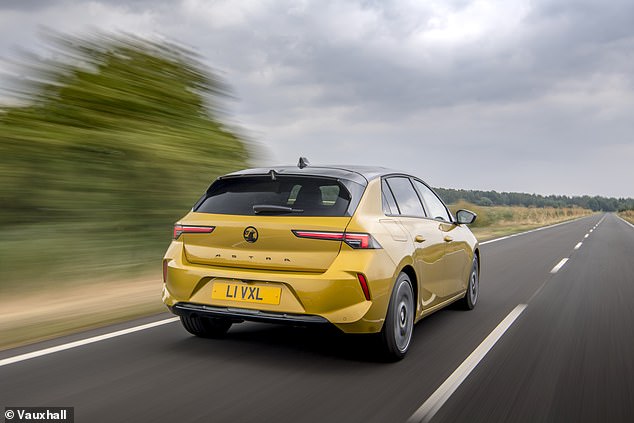 The other two trims are entry-level Design and mid-range GS Line, expected to be the biggest seller accounting for 65 per cent of sales.

Lower (by 44mm), sleeker, wider, and with a longer wheelbase (+13mm) than its predecessor, it exudes modern sportiness.

Plug-in hybrid models, available starting from the mid-level GS Line trim level, are priced from £32,700, while the full Astra range starts from £24,315 for the 1.2-litre 110 horse-power six-speed manual in entry-level Design trim.

The plug-in hybrid combines a 150 horsepower 1.6-litre four-cylinder turbo petrol engine with an 81kW electric motor and a 12.4kWh lithium-ion battery to produce a combined 180 horsepower which, linked to an eight-speed automatic gearbox, propels the new Astra from rest to 60mph in a sprightly 7.7 seconds up to a top speed of 144mph.

It will cover 43 miles in electric-only mode up to a top speed on battery-power of 88mph.

Charging takes under two hours with the optional with 7kWh on board charger (3.7kW is standard). 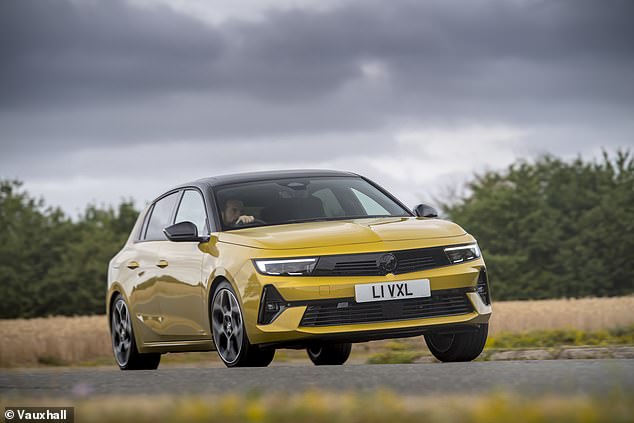 The Astra has new sharpened styling. It is a bold, eye-catching, low-slung hatchback with a distinctive new elongated v-shaped ‘vizor’ front grille and headlight combination 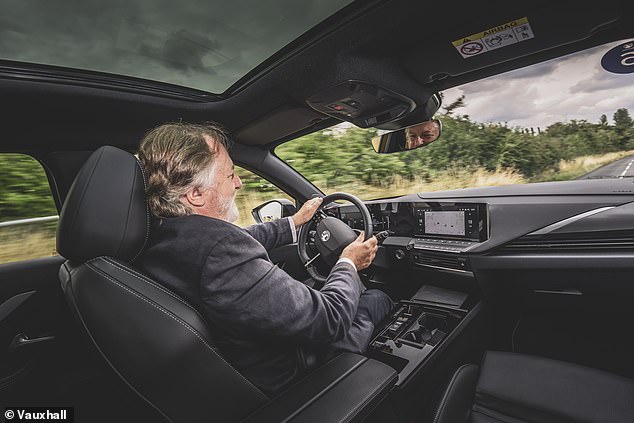 Our test car is one of the first new-generation Astras to land in the UK, which is why it is a left-hooker rather than right-hand-drive 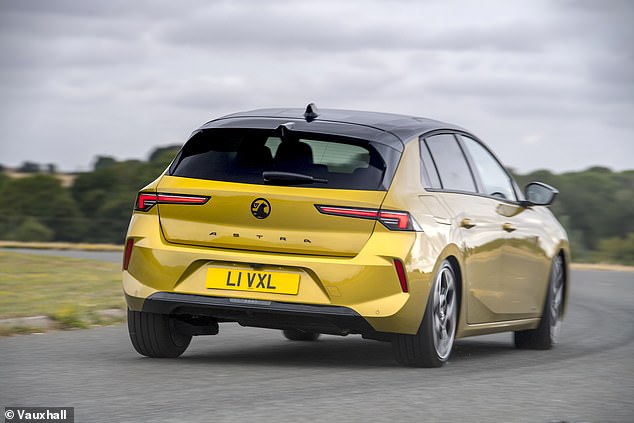 The Astra is an engaging drive out on main highways and country lanes. Importantly, it also looks the business. It enhances any driveway

Provided you keep the hybrid’s battery regularly charged, the big cash savings are on the fuel economy of up to 256mpg, with low CO2 emissions of 24-26g/km which means it is also in a low VED tax band, with nothing to pay in the first year, and a standard rate of £155 from the second year onwards.

Electric-only mode is smooth, quiet but with spirit.

I actually heard one father say to his young son as I passed at slow crawl: ‘That’s an electric car.’ Almost. But I was in electric mode.

The Astra is an engaging drive out on main highways and country lanes. Importantly, it also looks the business. It enhances any driveway.

Vauxhall may be edging towards the value for money brand for Stellantis, but the Astra does not look cheap and it performs well.

Exterior sound noise is kept at bay thanks to soundproofing from acoustic glazing and extra door and boot seals.

And if imitation is the sincerest form of flattery, then Vauxhall has given a back-handed compliment to German arch-rivals Volkswagen by using the restyled circular Griffin badge on the boot to be a disguised flip button with which to open the rear hatch. Wonder if that might spark a legal challenge from VW? Nothing so far, says Vauxhall. Was that a cheeky wink? 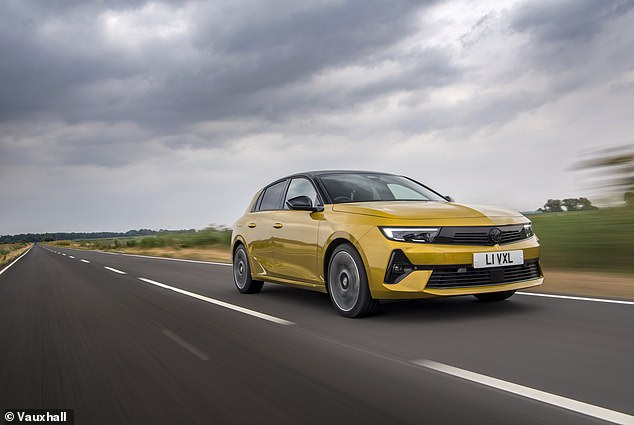 Vauxhall may be edging towards the value for money brand for Stellantis, but the Astra does not look cheap and it performs well 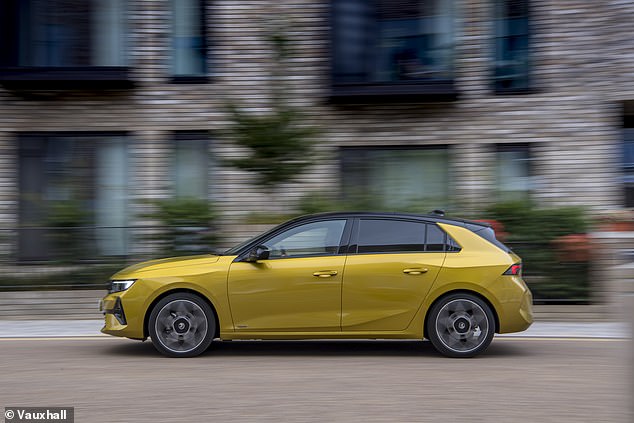 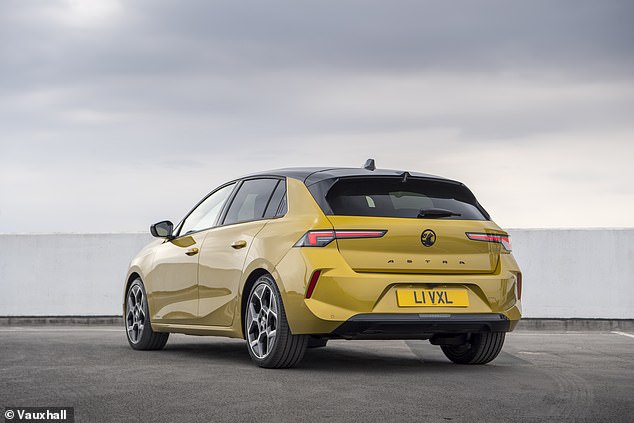 The plug-in hybrid combines a 150 horsepower 1.6-litre four-cylinder turbo petrol engine with an 81kW electric motor and a 12.4kWh lithium-ion battery to produce a combined 180bhp

One other valuable lesson Vauxhall has learned from VW is not to dispense with physical press-buttons on the Astra’s sweeping dashboard which seamlessly links a 10 inch digital touchscreen with a 10-inch driver display.

The VW Golf’s button-free digital dashboard – with an intensely fiddly and infuriating touch-slider – has literally driven drivers to distraction. Vauxhall, by contrast, prefers to recognise that motorists are first and foremost human beings, not software nerds. But there is voice recognition control if you preface your command with: ‘Hey Vauxhall’.

To prevent would-be buyers being bamboozled by too much complex choice, Vauxhall has stripped down and simplified the Astra range from a massive 45 to a more manageable 12 model variations. 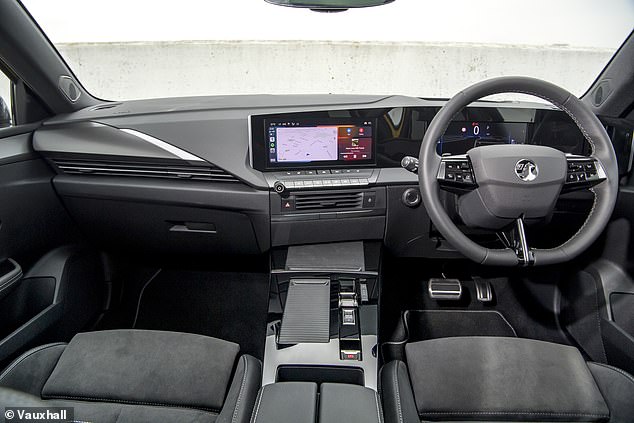 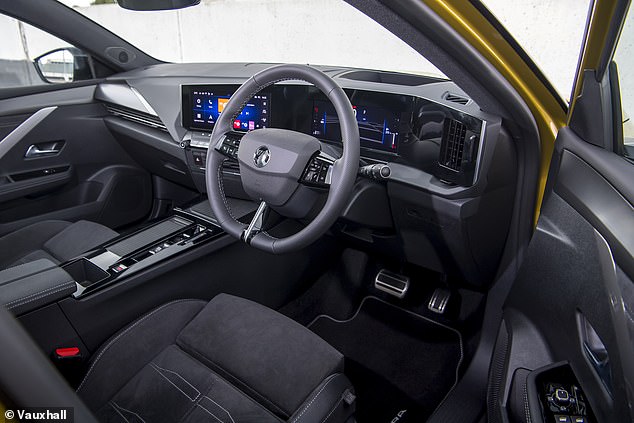 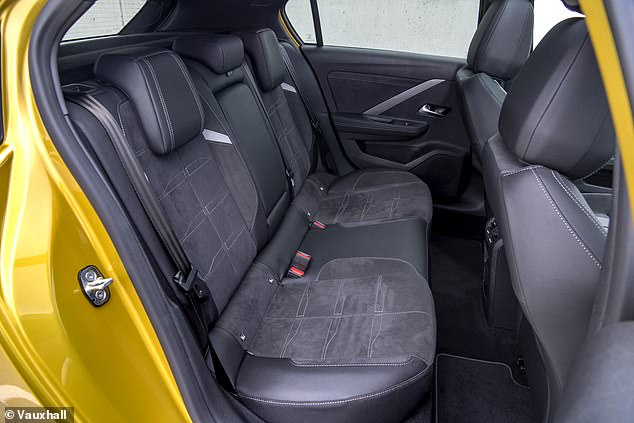 A longer wheelbase means the Astra has more rear legroom than before – welcome news for customers, many of them looking to transport their families 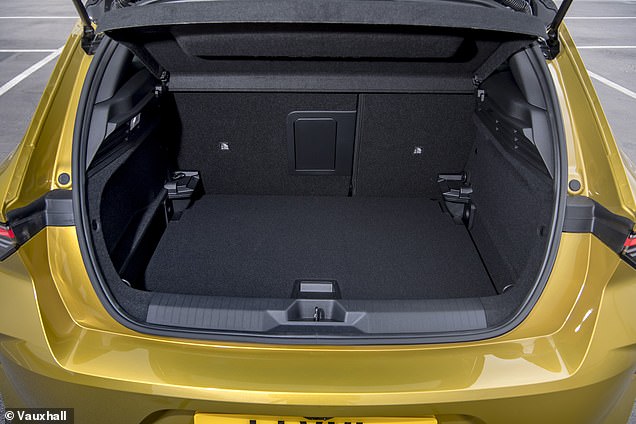 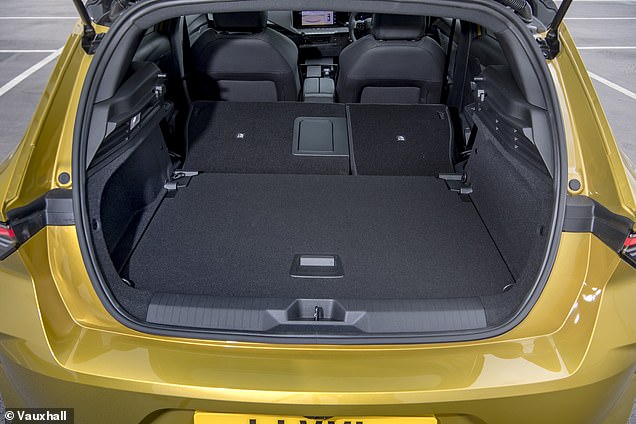 Once you get over that initial raspy thrubbing from initial acceleration of the frugal but highly efficient three-cylinder.

Vauxhall says it will offer an electrified version of every vehicle by 2024, and sell only 100 per cent electric vehicles from 2028.

I must admit to a bit of personal nostalgia. Two of our first family cars were Vauxhall Vivas – and one of those became my very first hand-me-down set of wheels. So it’s good to see Vauxhall getting its mojo back.

Will it fit in my garage? New Vauxhall Astra (8th generation) 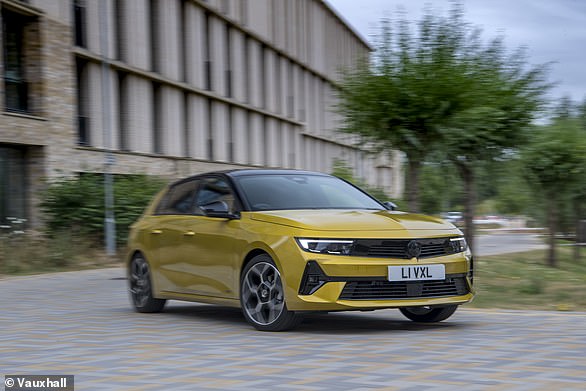 Charging time: Under 2 hours (with 7kWh on board charger)

Options fitted to my car:

– Nappa leather seats including ventilation and massage in front, and heated rear (£2,100)