Shocking reports have emerged over the last two days of mass graves, murdered civilians, rape and execution-style killings resulting in some calling the acts genocide. US President Joe Biden speaking to reporters yesterday stated once again he believed Putin is a war criminal and should be brought to trial.

Speaking exclusively to Express.co.uk, international journalist and writer Hamidreza Zarifinia stated he believed the West should not sit back over actions witnessed in Ukraine, and Putin should face the consequences of war crimes.

Mr Zarifinia said: “The world should not allow Russia to continue these aggressions and genocides in Ukraine, and today the world is responsible for Russia’s criminal actions to prevent the killing of innocent civilians.

“Silence in the face of Putin’s inhumane behaviour is complicity in the crime and will make it commonplace in the world.

“Thus, indifference and silence in the face of oppression, for whatever reason, are seen as a seal of approval for Putin’s oppressive actions and methods, and make him even more brazen.” 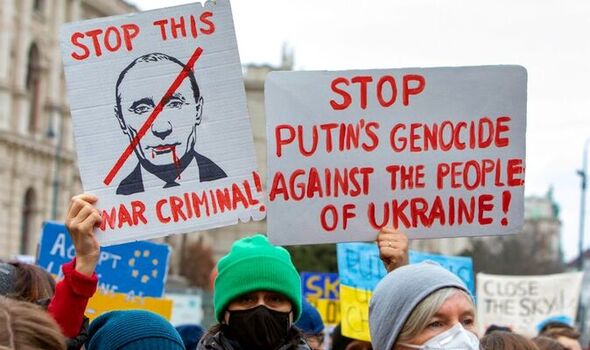 Speaking of the deplorable scenes emanating from Bucha, Mr Zarifinia said the pictures were “an incurable wound and a repeat of the 1995 Srebrenica genocide.”

The journalist stressed the need for evidence to be gathered surrounding multiple allegations of war crimes by Russian forces in Ukraine.

He said: “The shelling of Ukrainian cities by Russia, from Kyiv to Mariupol and elsewhere, justifies the struggle to establish institutions for collection and documentation, and ultimately the immediate prosecution of Vladimir Putin for war crimes and crimes against humanity.

“If a trial is postponed, the death toll appears to be rising every day, with European and Western countries blamed for financial support for Ukraine’s war with Putin, as Russia exports $ 1 billion a day in energy.”

READ MORE:
EXCLUSIVE: British soldiers explain why they are fighting in Ukraine

The writer, who himself recently returned from reporting in Ukraine stated international bodies should also be involved in the collection of evidence.

Mr Zarifinia said: “The conflict has driven institutions to collect, document, and prosecute Putin’s war crimes and crimes against humanity, and this is a great test for the international community and the International Criminal Court, which claims to ensure lasting justice and security in the world.

“The UN Security Council has set up missions to gather evidence of crimes.
“The International Criminal Court in The Hague has launched an investigation into serious crimes in Ukraine and is preparing to try Russian perpetrators in their courts.”

However, he warned Russia’s privileged position in the UNSC may pose a problem

He continued: “It should be noted Russia is one of the five permanent members of the Security Council and can “veto” any proposal to prevent it from joining the UN Security Council.”

Karim Khan, the Prosecutor General of the International Criminal Court, had previously said: “There is a reasonable basis to believe war crimes were committed in Ukraine.”

Using this basis, Mr Zarifinia said: “With the available evidence, prosecutors and judges of the International Criminal Court can issue arrest warrants for the trial of defendants, including Putin, in The Hague.

“The killing of Bucha civilians leaves no doubt Putin’s genocide is proven.

“The effectiveness of the International Criminal Court and the practical implementation of international law depend not only on treaties but also on politics and diplomacy, and the solution, like Nuremberg, once again lies in international diplomacy and consensus.

Should Vladimir Putin be put on trial for war crimes? Why are world leaders taking so long to react? How can such crimes happen again after lessons learned in the past? Let us know what you think by CLICKING HERE and joining the conversation in our comments section below – Every Voice Matters!

Ukraine has appealed to the ICC to bring Putin to trial (Image: Getty)

He concluded: “In the face of Putin’s blatant crimes in killing more than 410 civilians in Bucha and other parts of Ukraine, the people of the world must call on their governments to refrain from importing energy from the Russian government.

“The world must rise up against this injustice, given Putin’s repeated attacks on Ukraine. Governments and nations around the world must jointly wear the boots of repression to uphold the fundamental rights of the innocent people of Ukraine.

“It should be noted in the event of a delay in the trial of the criminal Putin, the number of deaths is increasing every day, and if the war continues, history will see a repeat of the brutal massacre of Srebrenica, and these crimes are a clear example of crimes against humanity and genocide.”