The Russian President is facing a fight to save his face as the first glimmer of hope of an end to the conflict in Ukraine appears. Ukrainian President Volodymyr Zelensky said on Wednesday that peace talks with Russia are becoming “more realistic”, but added that there is still work to be done. He said: “The meetings continue, and, I am informed, the positions during the negotiations already sound more realistic. But time is still needed for the decisions to be in the interests of Ukraine.”

Ultimately, anything but a declaration of victory would be considered a failure for Putin, as parts of the Russian population begin to turn against him.

Putin is frequently labelled a ‘narcissist’ by many of the world’s politicians and political commentators.

This label, according to psychotherapist Joseph Burgo, might actually offer a deeper insight into the man whose shocking invasion of Ukraine has cost thousands of lives already.

Mr Burgo, author of ‘The Narcissist You Know’ and ‘Why Do I Do That?’ among others, wrote in The Atlantic in 2014 that narcissism is a “severe psychological disorder that always takes root in childhood, where family life is marked by trauma and emotional chaos.

“When his earliest experiences drastically depart from what is normal or expectable, a child grows up with a painful feeling of internal defect.

READ MORE :Putin will be ‘UNDERMINED’ as ‘money talks’ on oil and gas 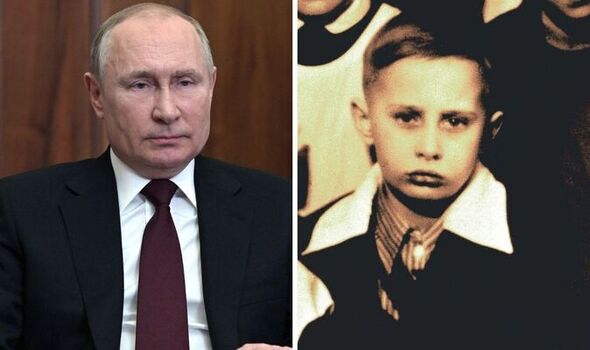 Putin grew up in Leningrad, just after the brutal siege. (Image: GETTY)

“He comes to feel that there is something damaged and shameful about himself, an ‘ugliness’ that must be concealed.”

As a result, he develops a “defensive identity to his unconscious shame” and proves to himself and to others that he is, in fact, a winner.

Putin’s childhood is reportedly similar to what one might expect from a narcissist.

Putin was born in Leningrad (modern day St Petersburg) in 1952, eight years after a brutal attack on the city had left it in disarray and claimed more than a million lives.

Both his parents had survived the siege, but his father was severely disabled from injuries sustained in battle, and his mother had almost died from starvation.

They had already lost one son during infancy several years before World War 2 began, and their second son had died in an orphanage shortly after it ended.

Mr Burgo wrote: “Vladimir was born into this atmosphere of hunger, disability and profound grief.”

Masha Gessen, Mr Burgo said, paints a “grim picture” of Putin’s childhood in her 2013 biography of the Russian President.

Mr Burgo added the complex in which the Putin family lived was typical of the port city during the post-war years.

“Families piled on top of the other, sharing and fighting over a communal kitchen in the hallway.”

Ms Gessen said Putin’s father worked in a factory, and his mother carried out a number of “backbreaking” jobs in a desperate attempt simply to survive.

Childcare was almost non-existent, so Putin spent “an increasingly large part of his time in the communal courtyard below, a space dominated by drunken thugs, cursing, and fistfights”.

Vladimir Putin rides a horse during his vacation outside the town of Kyzyl in Southern Siberia. (Image: GETTY)

Mr Burgo’s research had found that many prominent figures displaying narcissistic personality disorders had been childhood bullies, and may also have been bullied by others.

He wrote: “Though younger and smaller than many of them, Putin fought back against the courtyard thugs and became something of a bully himself.

“With an explosive temper and thin skin, Putin regularly took offence, instantly lashing out with violence.”

His desire to reunite former Soviet republics could be explained as a response to the “dispersal of ethnic Russians in Eastern Europe” following the collapse of the USSR.

Likewise, the action man-esque photographs of him topless on a horse might be explained by some as a “symptom of grandiose self-image”.

However, Mr Burgo suggested: “Maybe he just took his shirt off because it was hot that day.”

Nonetheless, Mr Burgo said: “Putin may or may not be a clinical narcissist, but it may be wise just to treat him like one either way.”