In what appears to be a sign that the EU is missing the UK, photos from within the European Parliament show various MEPs holding out a banner with the words printed on it. The news comes as the UK becomes the focus of attention across the bloc as a series of high profile events have brought the political infrastructure of the country into the spotlight.

Taking to Twitter to reach out to Britons, the German Vice-President for the Greens EFA was very open in her message.

Terry Reintke said: “I have to admit: It has been very hard to watch what has been happening in the UK – especially in the last months.

“So I thought it would be nice to send over some love and strength.

“There are still so many of us who truly miss you.”

Ms Reintke ended her tweet with emojis of an EU flag, a heart and a Union Jack. 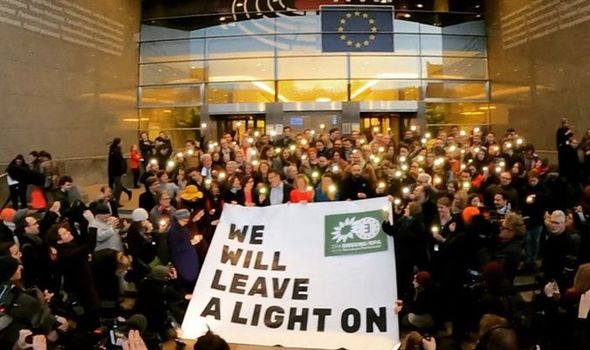 “Leave a Light On” adorned a banner in the EU (Image: Twitter)

In typical British sense of humour fashion, one commentator replied to Ms Reintke with a witty: “Leaving a light on is not very green.”

However, of the many hundreds of replies to the MEP, none showed any support for Brexit, with the vast majority thanking the politician for EU support.

Many even claim they were brought to tears by the gesture.

Others left artwork depicting a UK return to the EU.

For many in Britain, which voted for Brexit in a democratic referendum, the notion of returning to the bloc is seen as impossible.

READ MORE:
Now they thank us! EU gloats Brexit ‘turns out to be advantage’

One reply to the MEP said the UK will be back (Image: Twitter)

Britain voted in a democratic referendum to leave the EU (Image: Getty)

Since leaving the bloc, post-Brexit Britain has seen a string of victories for the nation that would not have been deemed possible under strict EU bureaucracy and rules.

Get Britain Out stated: “The UK is a global trading power, currently exporting more to the rest of the world than it does to the EU. We are the world’s sixth-largest economy, on course to become the largest economy in Europe by 2035.”

It added: “The EU’s share of the world’s economy is in decline. In 1980, the European Economic Community (the EEC as it was then known) accounted for 30 percent of global output. By 2015 this had already shrunk to 16.5 percent according to the International Monetary Fund (IMF).

“Prior to Brexit, all the UK’s trade deals legally had to be negotiated by the EU, which on average took twice as long as independent countries to negotiate and finalise deals.

“With the UK now outside of the EU we have already signed over 70 trade agreements with countries including Australia, Japan and Israel.”

The information published by the group suggests that economically, Britain are better off outside the bloc.

Since leaving, a host of other member states have considered their place within the EU.

Poland challenged the EU’s power over its legal sovereignty, sparking the term, Polexit.

France has also seen multiple politicians become disillusioned with Brussels, with some even praising Boris Johnson and Brexit, coining the term Frexit.

Groups in the Republic of Ireland have also raised concerns about remaining in the bloc, with Irexit also a familiar term.

Further afield, many Eastern European nations have expressed concerns about equality within the trading bloc.

Comments suggesting that Western Europe is being treated more favourably in terms of socio-economic and political sway from Brussels also show huge division of opinion.

For Germany, often seen as the economic backbone of the EU, a recent complaint about the fiscal policies of the EU, along with Spain, also shows that opinions are split in the bloc surrounding bureaucracy and red tape.

The EU is also undecided on its Eastern front, in particular over the ongoing crisis in Ukraine, as well as the mismanagement of migrants arriving, causing a surge in populist and far-right groups across the bloc.

For Britain, it appears that the light shining from within is far brighter, and hence the dimming light extended from Brussels is fading fast.

Cher is 76! The singing sensation is showered with happy birthday tributes from Melanie Griffith