'We will win this!' Hero general feared by Putin says Russia will be driven out of Ukraine

Brig-Gen Giorgi Kalandadze was declared a national hero in his native Georgia after leading the defence against Russia’s invasion in 2008. A graduate of the tough US Airborne and Ranger training schools, he was just 32 when he was appointed head of Georgia’s armed forces.Forced into exile in 2012 when the Russian-leaning Georgian Dream party took power, he went to Ukraine where he went on to lead Ukrainian troops fighting Russian forces in the separatist Donbas region. So grateful was President Volodymyr Zelenskyj for his “outstanding services to Ukraine” that he handed him Ukrainian citizenship.

Speaking last night the 41-year-old old – who remains one of Vladimir Putin’s number one targets – told how he had spent the last five weeks galvanising forces to mount a frantic defence West of Kyiv which prevented Russian forces from achieving their objectives.

“Among other things, I was involved in the tactical battle group which defended Zhuliany International Airport,“ said the exhausted general.

“We prevailed. Now I am being redeployed to where I will be needed the most.

“We will win this war. We will drive all Russian forces out of Ukraine.”

But Kalandadze, who also specialises in counter-insurgency training, was almost forced to sit out the Ukraine war after German bureaucrats honoured a Russian-inspired arrest warrant for trumped-up charges.

In January the Sunday Express reported how he had been arrested at Berlin-Brandenburg Airport following a visit to see his daughter, when authorities in Tbilisi asked Germany to extradite him for allegedly torturing a terrorist suspect together with the former defence minister and two other high-ranking military officers.

It was the second time Georgia had tried to indict him on false charges.

Despite Interpol classifying the case as “predominantly political in nature” and refusing to issue a Red Notice, however, Germany’s justice minister Dr Marco Buschmann sanctioned the warrant and extradition hearing. 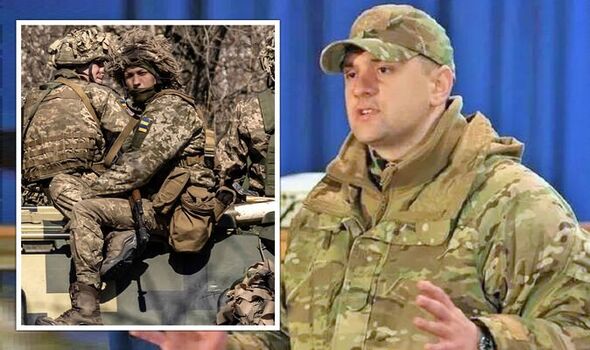 Brig-Gen Giorgi Kalandadze was declared a national hero in his native Georgia (Image: )

Kalandadze, dubbed the “Lion of Georgia”, languished for weeks in Cottbus prison as Russian troops continued to amass around Ukraine’s border, before finally being released on bail in January with no passport.

Upon his release from prison, he told the Sunday Express: “It is clear to me that I have been placed on a Russian hunting list.

“I have travelled extensively across Europe since being granted Ukrainian citizenship – including, on numerous occasions, to Germany, where my daughter lives – and have never been stopped before.

“But now suddenly I am arrested by police at Berlin airport, just two days after giving my interview. You can join the dots. “

Former Georgian President Mikheil Saakashvili, who is currently behind bars in Georgia, called Kalandadze “ a hero of the 2008 war” and claimed Georgia’s Russian leaning government was causing problems for “Russia’s main enemies” around the world.

Kalandadze, dubbed the ‘Lion of Georgia’, languished for weeks in Cottbus prison (Image: )

Former Danish PM Anders Rasmussen, who was Nato secretary general during the first failed attempt to arrest Kalandadze in 2013 – which sae Kalandadze falsely accused of having insulted and beaten several soldiers and abusing his position – branded the move “politically motivated”.

Yet, despite the subsequent discovery by German officials that one witness had been coerced into giving false testimony, the pleas remained ignored.

Kalandadze could only watch in frustration from his Berlin hotel room, worried about the soldiers under his command, as Russian troops poured across Ukraine’s borders on February 24. Even new Chancellor Olaf Scholz’ announcement of an “epochal change” in Germany’s foreign policy to boost defence spending did not free him.

It was only through the actions of public prosecutors in Brandenburg that the case was dropped.

Sources familiar with the case last night revealed that this was due , in part, to the Sunday Express article which revealed hitherto unknown details and piled on intentional pressure.

Furthermore, a witness contacted him to say he would testify that he had been tortured to give false testimony against Kalandadze in relation to the original charges.

Aware of inconsistencies, the prosecutor wrote to the new Government four times for guidance but received no reply.

On March 2, before a court case had been officially dismissed, the prosecutor handed Kalandadze back his passport, telling him to go and fight for Ukraine. The general immediately drove to Ukraine through Hungary to take command of his troops once more.

Speaking last night, Nathalie Vogel, of the European Values Centre for Security Policy think tank, said: “It is obvious that his arrest warrant was initiated by Russia. Moscow has been after Kalandadze for years.

“It is a horrendous indictment of Germany’s new government, which decided to pursue a politically-motivated decision to appease Russia even as its troops were poised to invade.”

She added: “The Sunday Express’ article had made this an international issue. Feeling the pressure, he decided to give Kalandadze back his passport even though the court case had not officially been dismissed.”

Referring to Germany’s continued reluctance to supply heavy arms to Ukraine, she added: ‘“Sadly, Germany’s foreign policy towards Russia remains characterised by the German expression: ‘if you don’t know where you’re going, any path will take you there’.”