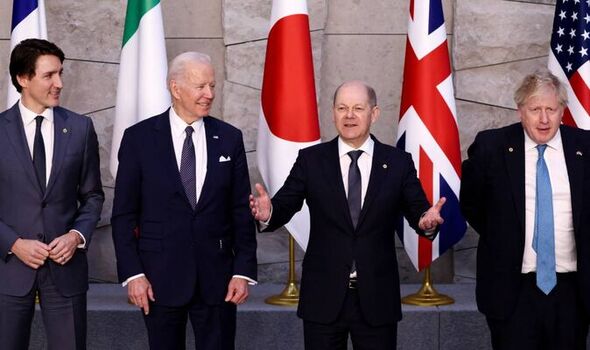 After meeting fellow world leaders at a Nato summit in Brussels yesterday, the Prime Minister said the use of weapons of mass destruction in the conflict would be “viewed with horror” around the world.

He promised the UK and its allies will “ramp up” weapons supplies to help Ukraine’s stubborn resistance against the “inhuman and barbaric” Russian invasion.

It came as Nato agreed to send 40,000 troops to countries bordering Russia, while the UK agreed to increase support.

Mr Johnson said kit would be provided “in the quantity and with the quality” needed by President Volodymyr Zelensky and his forces to defend against their “bullying neighbour”.

An extra 6,000 missiles and £25million in funding has been pledged by the UK. The PM added: “We must support a free and democratic Ukraine in the long term. This is a fellow European democracy, fighting a war of national defence.

Mr Biden also warned the Western Alliance that Russia could use “false flags” about Ukraine looking to use chemical weapons as a precursor to unleashing its own.

While Mr Johnson said: “There is a visceral horror of the use of these weapons of mass destruction. If Putin were to engage in anything like that, the consequences would be very, very severe. It would be catastrophic for him if he were to do that and I think that he understands that.”

The PM added that Nato would “ramp up lethal aid to Ukraine” to resist the Kremlin killers. He said: “We will not stand by while Putin vents his fury on Ukraine.”

“We will not stand by while Putin vents his fury on Ukraine” (Image: PA Images)

Mr Johnson fears Putin is not interested in negotiating a ceasefire in peace talks.

In a BBC Newsnight interview last night, he warned that the Russian despot looks set to double down and “Groznyfy” Ukraine’s great cities, in reference to the capital of Chechnya, which was destroyed in 1999.

He said it would be a “tragedy” and added: “Everybody wants peace. If this could be solved it would be fantastic. I’m not optimistic Vladimir Putin really wants that.

“He’s decided to double down and to try to Groznyfy the great cities of Ukraine in the way that he’s always tried to do. That’s a tragic mistake.”

Despite the atrocities being committed in cities such as besieged Mariupol, the PM made it clear no Western countries will want to put “boots on the ground” or impose a no-fly zone.

Jens Stoltenberg: Russia is trying to create some kind of pretext to use chemical weapons (Image: PA Images)

He said: “What we are doing is steadily ratcheting up the movement of lethal but defensive weaponry to Ukraine. That is growing in volume the whole time.”

He admitted it was “difficult” to meet Mr Zelensky’s requests for tanks and warplanes to resist the invaders and added: “We are looking at what we can do to help.

Nato is stepping up other measures, however, including detection equipment, protection, medical supplies and training for decontamination and “crisis management”.

Nato Secretary General Jens Stoltenberg said: “We agreed to do more including cyber-security assistance and equipment to help protect against biological, chemical, radiological and nuclear threats.”

The Western Alliance also announced four new multinational battalions of up to 40,000 troops to go to Slovakia, Hungary, Poland and Bulgaria.

Mr Stoltenberg added: “We are concerned, partly because we see the rhetoric. We see that Russia is trying to create some kind of pretext – accusing Ukraine, the US, Nato allies – for preparing to use chemical and biological weapons.”

ONE MONTH OF THE RUSSIAN INVASION: Zelenskyy addresses the nation from the streets of Kyiv (Image: PA Images)

It said: “We call on all states, including the People’s Republic of China (PRC), to uphold the international order, including principles of sovereignty and territorial integrity, to abstain from supporting Russia’s war effort in any way and to refrain from any action that helps Russia circumvent sanctions.

“We are concerned by recent comments by PRC officials and call on China to cease amplifying the Kremlin’s false narratives and to promote a peaceful resolution.”

Mr Johnson asked allies including President Emmanuel Macron of France to question whether they have done enough to support Ukraine. He told them: “We all want Putin to come to his senses, put his tanks into reverse. [But] he’s going to grind on.”

“He’s already crossed the red line into barbarism. The heroism of the Ukrainians has fundamentally changed the geopolitics of Europe. People will ask, did we do enough?

“I don’t think we can deny them in their moment of agony. We have the means and they have need.”

The Prime Minister also rebuked Moscow for calling him the most “anti-Russian” leader. He said: “It’s very, very important to understand there isn’t a single person round the G7 table against the Russian people. I am the only Prime Minister in UK history to be called Boris. I’m not remotely anti-Russian.”

The US has announced new sanctions on more than 400 individuals and entities, including some 300 members of the Russian Duma, oligarchs and defence companies.

President Biden said they are key to turning the screw on Putin and he saluted Nato’s unity.

He said: “The single most important thing is to stay unified and for the world to focus on what a brute he is. Putin was banking on Nato being split. Nato has never been more united than today.”

WHAT WEAPONS THE UK IS SENDING TO UKRAINE

WITH Russia’s invasion faltering, it is tempting to consider whether Putin might be looking for a diplomatic way out in the latest rounds of peace talks.

But while the gains that would satisfy Putin’s ego – Ukrainian neutrality, the recognition of Russian control of Crimea and the independence of the two easternmost Ukrainian areas – are clear, it is hard to see how he will be rewarded after starting a war with zero justification.

The neutrality point is easily conceded as there is no prospect of Ukraine joining Nato while the status of Crimea and the conflict in the east remained unsolved. But losing territory taken by force is another matter. Ukraine’s President Zelensky has already suggested such a controversial move would need to be approved by referendum.

What would deliver that support would be some Ukrainian gains in the form of binding Nato security guarantees, or Russian acceptance of future Ukrainian EU membership. And Ukraine will need compensation for the hideous loss of life and infrastructure suffered.

If visible atrocities, huge military losses and an economy in freefall finally focus Putin’s mind, perhaps both sides will come to terms and end the war. But until then, peace-making progress is unlikely.