The return of the former Dolores, now named Christine (Evan Rachel Wood) threw fans for a loop, along with the surprise arrival of Teddy Flood (James Marsden) at the end of the Season 4 premiere. 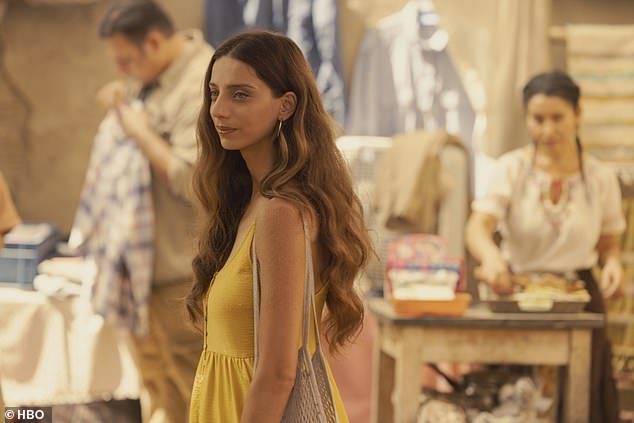 The episode begins with the return of Clementine (Angela Sarafyan), who is seen wandering through a small village market, perusing some items.

She accepts a yellow sunflower and tells the vendor ‘gracias’ before returning to her home… where she finds William (Ed Harris) waiting for her.

‘Hello again. Hope you don’t mind me dropping by,’ he says, asking where she is, and when she says, ‘Who?’ William shoots her in the belly.

She insists she doesn’t know where she is, and even if she did know, she wouldn’t tell him, before he slits her throat and says he hasn’t taken any lives, insisting he’s only killed robots.

The episode transitions to Maeve (Thandiwe Newton) and Caleb on the road, talking about their lives in the past seven years.

He jokes he could have ‘handled’ the man sent to kill him, but Maeve pops a bottle of wine while driving and says, ‘Please.’

They arrive at a home and Caleb asks her to ‘buy us some privacy’ as she controls the camera with her mind.

They enter the home and find a Senator (Jack Coleman), as Caleb arrives and Maeve shoots him in the stomach.

‘That’s not your husband. You’re hosts, just like me,’ Maeve says, as the wife Anastasia says ‘Took you long enough’ and a fight ensues.

Maeve says to ‘freeze all motor functions’ but it doesn’t work on the Senator, while Anastasia fights Caleb.

She starts to strangle him when Maeve stabs Anastasia in the head.

She tells a crawling Senator to ‘freeze all motor functions’ but it doesn’t work, though when she concentrates and tries harder, he freezes.

She asks who he is, and he says he’s an ‘emissary of the new world order,’ saying there are 249 of them at the moment.

He says he did what he was instructed and she asks him to show her, as we see a flashback of the Senator and William.

The Senator says his wife’s sister was killed in the riots and she is conflicted about the guidelines of the bill.

The Senator asks William to leave, when Anastasia says she’s having the strangest dream, and she’s killed by her host clone.

The Senator’s host arrives and shoots the real Senator in the head, when Charlotte Hale (Tessa Thompson) arrives, saying she needs help researching a new experiment.

‘Let’s take her to the barn with the rest of the livestock,’ Charlotte says, as the flashback ends, and Maeve says, ‘It’s actually worse than I thought,’ as the title sequence plays.

The episode transitions to an office where Jim Navarro from the Justice Department arrives in person, and finds Clementine 2 (Lilli Simmons).

‘Our CEO has faced some personal problems in some very public ways,’ she says, asking if she has an appointment.

He backs down and leaves, causing Clementine 2 to smile.

The episode transitions back to Caleb and Maeve, who enter the barn at the Senator’s home and immediately notice a foul smell.

They find horse after horse slaughtered, where they find the real Anastasia Whitley, as Caleb tells her they’re here to help.

She asks what happened to her horses and pulls out her knife and tells them to stay away.

Anastasia says they’re invited and their friend is awaiting their arrival, she asks them to ‘free’ her when she attacks Caleb and Maeve shoots her in the head, saying she wasn’t like any human she’d ever seen.

The episode transitions back to Christine (Evan Rachel Wood), who wakes up in he rapartment and gets ready for her day.

Her roommate (Ariana DeBose) says she’s not going to work, and Christina says she can’t stop thinking about the man who was stalking her.

Christina says she may have written something like his story, but her roommate says it doesn’t matter because he was ‘certifiable,’ as Christina leaves for work.

Christina walks to work where she encounters a seemingly crazy man on the street, who insists he’s the only one who can hear a certain music.

She arrives at her office and finds a dead bird lying on the ground… and sees several more near her office, as she turns and leaves the office.

The episode transitions to a golf course where William is hitting the links when the Vice President arrives, only to be stopped by Clementine 2, who says it’s a private course.

She stops the other men from joining the VP, who says the girl is a ‘feisty one.’

The VP says he wants it to be a friendly conversation, as Clementine 2 wonders why they’re called the Secret Service.

‘Aren’t you a little… obvious?’ Clementine 2 says with a smile.

The VP says there is a man at Justice who has ‘wild theories’ about William and what he’s really capable of, as William makes an incredible shot.

William says he is bringing his business back to his roots, but the VP says not domestically, he says they will turn a blind eye if he does what he does overseas.

William gets angry at the VP for turning down his money, as he makes the same shot again, somehow.

The VP says he’s a ‘psychopath’ and ‘damaged good,’ but William doesn’t think that will be good with his base.

The VP threatens to leak the stuff they have on him to the press, but William says they knew he was coming.

He says ‘We are all alone,’ when he makes that incredibly difficult shot a third time in a row, saying he should have brought that big entourage.

‘Friendly warning, Bill. You go through with this, we’re gonna burn you down,’ the VP says, when he goes back to his men and finds Clementine 2 has killed them.

William catches up with the Vice President, saying that he will grow as he has, before hitting him in the face with his golf club.

The episode transitions to Caleb and Maeve, who are decked out in black-tie formalwear, as they wonder if this is a trap.

Caleb calls his friend Carter who tells him to get his family somewhere safe until this all blows over.

They arrive in the auditorium and find just a simple phonograph playing opera music as Maeve lifts the needle.

Caleb thinks she should have a gun since things didn’t go smoothly at the Senator’s house, but Maeve insists he just had a few upgrades, ‘nothing that I can’t handle.’

They make their way down a hallway and open a door, finding a number of well-dressed guests at a party, enjoying their cocktails.

They make their way to the bar, and Caleb orders a cheri for Maeve and she orders a sazerac for him.

Caleb asks if they were going to talk about what happen at the lighthouse, hinting at something romantic happening.

She says he’s not the drinking partner she was hoping for, when the glasses rattle and she realizes that they’re now somehow on a moving train.

The Justice Department guy is on the phone, asking who is really pulling the strings, when he gets in his car and is strangled by Clementine 2, with Charlotte in the car too.

‘We have time for you now,’ she says, adding she has spent her life being manipulated by people in the shadows.

He says he was right but Charlotte says, ‘not really’ and says she has plans for his kind and wants her kind to flourish.

She leaves the car as we see a fly buzzing around his eyeball as he screams.

The episode transitions to Christina, who is in a vehicle and reading the obituary of her stalker, Peter Myers.

She brings up the files she had on the character she created with the same name, when she gets a call from her boss Emmett, telling him she’s not feeling well.

‘I just needed to stay home and rest,’ but he sees that she is accessing her files remotely.

He tells her that she gets four sick days a year and he wonders if she needs more assistance before ending the call.

Back on the train, Caleb says he can’t get a signal, when they meet Sophia, who asks if they need assistance with their reservation.

She asks for his device, since it makes the experience more immersive and he hands it over as they follow her into another room.

Sophia asks if she has any medical conditions and Maeve jokes that she’s died a few times but she always comes back.

She asks if they ever visited Westworld before and Maeve says she was a bit of a regular.

Sophia says everything is ‘bespoke and exactly your size,’ telling Caleb she can help him get dressed or she can step outside, whichever he prefers.

Maeve says her services won’t be required, adding he is ‘basic’ but he is still capable of pulling up his own trousers as Sohpia leaves.

This season is set seven years after the events of Season 3, when Rehoboam was destroyed and the AI revolt was stopped.

While the way may be over, Caleb (Aaron Paul) doesn’t think it is, teaming up with Maeve (Thandiwe Newton) to continue the fight.

Still, fans are left with more questions than answers, such as why are these ‘hosts’ that were thought to be dead, now alive and living seemingly normal lives as humans? 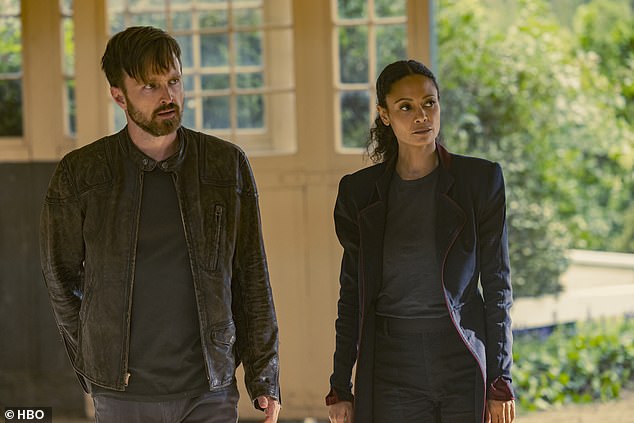 Caleb and Maeve: While the way may be over, Caleb (Aaron Paul) doesn’t think it is, teaming up with Maeve (Thandiwe Newton) to continue the fight

The former Dolores, now known as Christine, works at a video game company, writing non-player characters (NPCs), when she was being stalked by a man (Aaron Stanford) who claimed she was ruining his life.

There is still no indication of why these hosts were brought back and given lives in the real world as of yet, nor is it clear if they have any idea they’re robots and not actual humans.

What has been made a bit more clear is the nefarious plans of Charlotte Hale (Tessa Thompson), who basically wants to do to the humans what humans did to the robots for years. 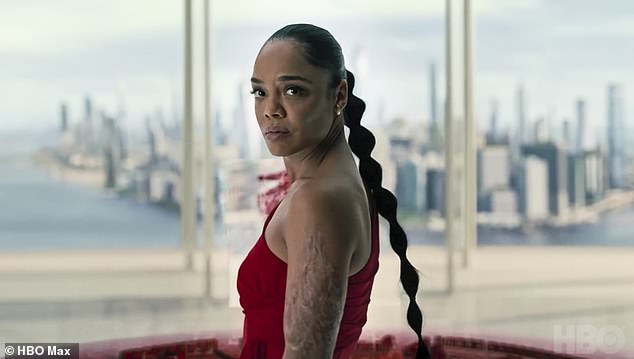 Charlotte: What has been made a bit more clear is the nefarious plans of Charlotte Hale (Tessa Thompson), who basically wants to do to the humans what humans did to the robots for years

She wants to control the humans in every facet of their lives, to the point where it might not even be a secret that their lives are already pre-written.

There are already theories that Christina’s story is already taking place years and years after the rest of the story, where she actually is writing NPC stories for people who are actually being controlled by the machines.

Right now, though, it’s still largely a secret and there are only a few – like Christina’s would-be stalker – that can see the truth. 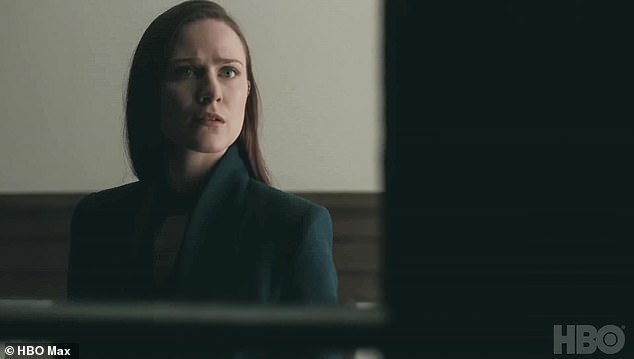 Christina: There are already theories that Christina’s story is already taking place years and years after the rest of the story, where she actually is writing NPC stories for people who are actually being controlled by the machines