The pub operator reported a £24.9million loss in the 53 weeks ending July, against a £146.5million loss the previous year, when Covid-19 restrictions forced its outlets to shut for much of the period.

Earnings were affected by much higher labour costs as the chain raised its hourly salary to above £10 for the first time, and repair bills following the reopening of pubs last year. 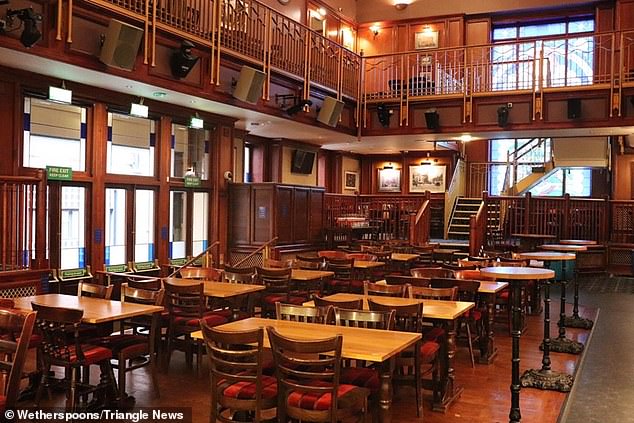 Earnings: JD Wetherspoon reported a £24.9million loss, against a £146.5million loss the previous year, when Covid-19 restrictions forced its outlets to shut for much of the period

Even with comparatively fewer restrictions this time around, trading remained some way behind pre-pandemic volumes despite the company’s overall turnover climbing by around £1billion.

Wetherspoon suggested this may have been the result of difficulties persuading formerly ‘dyed-in-the-wool’ patrons to return as they have become accustomed to drinking beer purchased from supermarkets since the start of the pandemic.

On a like-for-like basis, sales were 4.3 per cent down on 2019 levels due to a weak recovery in food and drink orders, which offset strong demand for hotel rooms and fruit machines.

‘Most commentators, including most publicans, understandably predicted a post-lockdown boom, in which the public would react to enforced cabin fever by embarking on a celebratory spree,’ the company remarked.

‘But the reality has, in contrast, been a painstakingly slow recovery in sales, for some but not all, accompanied by great inflation in costs.’

The FTSE 250 business noted that trading improved over the year; sales were down 7.4 per cent on pre-Covid volumes in the first six months but only 0.6 per cent lower in the fourth quarter. 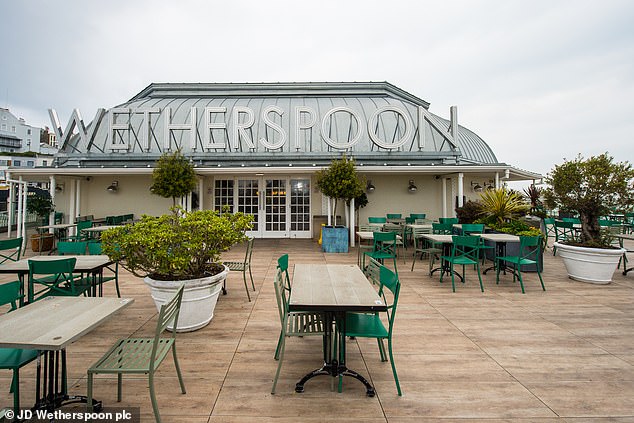 Demand: On a like-for-like basis, Wetherspoon’s sales were 4.3 per cent down on 2019 levels due to a weak recovery in food and drink orders

Like-for-like sales in the first nine weeks of the current financial year were also 10.1 per cent higher on the previous year.

However, the current cost-of-living crisis poses a significant challenge to its immediate performance, with skyrocketing energy bills and interest rate hikes putting a major squeeze on household incomes.

Meanwhile, Tim Martin, chief executive and founder of Wetherspoon, claimed the greatest threat to the hospitality sector if the potential for the return of Covid-related restrictions.

Pubs, bars and restaurants were some of the worst-affected by job losses during the height of the pandemic, having been forced to either shut or were subject to stringent capacity limits.

He said: ‘This competitive disadvantage has had an increasingly debilitating impact on the hospitality industry and will undoubtedly result in long-term financial weakness vis a vis supermarkets – which will also be harmful to employees, the Treasury and the overall economy.’

However, Martin said the company was cautiously optimistic’ about its future prospects, which had been somewhat improved in recent years through measures to boost its finances, such as fixing interest rates until 2031 and implementing two equity raises.

Mark Crouch, an analyst at online trading platform eToro, is less confident of the firm’s prospects, though.

He said: ‘The reality is that Wetherspoons is on course to make only a fourth full-year loss in its history unless there is a dramatic turnaround in its fortunes. Most of that is down to factors outside of its control and affects the entire industry.

‘While Wetherspoons is one of the stronger players, unfortunately we may see an increasing number of pubs call last orders for the last time this winter as the energy and cost-of-living crises really begin to bite.’

Following the release of this trading update, JD Wetherspoon shares rose 10.3 per cent to 482.6p in morning trading, although their value has more than halved in the past year.