INVESTING EXPLAINED: What you need to know about digital assets, which not tangible, but are nevertheless considered to have a value

In this series, we bust the jargon and explain a popular investing term or theme. Here it’s digital assets.

They are assets that are not tangible, but are nevertheless considered to have a value.

The two best-known categories are cryptocurrencies, such as bitcoin and ether, and NFTs (non-fungible tokens).

These can be any digital creation such as a piece of music or a work of art. 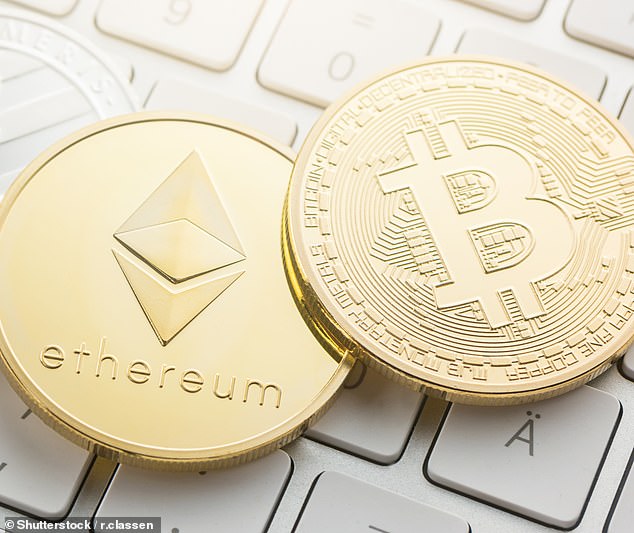 Heating up: Bitcoin is the best-known ‘crypto’, so widely traded that, at the height of the market, this activity consumed as much electricity as Argentina does in a year

Billions have been spent on some art NFTs, some of it through Sotheby’s and other auction houses. They are non-fungible because they are unique and cannot be replaced.

Bitcoin is the best-known ‘crypto’, so widely traded that, at the height of the market, this activity consumed as much electricity as Argentina does in a year.

Blockchain is the ‘distributed ledger’ technology that underpins NFTs and cryptocurrencies. instead of the information on the sale or purchase of a digital asset being held on a single database, it is spread across a network of computers called nodes in a secure and decentralised way.

Yes, to the chagrin of those who gambled with their life savings. In mid-summer, sales of NFTs fell off a cliff. This has not lessened the focus on the potential of digital currencies and blockchain technologies among central banks, financial institutions and governments.

For example, the US Federal Reserve is pondering the introduction of its own digital currency. These are different from cryptos such as bitcoin, which do not have the backing of a central bank.

Crypto prices, which peaked in November last year, have been hit by a number of factors, including the war in Ukraine, higher interest rates and a series of scandals in the sector such as the high-profile failures of US crypto lenders Babel Finance and Celsius Network.

The price of bitcoin may be down by 44 per cent since January, but lately this crypto has recovered some of its losses. Ether is also rebounding to some extent.

The Bored Ape NFTs – pictures of cartoon apes looking bored – were the favourite of celebrities, selling for millions in the autumn of 2021. But the prices of these artworks fell in line with the descent of cryptos.

Why the interest in blockchain?

The system provides a way to make cheap, secure and quick money transfers.

A number of banks, including Santander, already use the Ripple blockchain-based payment network. Ripple’s mission is to ‘build breakthrough crypto solutions for a world without economic borders’.

Fund management groups believe blockchain technologies will be the basis of how funds and shares are traded in future. This month Abrdn became the largest shareholder in Archax, an exchange, brokerage and custodian for digital securities, regulated by the Financial conduct authority.

Stephen Bird, Abrdn’s boss, says blockchain technologies are ‘inevitably going to form a big part of the future of financial markets’. The surge in interest in digital assets can also be seen in the decision by BlackRock, the US manager, to offer a bitcoin fund to its institutional clients.

Is now the time to buy cryptos?

These currencies are only for those who can afford to lose their entire stake and have a taste for speculation.

You would, however, want the people who are managing your money to be backing the most lucrative blockchain projects.