Barack Obama’s latest project is narrating and presenting the new Netflix documentary Our Great National Parks, a five-part series exploring and celebrating the power of earth’s greatest national parks. The 44th president features as an on-camera presenter as well as being the show’s narrator and executive producer.

Production began more than three years ago, accumulating 1,500 days of filming from 33 expeditions in ten countries from Hawaii to Kenya to Indonesia, across five continents each tied to Mr Obama’s biography.

Mr Obama explained the aim of his show to NBC host Al Rocker, saying: “I’m hoping that we’re going to learn something not just about how to maintain national parks, but why it’s so important to deal with issues like climate change that threaten the entire planet.”

The show is a creation of Wild Space Productions in association with Barack and Michelle Obama’s production company Higher Ground Productions, and Freeborne Media.

In 2018, the Obamas’ Higher Ground Productions signed a multi-year deal with Netflix. 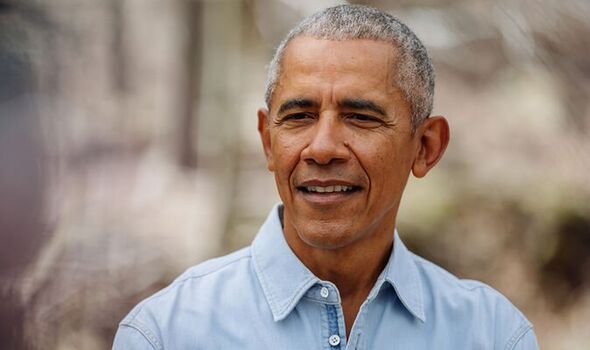 In addition to Our Great National Parks, the couple has produced a range of content including the Oscar-nominated documentary American Factory.

When the deal was signed, Mr Obama said: “One of the simple joys of our time in public service was getting to meet so many fascinating people from all walks of life, and to help them share their experiences with a wider audience.

“That’s why Michelle and I are so excited to partner with Netflix — we hope to cultivate and curate the talented, inspiring, creative voices who are able to promote greater empathy and understanding between peoples, and help them share their stories with the entire world.”

The couple also signed a three-year deal for their Higher Ground Audio company with Spotify in June 2019.

Mr Obama hosted the eight-episode podcast series Renegades: Born in the USA alongside Bruce Springsteen, which premiered in April 2021.

Other podcasts produced by the Obamas include Tell Them, I Am and The Big Hit Show.

Both Mr and Mrs Obama have published memoirs since leaving the White House.

The former FLOTUS signed a record-setting book deal debuting her memoir Becoming in 2018, which sold more than 10 million copies worldwide, making it one of the most successful memoirs ever.

In 2020, the former POTUS published his memoir A Promised Land, which explores his journey to the White House and is expected to be the first of multiple volumes.

Mr Obama made history as the first African American to become US President and during his eight-year term, he reformed US healthcare and unveiled the country’s first-ever climate change strategy.

In his final press conference, he said he did not intend to be actively involved in politics, but did not rule it out completely.

Mr Obama opened his own future presidential centre in Chicago’s South Side in 2021, consisting of a world-class museum and public gathering space for community programmes.

He said: “I didn’t start off as president, I started off right down the street. And the lessons I learned in these neighbourhoods ended up shaping the rest of my life.

“The Obama Presidential Centre is our way of showing young people everywhere that they can do the same.”

Since leaving office, Mr Obama continued to live in Washington DC in the ​​Kalorama neighbourhood to allow his youngest daughter Sasha to finish high school.

The family also own an £8.97million ($11.75 million) seven-bedroom mansion in Martha’s Vineyard, Massachusetts.

The house sits on a 29-acre estate with an outdoor swimming pool, sea views and a private beach and boathouse.

A history of US Presidents (Image: EXPRESS.CO.UK)

Mr Obama returned to the White House on Tuesday, April 5 – the first time since leaving office – to participate in a celebration of the Affordable Care Act (ACA).

During the event, US President Joe Biden announced and signed an executive order to expand affordable health care in extension to the ACA Obama signed in 2010.

Vice President Kamala Harris praised Obama for his “vision and leadership” that “laid the foundation for this groundbreaking legislation”.

Mr Obama told NBC on Wednesday, April 13, how his life had changed since leaving office.

He said: “There are times when I miss the work. I don’t miss the hoopla though.”

He added: “And we’re finding we can be really productive, contributing citizens in all kinds of other ways.”