What is Rhea's downcycle? Investing Explained

INVESTING EXPLAINED: What you need to know about Rhea’s downcycle, a bear market theory expounded by Robert Rhea, an investor in Great Depression

In this series, we bust the jargon and explain a popular investing term or theme. Here it’s Rhea’s downcycle.

Who? or should that be what?

It may sound like a new exercise craze involving a bike, but it is a stock market theory expounded by Robert Rhea, an obscure investor at the height of the Great Depression when share prices were at their lowest point.

Suddenly Rhea’s thinking is seen as relevant. His theory is being talked about, amid global market turbulence that is causing fear and confusion among investors. 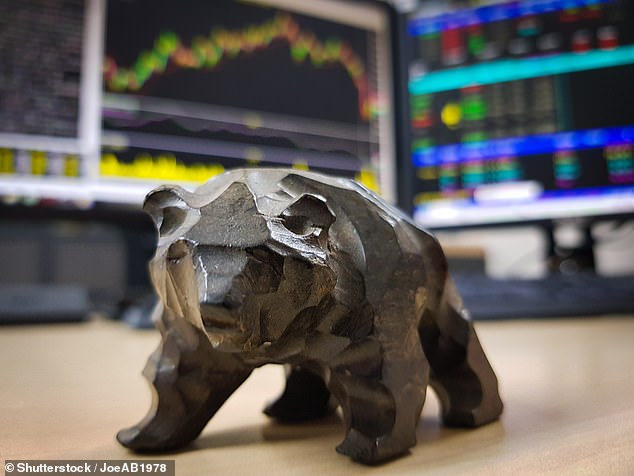 Rhea argued that a bear market (a lengthy downturn) has, typically, three phases: ‘The first represents the abandonment of hope upon which stocks were purchased at inflated prices.

‘The second reflects selling due to decreased business and earnings, and the third is caused by distress selling of sound securities, regardless of their value, by those who must find a cash market for at least a portion of their assets.’

Americans use the term ‘earnings’ when we would use ‘profits’.

Why is it relevant?

Analysts are looking for ways to accurately judge whether we could be in phase one, or maybe phase two of a bear market – usually defined as a prolonged 20 per cent fall in share prices from their most recent high.

Unfortunately, at the moment, they do not agree on this crucial point.

A bear market is so-called because this creature puts its head down when approached by a prey.

A bull market, a period in which share prices are rising, takes its name from this animal’s tendency to raise its horns when threatened.

What did Rhea write?

He was the author of the Dow’s Theory Applied to Business and Banking, a guide published in 1932 that focuses on the characteristic signs of a surge or descent in share prices.

His work was influenced by the events of the 1929 Wall Street crash, but it was also based on a theory expounded by Charles Dow in 1902.

This states that the stock market is on an upward trend if one of its averages – the Dow Jones Industrial Average, say – advances beyond a previous key high point, and this is accompanied by a similar increase in another index.

Dow, a statistician, was the founder of Dow Jones & Company, the publisher that set up the Wall Street Journal newspaper and also created the indices of that name.

What did he say about bull markets?

Aa with bear markets, these have three phases: ‘The first is represented by reviving confidence in the future of business.

‘Second is the response of stock prices to the known improvement in corporate earnings, and the third is the period when speculation is rampant, a period where stocks are advanced on hope and expectations.’

Does he still matter?

Definitely. He is considered the father of technical analysis of stock markets.

Lately his fans, some of whom share their views on Twitter, have been highlighting Rhea’s most memorable saying: ‘No profession requires more hard work, intelligence, patience, and mental discipline than successful speculation.’

Share
Facebook
Twitter
Pinterest
WhatsApp
Previous articlePoll reveals ‘Rejoiner alliance’ to reverse Brexit WILL happen at the next election
Next articleDR MICHAEL MOSLEY: I'd have my brain zapped if it helped me quit my chocolate addiction
RELATED ARTICLES
Business