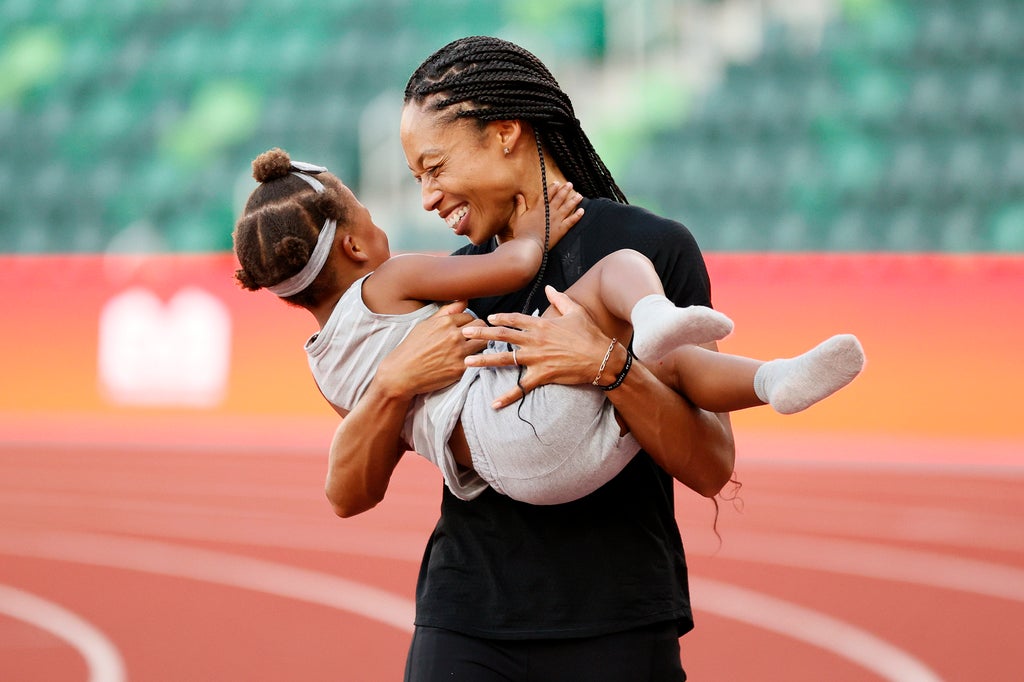 She is heading to Tokyo for her fifth Olympics and needs just one medal to become the most decorated female athlete in Olympic track and field history.

And in doing so Allyson Felix would also tie Carl Lewis for the most ever medals by a Team USA track and field athlete.

Felix, 35, has won six gold medals and three silvers since making her Olympic debut in 2004 in Athens, where she won silver in the 200m.

In Tokyo Felix is set to run in the 400m after finishing second in the US trials, and could also take part in the 4x400m relay, and 4×400 mixed-gender relay.

It will also be her first Olympic Games as a mother, having given birth in 2019 to daughter Camryn via emergency c-section just 32 weeks into her pregnancy.

The youngster was delivered safely weighing just 3lbs 8ozs, and spent a month in the neonatal unit before coming home to Felix and husband, fellow sprinter Kenneth Ferguson.

“It was really special,” she told NBC after qualifying for Tokyo.

“I shared a moment with my own daughter and obviously she can’t understand everything that’s gone on for the past couple of years, but I just can’t wait to share this story with her – about how she’s been my driving force.”

In 2019 Felix spoke out against her sponsor Nike for cutting her pay after her daughter’s birth.

After she wrote a scathing New York Times op-ed, the company announced a new maternity policy that guaranteed an athlete’s pay and bonuses for 18-months surrounding pregnancy.

“I am extremely proud to be an elite athlete and to have this legacy on the track, but it doesn’t stop there,” Felix said.

“I am more than a sprinter. More than an Olympian. I am a mom.

“If I can use my voice and platform to speak on the inequalities facing Black pregnant women and the Black maternal mortality rate, I absolutely will.”

Felix has now also teamed up with her sponsor Athleta, whom she left Nike for, to create The Power of She Fund to provide $200,000 in childcare grants for mothers who are also athletes.

After leaving Nike she was also left without a sponsorship deal for her running shoes.

She then co-founded a lifestyle and sneaker company with her brother and manager, Wes Felix, called Saysh, which has already raised $3m in funding.

She will wear a custom-designed pair of spikes in Tokyo and the brand will release its first sneaker, specifically designed for a woman’s foot, in September.

On the track, Los Angeles-born Felix also has 18 World Championship medals, of which 13 are gold.

She turned professional before going to university but graduated from the University of Southern California.

During the pandemic Felix did her training in any space she could find in crowded Southern California, including, grass medians, trails and neighbourhood streets.

The International Olympic Committee has banned any acts of protest on the medal stand at the Games, even though athletes can do so before their events.

And Felix says she has not ruled out making her own voice heard.

“There are real-world issues going on, and it doesn’t feel in the Olympic spirit to be censored,” she told TIME.