Why it could pay to buy your holiday money NOW! and avoid using a card

With most travel restrictions finally over, bookings for overseas breaks are soaring.

For those heading to Europe, the good news is that your spending money will now go further than it did a year ago.

But economists have warned that the improved exchange rate may not last, so you may want to think seriously about buying at least some euros now.

For those heading to Europe on a much-needed break, the good news is that your spending money will now go further than it did a year ago

And if you think your flashy new currency card is good for spending overseas, bear in mind that buying banknotes in advance can often be better value.

Jack Mitchell, head of travel money at currency firm FairFX, says: ‘Most holidaymakers tend to leave it until two to three weeks before they travel to buy currency in cash.

‘If you are happy with the rates now for the currency you need this summer, then you may consider locking in.’

The UK’s strong post-pandemic economic recovery has boosted the pound’s performance against the euro over the past year.

Jonathan Petersen, economist at Capital Economics, says: ‘The UK’s economy has generally weathered the pandemic better than Europe, and as a country it is more isolated from the effects of the war in Ukraine.’

However, some economists believe the euro’s fall could level out.

Ima Sammani, an analyst at foreign exchange firm Monex Europe, says: ‘The pound to euro exchange rate is now similar to where it was shortly after the Brexit referendum and this could be as high as it gets.’

However, travellers heading across the pond to the U.S. are not so fortunate with the exchange rate.

Experts say this is because the U.S. has enjoyed a similarly strong economic recovery and is less impacted by the war in Ukraine.

Mr Petersen says: ‘We forecast that the pound is unlikely to strengthen much more against the euro. However, there could be room for the dollar to do so, which means buying dollars could be more expensive later this year.’

The Post Office has already seen a surge in sales of foreign currencies as British tourists prepare for long-awaited holidays.

The Croatian kuna has proved especially popular, with sales up by 137 per cent last month compared with March 2020.

Travellers will also get more for their money, with the pound 4.9 per cent stronger since April 2020. 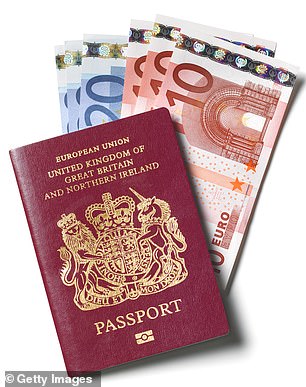 Peak? Last month Sterling reached a five-year high against the euro, with £1 worth €1.22

Holidaymakers heading to Turkey will also do well, with the pound up 116 per cent against the lira over the same period.

Despite the rise in value of the U.S. dollar, it is still the second most popular currency purchased through the Post Office, with sales up 85 per cent between January and March.

Meanwhile, sales of Barbados and Jamaican dollars have risen by 107 per cent and 103 per cent since March 2020.

Nick Boden, head of travel money at the Post Office, says: ‘Our research suggests that pent-up demand is resulting in many Britons planning holidays of a lifetime in some of the world’s most aspirational destinations.’

Shop around for best deals

Holidaymakers are increasingly using cards when spending abroad, which you can top up in advance of your trip.

But research conducted for Money Mail by FairFX suggests cash is often still king — as long as you can dig out the best rate.

Of six High Street bank debit cards analysed, NatWest had the cheapest deal, with fees for a combination of cash withdrawals and overseas purchases at £24.

However, spending €1,000 abroad would still cost debit card holders £887, which is £28 more than if they had bought the euros in cash from John Lewis. 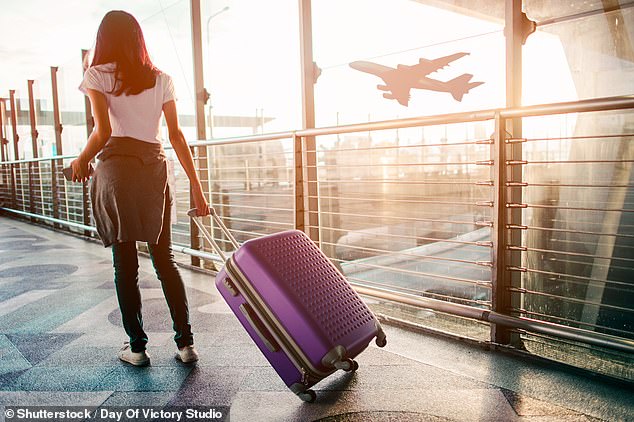 Be prepared: Economists warn that the improved exchange rate may not last, so you may want to think seriously about buying at least some euros now

Lloyds charged the highest fees of the cards analysed, amounting to a £907 cost overall. But this was still cheaper than the average rate of airport bureaux de changes — setting holidaymakers back £997.

Some credit cards charge no fees and could work out cheaper. But you may have to repay your balance in full to avoid the charges.

Last Friday holidaymakers buying U.S. dollars at the airport would have received 18 pc less than the market rate on average, according to FairFX. This is the equivalent of £183 less for every £1,000 exchanged.

By comparison, your local supermarket may offer a generous rate with your weekly shop. Asda has one of the best rates on the market, with each £100 worth €116. At HSBC, it’s €114.

Asda will also price match if you can find a better deal within a five-mile radius.

However, several currency retailers have collapsed since the pandemic began, including department store chain Debenhams and the International Currency Exchange.

Meanwhile, Sainsbury’s is yet to re-open all of its travel money bureaux and RBS is currently not selling any foreign currency ‘as a result of supply chain limitations’.

What will stamp duty changes mean for your house-moving plans?

How to create a reading nook for children in your home