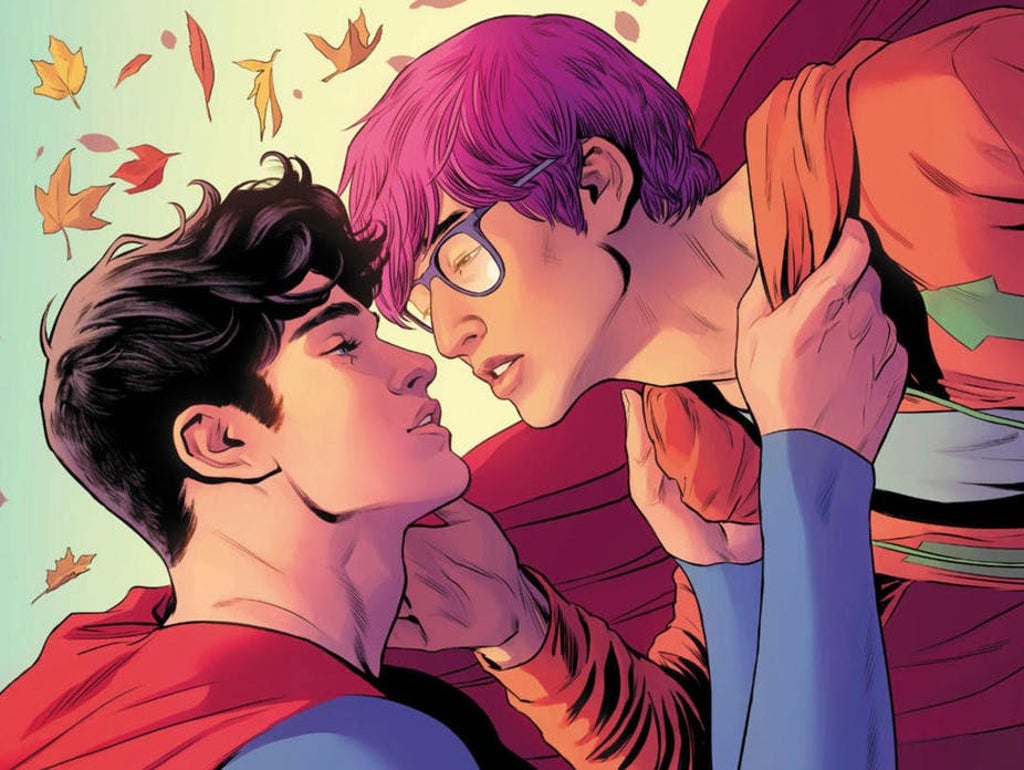 Superman has come out as bisexual. Or more accurately, Superman’s son – Jonathan Kent – who has recently taken on his father’s role in DC Comics, has been depicted kissing another male character in a panel from a forthcoming issue.

Although the wider public has only recently been made aware of this, readers have suspected it for several months after a growing romance between Kent and journalist Jay Nakamura in recent issues of Superman: Son of Kal-El in which he has introduced his boyfriend to his parents.

The revelation that a Superman is bisexual is a big deal in terms of superhero comics but it hasn’t gone down well with everyone. Former Superman actor Dean Cain claimed the move would have been brave 20 years ago but now was “bandwagoning”.

Various Republican senators in the US have complained, including Arizona state senator Wendy Rogers who called him “a woke Superman”. Josh Mandel, who is trying for a senate seat, said, “Bisexual comics for kids [are] trying to destroy America.” And another Arizona Republican, Josh Barnett, asked: “Why does Hollywood have to ruin everything?”

In the book The Superhero Symbol, which brings together superhero scholars from a range of disciplines, the authors note, “While Superman might profess his emblem means hope, the readily recognisable logo has also become a brand every bit as powerful as golden arches or a stylised swoosh.” And his well-known “S shield”, previously associated with a heterosexual man defending “truth, justice and the American way”, is now connected with a young bisexual man.

Many people may have also been surprised to discover that Superman has a son but this is not a new plot point and has been featured several times before – a notable example being one written by Alan Moore in 1986.

On-screen, a seven-year-old Jason Kent has appeared in the film Superman Returns (2006), while current TV series, Superman & Lois, provides the couple with two teenage boys – Jonathan and Jordan – both with powers.

The sexuality of Superman’s on-screen children is yet to be revealed.

Non-heterosexual superheroes are certainly not a new phenomenon. In Marvel Comics, a team of Young Avengers with most members being LGBTQ+ has existed since 2005.

Some have started to appear in the Marvel Cinematic Universe in Disney+ shows, including Wiccan (in WandaVision), and Kid Loki (in Loki), while Miss America is set to be featured in the film Doctor Strange in the Multiverse of Madness next year – as a lesbian, she is Marvel’s first Latin-American LGBTQ+ character to star in a continuing series.

In comics, the X-Men’s Iceman, and the third male teenager to take on the role of Batman’s Robin have both been given same-sex love interests in recent comics. But Marvel has been more circumspect about its more famous character Deadpool, who is identified as bi- or pansexual more in word than deed.

Both Marvel and DC have included narratives about the difficulties of coming out in some stories. A younger version of Iceman, for example, travelled from the 20th-century to the 21st-century so he could embrace his sexuality. Similarly, Batwoman is revealed to have been kicked out of military school, due to the “don’t ask, don’t tell” policy in the US before 2011, which barred openly gay, lesbian or bisexual people from military service.

A teen version of Superman was also featured in early seasons of the TV series Smallville. As was his fond bromance with a young Lex Luthor – which some viewers claimed was queer-baiting. This is when creators hint at, but never actually depict, same-sex romance. So for LGBTQ+ comics readers, seeing a character called Superman genuinely involved in a same-sex relationship is a profound moment.

While DC Comics haven’t been brave enough to give Clark Kent himself a boyfriend, the storyline allows bisexual teens to see themselves reflected in a world-famous character. And seeing Jonathan Kent with an emblem of “hope” on his chest may well help many bisexual or bi-curious teenagers to feel more accepted, too.

Alex Fitch is a lecturer and PhD researcher in comics and architecture at the University of Brighton. This article first appeared on The Conversation.