They are the life-saving devices that people with severe allergies reach for in an emergency — but now doctors are warning that people may not be using EpiPens correctly.

Around 358,000 Britons regularly carry adrenaline auto-injectors or AAIs, as they’re called, relying on them to deliver a vital shot of adrenaline to counter the potentially fatal effects of a severe allergic reaction to food, medicines or insect stings.

Under official guidelines these should be prescribed to people who have had an anaphylactic reaction or who are allergic to ‘high-risk allergic triggers’ such as nuts, although AAIs (which are also known by the brand names EpiPen, Jext and Emerade) may also be prescribed in other cases.

But concerns are being raised by doctors and campaigners that thousands of people may not be using AAIs optimally, making them less effective.

Anaphylaxis occurs when the body over-reacts to a substance to which it is allergic, commonly foods such as milk and peanuts, and medicines (such as antibiotics and chemotherapy drugs). 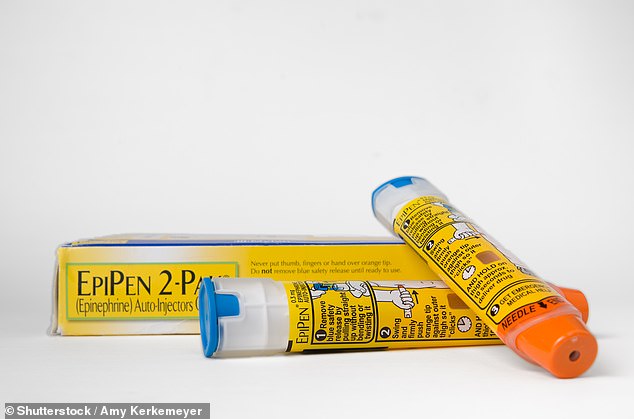 Around 358,000 Britons regularly carry adrenaline auto-injectors or AAIs, as they’re called, relying on them to deliver a vital shot of adrenaline to counter the potentially fatal effects of a severe allergic reaction to food, medicines or insect stings

The allergen sends the body’s immune system into overdrive, releasing chemicals such as histamine to attack it, and causing symptoms including swelling of the lips, tongue and throat, breathing difficulties, wheezing, and a drop in blood pressure.

Hospital admissions for food-induced anaphylaxis — the most common cause — increased three-fold between 1998 and 2018 according to figures from Imperial College London, published earlier this year in the BMJ.

AAIs are the only treatment for anaphylaxis — prescriptions for these devices have risen four-fold over the past two decades as the number of people with allergies increased, according to the study.

In some cases, one shot of adrenaline is required but, if the allergic reaction is severe, two may be necessary.

This is why the UK’s medicine’s watchdog, the Medicines and Healthcare products Regulatory Agency, recommends that people with severe allergies carry two AAIs at all times, with parents and carers also trained to help in an emergency.

Yet around 10 per cent of people may still only be carrying one AAI, according to the charity Anaphylaxis Campaign.

And now concerns are also being raised about where to administer it.

New advice issued last month from the Commission on Human Medicines, which advises the Government on the safety, quality and effectiveness of medicines, states an AAI should be administered at the first sign of anaphylaxis — but does not recommend where the injection should be given.

Previous guidelines advised the injection should be made into the muscle on the outside of the thigh.

The question is whether the second dose — administered five minutes after the first if needed — should be in the same or a different leg.

Adrenaline works by narrowing the blood vessels. In the case of anaphylaxis, this helps to restore heart function and blood pressure which can drop dangerously low.

The concern is that if adrenaline is injected into the same leg twice, the second dose will have little effect as the blood vessels there have already narrowed.

This issue was raised at the inquest of Natasha Ednan-Laperouse, the teenager from London, who died aged 15 from anaphylaxis in 2016, after eating a Pret A Manger baguette that didn’t list the ingredient sesame, to which she was highly allergic. 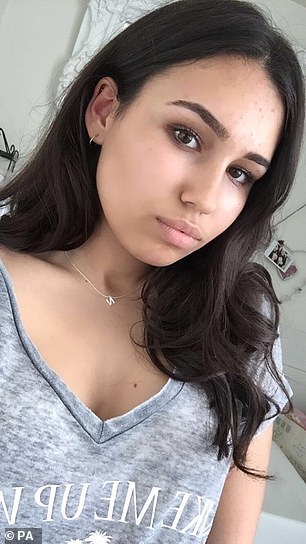 This issue was raised at the inquest of Natasha Ednan-Laperouse, the teenager from London, who died aged 15 from anaphylaxis in 2016, after eating a Pret A Manger baguette that didn’t list the ingredient sesame, to which she was highly allergic

When Natasha had the anaphylactic reaction while travelling on a plane to Nice, her father Nadim administered two doses of adrenaline via an AAI, both in her right outer thigh, but the drug didn’t work.

Asked at her inquest in 2018 why the AAIs had not worked, Dr Alex Croom, a consultant allergist, said it could have been because both shots were given in the same leg.

Natasha’s mother Tanya, who with Nadim set up The Natasha Allergy Research Foundation to raise awareness of food allergies, says: ‘We are very concerned that there is no official advice about where to administer a second AAI in the event of a severe allergic reaction. These are life-threatening situations where every minute counts and optimum use of AAIs is vital.

‘Yet we know from people with food allergies that many who are prescribed AAIs receive no information about where they should inject the second dose.

‘Clarity on their use is urgently needed to prevent more avoidable deaths from severe allergic reaction.’

Dr Mark Porter, a GP in the Cotswolds and TV presenter, also raised concerns about this issue on social media.

He says: ‘The second dose should not be given in the same spot, as adrenaline causes vasoconstriction (reduced blood flow) which could impair absorption of the second dose.

‘So always use a different site. Using the opposite thigh is a simple way to ensure this.’

Yet others say this view is purely based on understanding how adrenaline works, and there is no published research to prove the opposite leg is better than a different site on the same leg.

New advice this year from Resuscitation Council UK, which publishes guidelines on life-saving for healthcare workers, acknowledges a different leg could be helpful — but the evidence is ‘uncertain’.

Dr Paul Turner, a reader in paediatric allergy and immunology at Imperial College Healthcare NHS Trust, who oversaw these latest guidelines, says he believes this advice is ‘appropriate’ as ‘there is no clear evidence that administration into the same leg is a problem’.

He adds: ‘Our experience of advising patients and training them is that people tend to use their dominant hand and may misuse the device if forced to inject into the opposite thigh.

‘Therefore, the bottom line is if it’s easy to use the opposite thigh and you remember, great. But otherwise don’t worry about it. The most important thing is to get another dose in and make sure 999 has been called.

‘There is a real concern that if the focus becomes injecting into another leg, then what is well-intentioned advice might actually end up causing confusion and risk delaying correct and appropriate administration of a second dose — which would clearly be the more important issue.’

Separately, in a bid to prevent avoidable deaths caused by severe allergies, the Government announced last month that EpiPens could soon be available in restaurants, railway stations and other public places.

Can you run up the stairs?

Oh yes. I remember the Duke of Windsor saying about the Duchess: ‘She takes a lot of exercise around the house.’ I do the same — I am always moving about.

Get your five a day?

Probably not always. If I am travelling I often forget lunch or grab a sandwich, but with lockdown I did see the opportunity to punctuate the day with food. My lunch was three slices of bacon and three free-range eggs.

I pop on my bathroom scales pretty regularly. I am just under 6 ft and weigh around 13 ½ stone.

How has the pandemic affected you?

One of my sons was living with me when lockdown began. Literally overnight — like the Russians leaving Moscow before Napoleon’s invasion in 1812 — we left the London flat for my house in the country and didn’t go back. I have never worked harder in my life — finishing one book, starting another and giving lectures all over the world via Zoom.

I will sometimes drink half a bottle of wine at one meal.

Apart from childhood illness, I have been lucky. Eight years ago I had a part of my thyroid removed as I had a swelling in my neck.

I take vitamins C and D3 to help my immune system.

Yes. I take painkillers as seldom as possible.

I wouldn’t reject it, but I haven’t had the need to try it. I cover a lot of royal stuff and the Queen Mother — who lived to over 100 — loved complementary medicine.

There was one time a few years ago when I was for a short while. I’d finished a book and, sometimes, you do feel a bit down when a project ends. And my cat died. Then I remember going to Bodmin to give a couple of lectures and driving home listening to a tape of a terrific book and then feeling lifted.

What keeps you awake?

Sometimes thinking about a book I’m writing will keep me awake, but I normally sleep well. Regularly changing the sheets helps. You feel so much better in freshly ironed sheets.

Wasps. If there is a wasp in the room I would be monitoring it.

Malice In Wonderland: My Adventures In The World Of Cecil Beaton (Hodder) by Hugo Vickers is out now.

Make your own mince pies using wholemeal instead of white flour to increase fibre content.

And sweeten the pastry with blended dates instead of sugar (dates provide added benefits such as polyphenols, compounds that have antioxidant properties). You could even add fresh fruit and veg such as grated carrot to the filling for additional vitamins, minerals and fibre, says Evelyn Toner, a dietitian at foodship.co.uk.

Up to 800,000 insomniacs reliant on drugs can now be given app which helps them sleep easier