Why we left! EU savaged for 'unfair' trade policy as huge international fight breaks out

The EU welcomed more than 40 African leaders to Brussels on Thursday in an effort to reassert its influence on a continent where China and Russia have made hefty investment inroads, and where many felt let down by Europe’s COVID-19 vaccines rollout.

The European Union will offer several packages of support at the summit to bolster health, education and stability in Africa, and will pledge half of a new €300 billion investment drive launched to rival China’s Belt and Road Initiative.

But the EU-AU summit did not go as smooth as Brussels hoped.

The bloc was blasted by Nigerian President Muhammadu Buhari for the “unfair” trade arrangements it has pursued with African countries and its unsustainable approach to migration.

Writing for Politico, the Nigerian leader said the bloc had failed to come up with a solution to mass migration from the African continent to the Europe.

He wrote: “By 2050, Africa’s population of 1.3 billion is set to double, making up a quarter of the world’s total.

“My country, Nigeria, is set to double its population to 400 million by then, surpassing the United States to become the third largest nation in the world.

“This means a huge youthful market right on Europe’s doorstep and — with increased trade — a growing middle class with money to spend.” 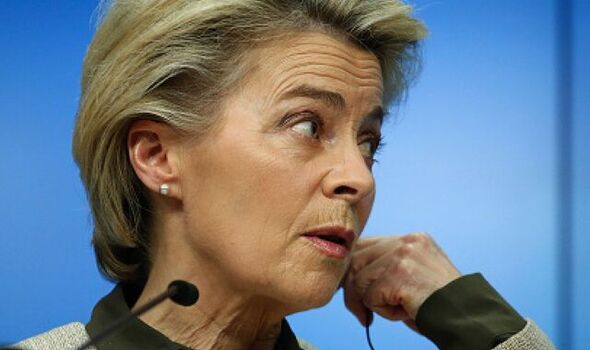 He continued: “However, despite burgeoning possibility, irregular northward migration from my continent drains Africa’s talent pool, while provoking political crises in the EU. Despite its best efforts, Europe will not find a sustainable remedy to this problem by further reinforcing its Fortress Europe approach.

“Instead, more opportunities must be created for Africans at home, providing alternatives to the decision to take a life-threatening boat journey in order to seek them elsewhere.

“The relationship between the EU and Africa must be rebalanced to power job creation. Unfortunately, today’s arrangements do just the opposite.”

He also said the bloc has been unable to come up with the appropriate trade arrangements with the “fastest growing continent on earth”.

“For instance, subsidy-driven surpluses of European milk are powdered and sent to Africa, decimating its diary industry.

“It is a similar story when it comes to wheat and poultry production. Despite having the most under-utilised arable land in the world, Africa remains a net food importer.

“Meanwhile, more than half of Africans work in agriculture, a sector in which sustained improvements offer the fastest path to poverty reduction across the continent.”

He added the bloc is also failing to improve the way it interacts with the African continent when It comes to free trade agreements.

He said: “This is not only a matter of rewriting agreements. We must also change the way we interact. In 2019, the African Continental Free Trade Agreement (AfCFTA) came into effect. It created the largest free trade market in the world, and overtime it will progressively break down tariffs and non-tariff barriers between nations within the continent.

“An inheritance of colonial extraction, trade within the continent currently languishes at 17 percent, compared to Europe’s 68 percent. In fact, Africa trades more with Europe than it does with itself. The free trade area shall rectify this, driving development whilst also diversifying economies.”

At the summit, European and other wealthy nations were also heavily criticised for hoarding protective equipment and later vaccines during the pandemic, with some African leaders saying the slow pace of donations could lead to “vaccine apartheid”.

By the start of February, only 11 percent of Africans were fully vaccinated against the coronavirus – far fewer than in richer parts of the world.

Sierra Leone President Julius Maada Bio challenged Europeans to remember there are “human beings on the other side” in Africa who have been left behind in the unequal global response to COVID-19, adding this has security implications.

There was also dismay over Europe’s travel bans on South Africa after the Omicron variant was detected there late last year.

South African President Cyril Ramaphosa said he and other African leaders would raise the issue of intellectual property rights for COVID vaccines and treatments. Many developing countries want these rights waived, but face opposition from rich nations, including many in the EU.