Will global headwinds, inflation and the cost of living crisis cool the property market?

Not a lot is needed to spook the housing market. But a war in Europe is a different matter all together.

So what will be the fallout when it comes to buying, selling or staying put in our homes?

Has the outlook for house prices changed? 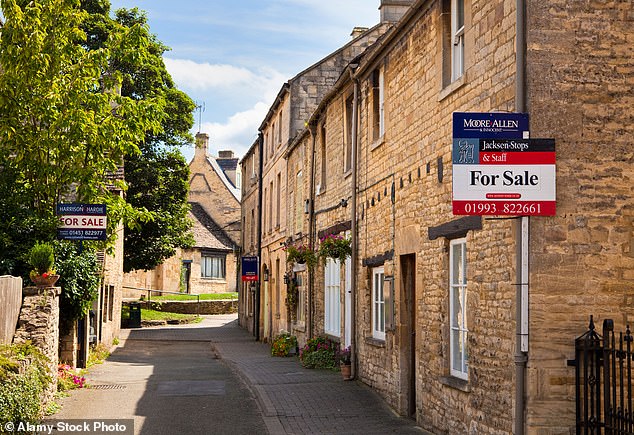 Uncertainty: Houses for sale in Gloucestershire. More properties are coming on to the market, although not enough to meet current demand

This week, Halifax reported that the average house price stands at a record £278,123 — nearly 11 per cent higher than a year ago.

But tax rises and soaring inflation are set to slow the market. The Centre for Economics and Business Research estimates families may face a £2,553-a-year hit to disposable income.

What about the rise in energy prices?

The war in Ukraine could spark more increases in the prices of gas and petrol, especially if there are more bans on Russian coal, gas and oil. Even before the invasion it was forecast that the average energy bill could reach £3,000 by the autumn.

As Ukraine and Russia account for 30 per cent of global wheat supply, groceries will become more expensive.

Russell Galley, managing director of Halifax says: ‘The war in Ukraine is a human tragedy, but it is also likely to have effects on confidence, trade and global supply chains.’

Which areas could be most affected?

First-time buyers could be hardest hit by tax and cost-of-living rises, as Dominic Agace, chief executive of estate agency Winkworth, explains: ‘If more first-time buyers cannot put aside enough money for a deposit, this would affect the values of the smaller properties typically purchased by this group.’

By contrast, Aneisha Beveridge, head of research at Hamptons, says existing homeowners wanting to move ‘should be able to rely on equity in their homes and the billions of savings built up in lockdown’. 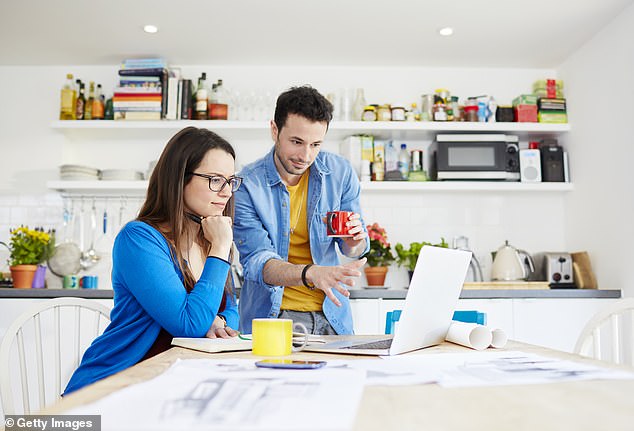 Doing the maths: The typical five-year fixed rate deal has a rate of 2.88 per cent – which highlights how low rates still are

Could prices soon be set to slump?

More properties are coming on to the market, although not enough to meet demand. The mismatch could provide support to prices, according to RICS, the estate agents’ body.

If the war’s shock waves trigger a severe economic downturn, the effects on the property market could be mitigated by changes in home ownership. More people may own their home outright than have a mortgage, meaning they could choose to sit tight.

Most homebuyers with a mortgage should also be able to afford to stay put. Strict lending rules that aim to ensure borrowers are not overstretched mean that very few now have high loan-to-value mortgages.

This means there should be fewer ‘distressed sellers’ willing to accept knockdown prices for their homes to escape their financial plight.

The Bank of England has been raising the base rate in an attempt to tackle inflation — which could reach 8 per cent by April.

But the Bank may now delay further increases, or limit their number, lessening the upward pressure on mortgage rates.

Lenders, however, are on the defensive, having withdrawn hundreds of discounted fixed and variable home loan deals.

If your fixed rate deal is coming to an end within the next six months, it is worth finding out what lenders can offer you now.

The typical five-year fixed rate deal has a rate of 2.88 per cent — which highlights how relatively low rates still are.

Is the race for space continuing?

The pandemic has created a desire for properties with more space, a decent garden or a park nearby, with houses selling more rapidly than flats. Many buyers sought this haven in the countryside or outer suburbs.

But the return of workers to the office has sparked renewed interest in homes in cities. Halifax’s numbers show rises in London lagged other regions, but prices remained high.

Some among those who relocated to the shires are seeking a pied-a-terre. Others are moving back to town because they have found the commute from a remote location too difficult.

There has been a big focus on Russian purchases of London property. But they have been much less active in this market for a while.

Rents are going up, because of a lack of properties coming on to the market. The number of homes available is almost 40 per cent lower than the five-year average, partly the result of landlords selling up following the reduction in their tax reliefs and the extra expense involved in renovations.

Supply chain issues are multiplying the cost of the materials necessary for the refurbishment of all properties.