Western leaders could ban Russia from a crucial global payments system as they step up pressure on Moscow following the invasion of Ukraine.

Sanctions have already been slapped on Russia – including by the UK – in a bid to bring Vladimir Putin to the negotiating table.

‘This is the first tranche, the first barrage of what we are prepared to do,’ Prime Minister Boris Johnson said after he took action against five Russian banks and three businessmen close to President Putin. 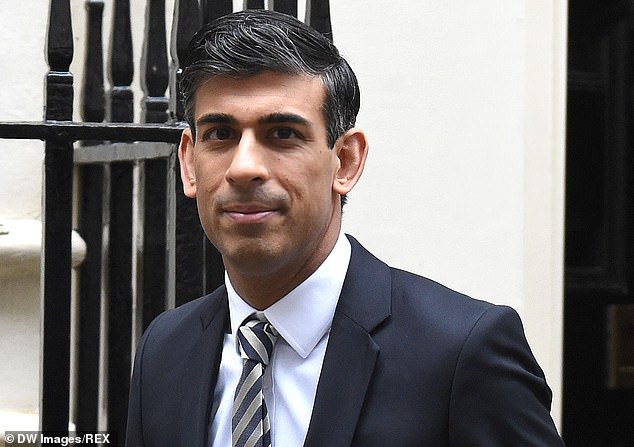 Concerns: A move to ban Russia from Swift is understood to be opposed by the Treasury and Chancellor Rishi Sunak (pictured) amid fears that it would do more harm than good

Another option being talked about by Western leaders, including US President Joe Biden, is to ban Russia’s access to the Swift international payments system.

However, such a move is understood to be opposed by the Treasury and Chancellor Rishi Sunak amid fears that it would do more harm than good.

Swift – the Society for Worldwide Interbank Financial Telecommunication – is little known but is one of the most vital financial systems in the world, underpinning trillions of dollars of transactions a day.

Founded in Brussels in 1973, Swift acts as a messaging system for banks, transmitting payment requests and keeping a record of them in servers in Europe and the US.

It was formed by American and European banks because Citi was developing its own network and rivals hated the idea of a monopoly in private hands. It is now owned by more than 2,000 banks and financial institutions.

It handles 42million messages per day worth £1.1trillion, including orders and confirmations for payments, trades and currency exchanges.

Experts say cutting Russia off would result in a severe disruption in payments for the country’s businesses, damaging its powerful oil and gas industry.

Russia is a frequent user of Swift, accounting for 1.5 per cent of global transactions, and officials have estimated being cut off could cause the country’s economy to contract by 5 per cent.

In 2012 Iranian banks were blocked from Swift and the effects were devastating, with oil exports from the Middle East nation dropping from 3m barrels per day to 1m a day.

Russia currently exports 5m barrels per day, with over half of this being sent to countries in Europe.

Susannah Streeter, investment analyst at Hargreaves Lansdown, said: ‘The move would be sanctions by stealth, hurting Russia without targeting specific companies or banks.

‘Banning Russia from Swift would make it harder to do business with the West, but it wouldn’t cut off vital energy supplies needed.’

Ultimately, the final decision will be taken in Washington, as 40 per cent of Swift payment flows are in US dollars.

Labour party leader Sir Keir Starmer has called for Russia to be blocked from Swift.

It is used by ordinary people as well as businesses, and critics of the plans fear they could be caught up as collateral damage.

There are also question marks over whether sanctions would have the desired effect given that Russia is holding billions in foreign exchange reserves.

A second analyst said: ‘The country’s foreign exchange reserves have reached £470billion, its public debt has reduced, and its debt-to-GDP ratio is at 12 per cent.

‘In the current context, Russia can largely resist Western sanctions. It has also pivoted towards China for a lot of its business.’

Paying via Swift is simple to do and is a service offered by most major banks. It has been made easier in recent years by internet banking start-ups like Wise which offer it for a fee.

But there are major challengers to the system including Facebook’s Diem project, which hopes to use blockchain to disrupt the payments systems.

Some of Swift’s own members are also challenging it. JP Morgan is developing a blockchain system called Onyx with a messaging system called Liink, which is already moving ‘billions each day’.

Russia has also developed an alternative messaging system called SPFS, which handles about a fifth of domestic payments, but this remains less capable and more limited in scope than Swift.