Royals: Prince William in ‘quite a difficult place’ on tour

Prince William’s latest speech in the Caribbean marked a shift in tone from the other public remarks made by the Duke over the past eight days. Speaking during the reception held by the Governor-General of The Bahamas at the Baha Mar Resort, William heavily hinted at the fact the Royal Family would support Belize, Jamaica and the country he and his wife are currently visiting if they decided to cut their ties with the Crown.

He said: “Next year, I know you are all looking forward to celebrating 50 years of independence – your Golden Anniversary.

Commenting on these remarks, the Daily Express royal correspondent Richard Palmer wrote on Twitter: “Prince William has essentially just invited the people of The Bahamas to use 50 years of independence next year to ditch the monarchy and elect a president if they want.” 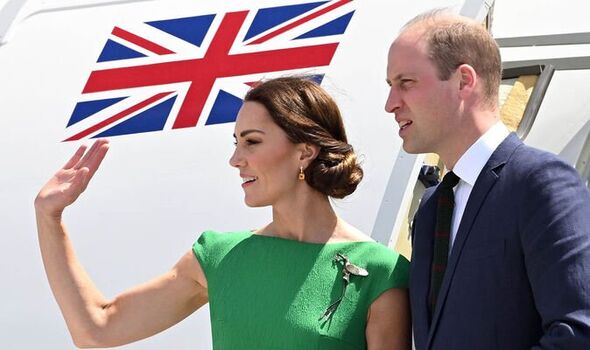 Royal aides, he continued, said William’s comment “reflects what the couple and their entourage have been hearing during a tour designed to celebrate the Queen’s 70 years on the throne in three of her realms – Belize, Jamaica, and The Bahamas”.

He added: “And of course the last bit: ‘Friendship endures’.

“In a way, it is no different to what the Queen, Charles, and other royals have been saying for years.

“I was in Australia in 2006 when Buckingham Palace briefed that the Queen was saying to Australians it’s up to you.”

Despite similarities could be seen with past remarks made more or less subtly by other senior royals, Mr Palmer believes William’s comment may mark a turning point.

He tweeted: “But this really does feel like a watershed moment in the Caribbean.”

Prince William’s candid words on the potential future split from the Crown of these Caribbean countries could be seen as a hint the tour has backfired.

This is because the Duke and Duchess of Cambridge had been tipped by experts to be on a mission to strengthen the ties of the Royal Family with these nations and slow down the republican momentum with this tour.

Prince William and Kate upon their arrival in The Bahamas (Image: GETTY)

Historian and royal commentator Dr Ed Owens told Express.co.uk prior to the beginning of the trip: “The tour as I see it is a goodwill tour in a long line of royal goodwill tours to parts of the Commonwealth and the other realms.

“I think the key question here is are other realms going to be following Barbados’s example from last year and declaring themselves independent of the monarchy by becoming republics?

“I think to some extent these tours are intended to slow that process.”

He continued: “I think the royal tour is absolutely intended to try and slow momentum for a republic, this is particularly the case in Jamaica.”

Speaking before sources claimed Jamaica has already begun the process of removing the Queen as its head of state, Dr Owens added: “I think what William and Kate will be doing is trying to ensure the realms do stick with the monarchy and remain monarchies at least for now.

“The longer-term question is when they accede to the throne after the reign of presumably Prince Charles comes to an end, will they or will they not be King and Queen Consort of Jamaica as well?”

The transitions of some of the Caribbean countries still recognising the Queen as their head of state to a republican status, he believes, is “inevitable” in the long-term.

Kate and William’s tour began last Saturday, when they landed in Belize.

One day prior, some residents at the Indian Creek village, which Kate and William were meant to visit last Sunday, staged a protest which caused the royals to cancel the trip and schedule a visit to another village, Hopkins.

Prince William and Kate during a reception in Belize (Image: GETTY)

Upon arriving in Jamaica on Tuesday, the pair were met once again with protests, this time held by activists calling for slavery reparations in front of the British High Commission in Kingston.

And prior to their arrival in The Bahamas, the country’s National Reparations Committee (BNRC) released an incendiary letter in which they called for slavery reparations.

While it presented some difficulties for the Cambridges, the tour, however, was also a success, as the couple was able to highlight some of the issues they most care about – conservation, early years and the importance of frontline workers.

Moreover, in many of the places they visited across the three nations, Kate and William were met with huge enthusiasm, with large crowds gathering to see them.

The Caribbean tour is ending today.