Gully Foyle #UKtrade, whose Twitter handle is @TerraorBust, took to the social media platform to mock Rejoiners who have been arguing that Brexit has only produced negative results. He said: “In an interesting sign of progress from the now cliche “give me one tangible benefit to leaving the EU” line, I was asked this morning to provide TEN tangible benefits. So I had a think over my lunch break, and here is my list.”

It came as Tory Brexiteer backbenchers have been calling on the UK Government to talk more about the benefits of Brexit which are already happening.

Veteran Conservative MP Peter Bone, who ran the Leave supporting Grassroots Out! during the EU referendum, has recently managed to persuade the Government to slash EU red tape on motor insurance which has saved drivers £50 a year, one of the benefits not in the Gully Foyle list.

Mr Bone said: “We have got to start talking more about the benefits of Brexit. There have been a lot already, even small ones like £50 off motor insurance. But we are not talking enough about them and letting the other lot paint a very negative picture.”

Answering the call, Gully Foyle, who may have taken his social media name from a stranded nomadic merchant in space from the sci-fi classic novel The Stars My Destination, named 10 and then added a bonus four. 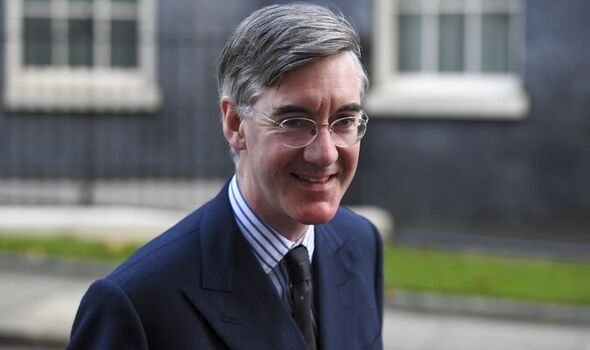 Jacob Rees-Mogg has been tasked with finding more opportunities from Brexit (Image: GETTY)

“From a trade deal perspective, the UK previously had access to around 40 trade deals, as part of EU membership – which it paid billions a year for.

“We have replicated all but 3 of those deals (Bosnia, Montenegro, Algeria) so no longer have to pay ££s each year for them,” he tweeted.

Next tweet in the thread he noted: “Sticking with trade deals – since leaving the EU we have improved the rolled over deals with Japan and Singapore, and have completely new deals with Australia and New Zealand

“We would not have these deals right now, if we had stayed inside the EU.”

“Despite much criticism of the brexit fishing deal he also saw that as a big gain for the UK.

“The gains for the fishing sector have already seen an estimated £50m a year increase, even when taking into account additional costs for paperwork.

Trade and fishing are benefits of Brexit (Image: TWITTER)

Leftwing campaigners could use Brexit freedoms if they want (Image: TWITTER)

“As a whole the UK fishing sector is now better off than it was inside the EU – as confirmed by the NFFO report in Sept ’21.”

He went on: “Want to effect change? There are campaigns by a number of orgs wanting the UK trade deals with Faroe Islands and Israel to be suspended, to try to force political change in these countries.

“That such a suspension is even possible, is down to leaving the EU.”

There is great news for those who care about animal welfare, he noted.

“Since leaving the EU, the UK has implemented policies for the better treatment of livestock, put in bans on the sale of furs and shark fins, and banned the sale of foie gras from force fed Geese. All not possible within the EU.”

And those Remainers who thought the UK would be a fringe minor country with no friends, there is an answer.

“Since leaving the EU, the UK soft power rating has increased, and is now second only to the US.

“This is seen to be due to being able to speak openly to our allies with our own voice, and leverage our own diplomatic heft instead of as a slower and more flaky collective.”

Back to trade and Britain’s approaching membership of the Comprehensive and Progressive Trans Pacific Partnership (CPTPP) will be a big win.

“Alignment with growth markets like CPTPP – by exiting a bloc that was seeing ever decreasing significance to global growth, it allows the UK to align with those markets where growth is most significant over the coming decades, which will be better for UK businesses.”

It has also brought control to our borders and fairness on immigration, he said.

“Leaving the EU has allowed the UK to offer a truly fair immigration policy, that does not favour those who are predominantly white europeans over those from other nations.

“The UK policy now treats everyone the same, irrespective of their country of birth.”

Back on the world stage as an important power he hailed Britain’s leadership over Ukraine.

“Though ultimately the EU member states have mostly followed suit, they have done so weeks later, which could’ve been the difference between winning and losing for Ukraine.”

And it gives the Chancellor to bring in tax cuts on things like VAT which would have been illegal in the EU, he pointed out.

“As mentioned by the Chancellor last week – and confirmed by FullFact this morning – the zeroing of VAT on green energy purchases would not have been possible if the UK was still a member of the EU.”

Not paying revenue to the eU for trade deals and VAT cuts are Brexit benefits (Image: TWITTER)

Companies are directly shipping to UK ports instead of Belgium (Image: TWITTER)

Then came the bonuses.

“As an EU member, around 80% of all customs revenue on imports goes to the budget of the EU. Leaving the UK with only 20% of that revenue.

“Now we are outside the EU, the UK gets to keep 100% of that revenue on imports. Around £3bn a year extra.”

He added: “Companies like Mazda are now shipping directly to the UK instead of to Belgium – in the process providing more jobs to UK citizens, and more choice and better service to their customers. Win-win-win.”

Number 13, lucky for the UK: “Since leaving the EU, the UK has been able to reduce trade barriers with its global partners, meaning it now has less barriers to trade than it did as an EU member, and has jumped to 4th in the 2021 trade barriers index for how free it’s trade is.”

Finally, he noted: “As the President of Nigeria so eloquently puts it: ‘Already the UK Global Tariff (UKGT) has reduced, removed or simplified tax on thousands of imported goods, an important step in reconfiguring Commonwealth trade’.”

Brexit is helping global trade according to the President of Nigeria (Image: TWITTER)

Gully Foyle left out the end of the lawnmower tax, the 20 trade deals due to be signed with US states and trade boosts in the Middle East with a 13 percent rise in Jordan alone.

You can email Mr Rees-Mogg with ideas on [email protected] or send by mail to Jacob Rees-Mogg, Cabinet Office, 70, Whitehall, London SW1A 2AS.

Mark your correspondent “Brexit Opportunity Ideas” and tell Mr Rees-Mogg you are an Express reader.