Drinking herbal tea may spare women the misery of PMS and arthritis, a study suggests.

British researchers found between one and three cups per day of chamomile, rose hip or spearmint tea is linked to a wide range of health benefits.

Another linked drinking spearmint tea to significant falls in pain and stiffness in women with osteoarthritis.

All three teas were also found to help with ‘brain fog’ and short term memory loss, which can occur after giving birth.

Natural occurring chemicals in the teas have been shown to improve the body’s metabolism, regulating blood sugar and insulin.

Some of the compounds — known as phytochemicals — are also found in regular tea, although the researchers did not examine how builder’s brews impact women’s health.

Trendy herbal teas have become more popular in recent years among health conscious millennials and now accounts for around 36 per cent of the UK tea market. 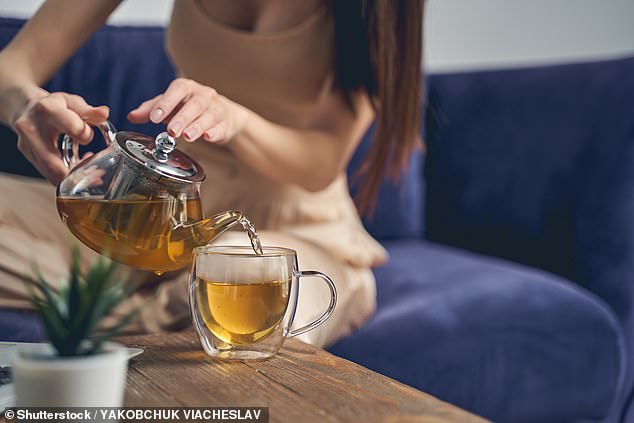 Drinking a cup of herbal tea every day can reduce the pain of PMS and arthritis in women, a study has claimed

They are particularly popular among women — 35 per cent of women are regular drinkers, compared to 25 per cent of men.

The latest study was carried out by X and published in the Journal of Nursing and Women’s Health.

What PMS and what are its symptoms?

PMS (premenstrual syndrome) is the name for the symptoms women can experience in the weeks before their period.

The phrase ‘premenstrual tension’ was first coined in 1931, and the term premenstrual syndrome some 20 years later.

While experts advise trying to manage symptoms by eating healthily, getting enough sleep and gentle exervcise such as yoga, treatments for more severe cases include taking the contraceptive pill, cognitive behavioural therapy and antidepressants.

The NHS recognises PMS as a condition, but says it is ‘not fully understood’ why women experience it, saying only that it ‘may be because of changes in your hormone levels during the menstrual cycle’.

They found teas the sweet-spot for brewing teas was between five and 15 minutes, which allows natural occurring chemicals to infuse in the water.

The researchers looked at nine studies that took place in the UK, Iran, Taiwan, Turkey and Canada.

The number of women taking part in the studies ranged from 21 to 130 and included females of all ages.

One paper showed drinking chamomile tea every day reduced anxiety in 58 per cent of the 179 women studied.

In another, having two cups of rose tea per day was shown to reduce menstrual pain in 130 teenage girls.

A third study showed two cups of chamomile tea had similar effects, with students who regularly had the drink having significantly lower menstrual pain, stress and anxiety than the control group.

One cup per day of the drink was also shown to significantly reduce poor sleep and depression in another study.

Chamomile is one of the oldest medicinal plants in the world, dating back to the ancient Egyptians, who used it to treat colds.

Over the years it has been used to treat skin conditions and fevers, but has been found to offer a variety of other health benefits in modern times.

Chamomile has also been touted for its cholesterol-lowering, antioxidant, antimicrobial, anti-inflammatory and anti-platelet effects.

Papers have also shown rose tea to have beneficial effects due to its high vitamin C content, with one showing the drink could help ease congestion and coughing.

And spearmint tea has also been shown to lower blood pressure, alleviate nausea and improve memory.

Dr Catherine Hood, a GP specialising in women’s health in London who was not involved in the study, said: ‘To date we have underestimated the significant effect that hormones have on women’s health.

‘The findings of this new research review suggest that certain herbal teas, be that German Chamomile, Rose Hip or Spearmint, can have real benefits for a range of conditions.

‘The emerging evidence of the benefits of herbal infusions is fascinating and it will be exciting to see what future studies can add to our body of knowledge.

‘Research like this into women’s health issues can only help us live longer, healthier lives.’