The son of Zoe Ball and Fatboy Slim has revealed how his parents told him he was ‘living in fantasy land’ when he launched his music career after becoming a lockdown raver.

Woody Cook, 21, decided to follow in his DJ father’s footsteps after playing impromptu sets at his halls of residence at Bristol University during the height of the Covid pandemic.

After spending his teenage years partying, the youngster said his celebrity parents were doubtful he was serious about his plans.

But he said the response from his TV presenter mother and music legend father ‘spurred him on’ and led him to take their long-standing advice to learn ‘to stand on my own two feet’.

Woody told MailOnline: ‘They were hesitant about my plans. I don’t think they believed in me. I think that’s the job of good parents, not to believe so that you can prove them wrong. 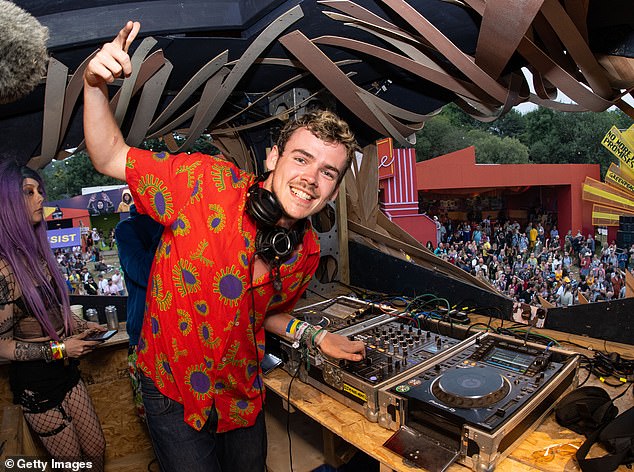 Woody Cook (pictured) says the job of a good parent is to ‘not believe in your children’ so that they can prove you wrong. He says his parents taught him to work hard and spurred him on

‘If they did believe in me and I wasn’t working very hard then they’re not doing the right thing. They really spurred me on.

‘It has been a beautiful moment to be able to leave the nest and stand on my own two feet.’

Woody told how he ditched his easy going attitude, gave up drinking and set up his own company Truth Tribe.

And it appears his hard work is paying off after landing high profile gigs at Glastonbury, Ibiza and Brighton Pride.

Next up he is performing at the Mucky Weekender – a two day music and arts festival on September 9 and 10 in Winchester, Hampshire.

He said of his parents: ‘Just being able to say ‘I told you so’ was really good after they told me I was living in a fantasy land and I was being unrealistic.

‘I said, ‘No but look here. I’ve got blooming spreadsheets. I’ve got bookings’. They said ‘You live in a fantasy world. It’s all in your head Woody’. I said ‘There are contracts! To be able to turn around and really smugly say ‘I did tell you so’ – I only said it once.

Woody admits he’s had a privileged background as the son of parents worth an estimated £35 million.

But he told how the couple – who split up in 2016 after 18 years together – always insisted he had to make his own way in life. 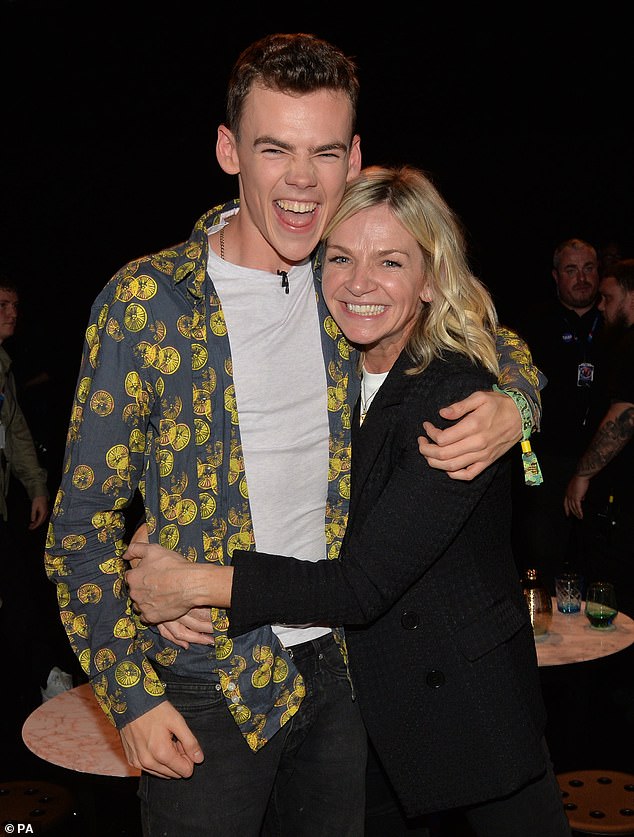 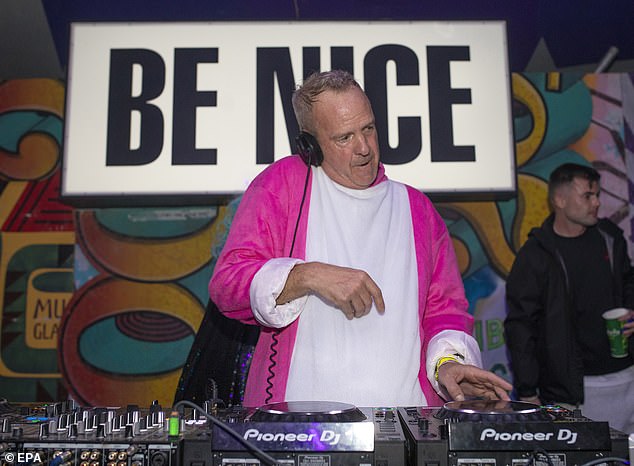 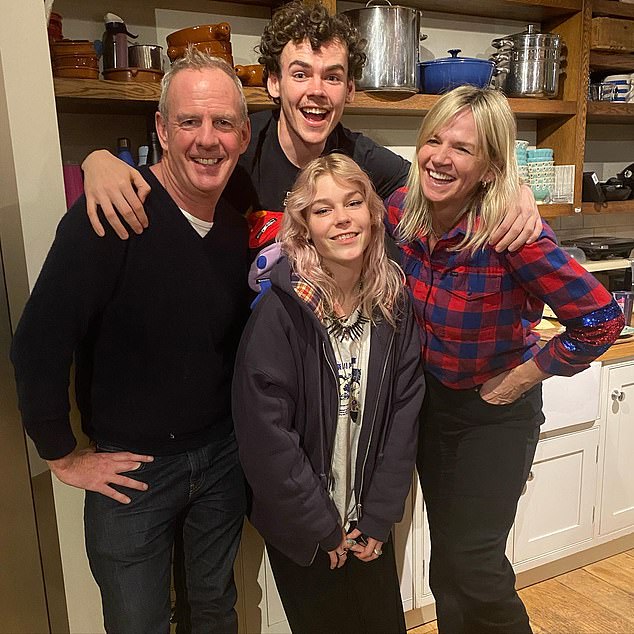 Speaking of the influence his mum and dad (pictured) had on him, Woody said: ‘The best gift they have given me is the way they raised me. Give a little love and it all comes back to you.’

He said: ‘From when I was about seven or eight years old, my dad said ‘This is my house. I earned this house. If you want cool stuff you have to earn it for yourself’.

‘You were just born lucky. You didn’t do anything to earn any of this so don’t feel like any of this is yours.

‘For a long time I didn’t really care enough to want to go and do anything and then when I found this passion I found a way through. I want to be self supportive and I want to do my own thing.

‘I think it’s really important. If you rely on somebody else it’s like you haven’t done it for yourself.’

Speaking of the positive influence his family have had on him, Woody said: ‘The best gift they have given me is the way they raised me. The lessons they taught me. Give a little love and it all comes back to you.

‘Their outlook on life is the biggest gift they have given me and that is second to none.

‘I share a lot of my parents’ interests. They have their own winning formulas in their own way.

‘They have also been surrounded by such incredible people their entire lives. If you have the right people around you you can do way more.

‘My dad is a fountain of wisdom. He’s got so many sayings and adages. He’s learned from so many wise people. 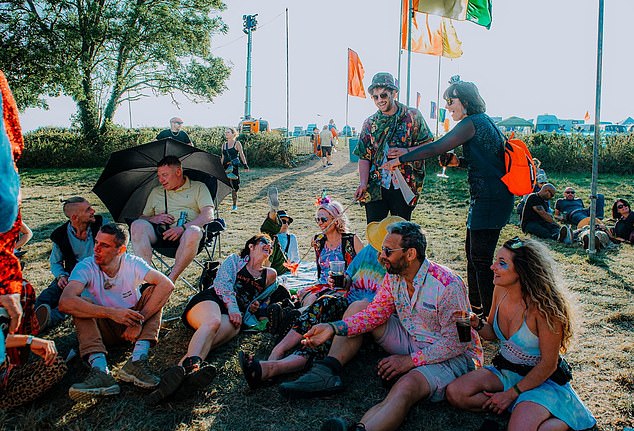 Woody’s hard work is paying off after landing gigs at Glastonbury, Ibiza and Brighton Pride

‘I guess when you work with all those people in the industry who have done so well, each of them has a bit of knowledge to tell you.’

Woody said he had always been passionate about music.

But it was only during the Covid pandemic that he realised he wanted to focus on being a DJ.

He told how he had ‘a captive audience’ with students forced to remain inside their halls of residence while he was studying for his film and theatre degree.

Woody said: ‘I didn’t intend to do this. I knew I wanted to work with people. I really couldn’t have done an office job.

‘The pandemic and the lack of going out made me become the party really. I couldn’t go out and I figured I wanted to listen to good music.

‘Going to uni no-one could go out but we could all hang out in a big 400-person accommodation. 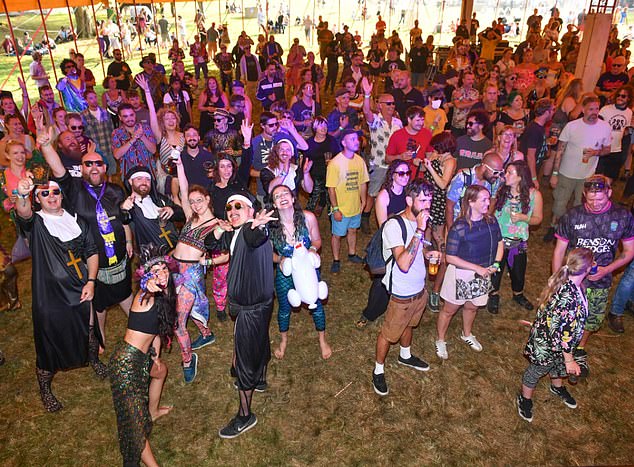 Next up Woody is performing alongside the alongside the Dub Pistols and Dreadzone at the Mucky Weekender – a two day music and arts festival next month in Winchester, Hampshire 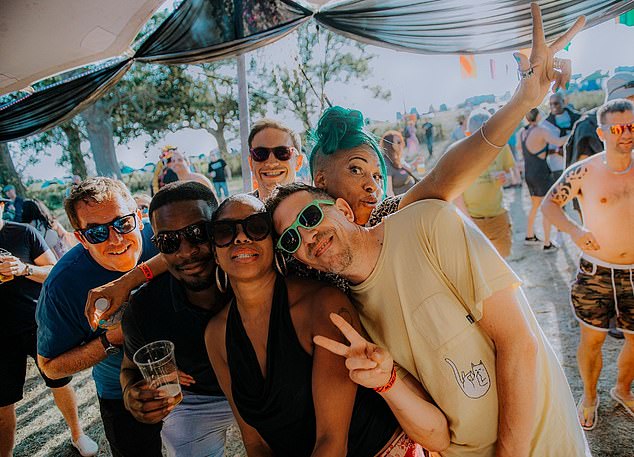 Curator Barry Ashworth front man of Dub Pistols said; ‘We are so excited about Woody, he’s a talent to look out for, expect an energetic set from him – it’s going to be one big party.’

‘I was in a very fortunate position to be surrounded by my mates. Instead of being home alone. I had all the people my age and I could explore music.

‘I was just playing music all night every night. I had lots and lots of alcohol in my room. I had a captive audience and that’s where I cut my teeth.

‘I have been in love with music for a very long time. I’ve always wanted to make music but I didn’t know what form it would be in.

‘When I was doing it at first it was quite tough. I had a go at it and at first my friends weren’t sure but then they would say ‘Oh my God, you’re really on to something’, suddenly I found I had a flair for it.

‘When the world reopened everyone was going out clubbing and I was like ‘You don’t want to come and hang out in my room anymore. I’m still playing music’.

Woody has starred with his mother on Celebrity Gogglebox as well as appearing on reality game show The Circle and ITV’s Cooking with the Stars.

While he described his TV work as ‘an incredible experience’ he’s keen to get away from being seen as a ‘TV personality’ making his fame through reality shows.

He said: ‘My craft is in music – making, producing and playing. There’s something calling me to do more presenting stuff but I would want it to be more in the sphere of music.

‘I went from being a pretty laid back person to someone who will be doing something for 17 days straight without any days off – but when you are doing what you love it doesn’t feel like work.’

Woody says he’s excited ahead of his Mucky Weekender gig alongside the Dub Pistols, Dreadzone, Hollie Cook, Eva Lazarus and many more.

Curator Barry Ashworth front man of Dub Pistols said; ‘We are so excited about Woody, he’s a talent to look out for, expect an energetic set from him – it’s going to be one big party.’

Tickets for the Mucky Weekender can be purchased here.