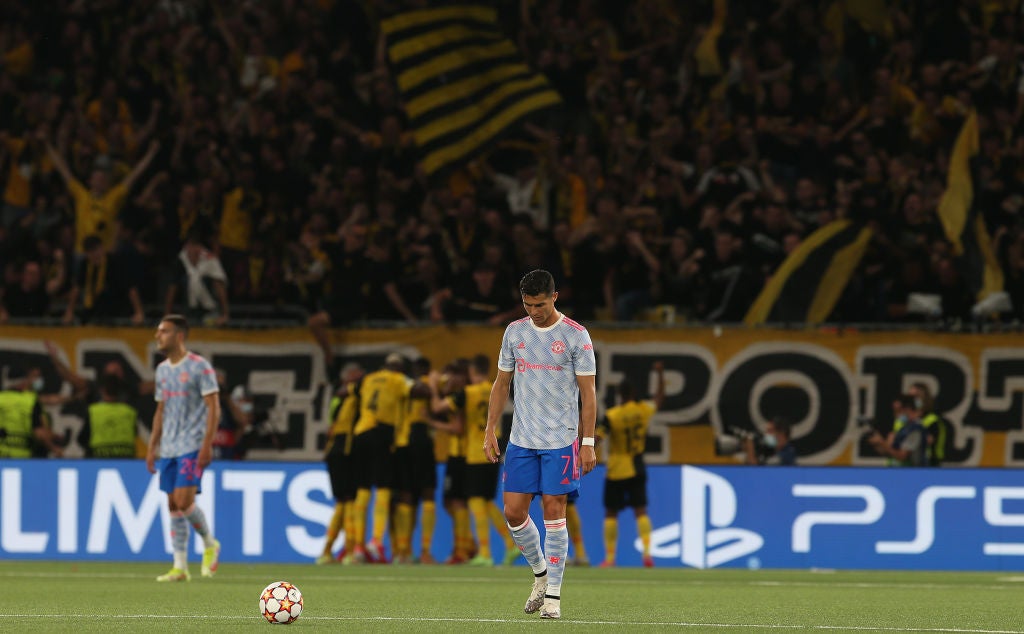 It took less than a quarter of an hour for Cristiano Ronaldo to score the third goal of his second spell at the club, finishing at the far post after a great outside-of-the-boot cross from Bruno Fernandes.

United looked to be well in control but a little over half an hour in they were reduced to 10 men, Aaron Wan-Bissaka shown a straight red card for a desperately poor attempted tackle, with Young boys creating a few openings before the break – all denied by David de Gea.

After the break it was one-way traffic and the pressure told when Nicolas Moumi Ngamaleu poked home a cross from the right for the equaliser, and despite a fine late tip-over from David de Gea, United left Switzerland empty-handed after Jesse Lingard’s back-pass was intercepted by Jordan Siebatcheu to net a 95th-minute winner.

Here are the player ratings from the Wankdorf Stadium on Tuesday night.

David de Gea – 7. Two decent saves from low strikes in the first half. No real chance for the equaliser or winner.

Aaron Wan-Bissaka – 4. Not much involved in productive build-up play and then sent-off on 35 minutes for a terrible lunging tackle which caught his man high on the ankle.

Victor Lindelof – 5. Struggled with the pace of Elia running in behind. Better in the three, but still not his best game.

Harry Maguire – 8. Did his work well, clearing everything that came his way and helping to maintain the defensive line.

Luke Shaw – 7. Battled well, got forward at times and was aggressive in his approach. Pinned back all second half.

Fred – 8. A little hit-and-miss with his passing, but plenty of endeavour and energy. Vital for breaking up the constant possession Young Boys had after the break.

Donny van de Beek – 6. Hard to suggest he made his case for more regular inclusion; equally hard to suggest there was much motivation in him trying harder to do so given he’ll be left out again next time around anyway. Subbed at the break.

Jadon Sancho – 5. Hadn’t performed well before being subbed in the Wan-Bissaka-enforced reshuffle. Slow to release the ball, didn’t beat his man and looked short of confidence.

Bruno Fernandes – 7. Magnificent assist – then it was more industry than magic, which he produced willingly.

Paul Pogba – 6. Somewhat marginalised by the home team working hard to surround him in possession and a few team-mates drifting into his channel. Much better when centrally in the second half to help United move the ball upfield.

Cristiano Ronaldo – 7. Had barely seen the ball roll his way before he buried the opener. Harder-working than he’s often given credit for out of possession, especially after the red card. Rubbish dive when he should have scored a second after the break.

Rangers vs Lyon live stream: How to watch Europa League fixture online and on TV tonight